Annexation, cityhood is the top story of 2014

Annexation, cityhood is the top story of 2014 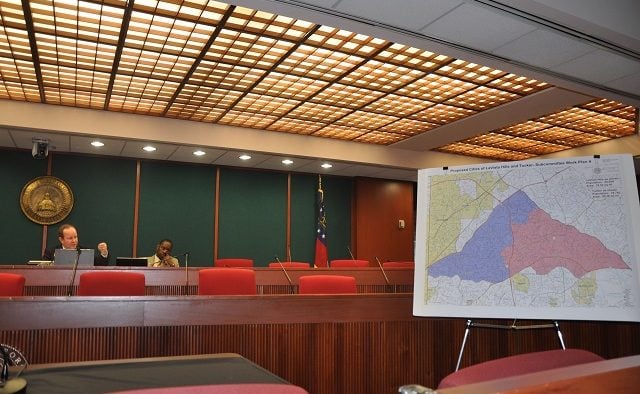 A map that settles the border dispute between the proposed cities of Tucker and LaVista Hills was unveiled on Dec. 19. Photo by Dan Whisenhunt
Share

Readers voted with their eyes in 2014 and we published the list of most-read stories on Dec. 26.

Their list isn’t all that different from ours. In addition to page views, we also considered each story’s overall impact on the community, both in the short and long term. The biggest stories of 2014 are …. 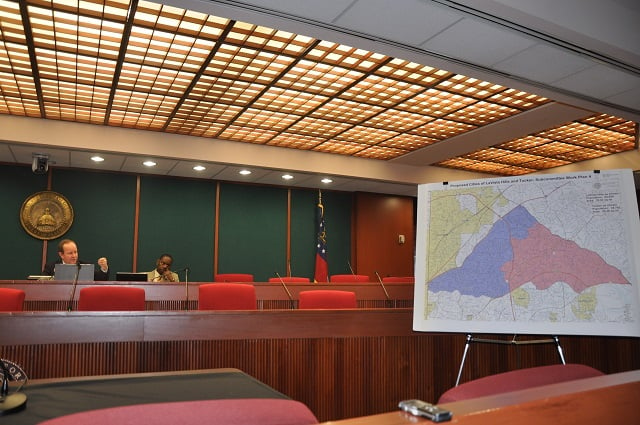 A map that settles the border dispute between the proposed cities of Tucker and LaVista Hills was unveiled on Dec. 19. Photo by Dan Whisenhunt

DeKalb County residents are stuck with uncertainty as 2014 draws to a close.

Two proposals to create new cities – Tucker and LaVista Hills – are likely to advance next year in the General Assembly in 2015, though it’s not a certainty the bills will survive the session. Both cityhood groups will have to update feasibility studies and a city that doesn’t produce enough tax revenue to provide services will have a hard time winning approval.

In addition to the city proposals, cities in DeKalb are pushing their own annexation proposals to claim unincorporated areas. Some of these proposals overlap.

No one saw this coming.

Ed Rieker abruptly resigned as the city’s mayor in October to pursue a university teaching job. Rieker was finishing up his second term as mayor, a term defined by renewed signs of life in the city’s downtown. The mayor was credited with helping to spur that economic development.

But he got into hot water with residents after they discovered he’d asked state Rep. Karla Drenner, D-Avondale, to introduce an annexation bill without the City Commission’s approval. Rieker’s resignation came a day after a heated Oct. 1 work session to discuss the annexation issue.

Since Rieker’s resignation, mayor pro tem Terry Giager has become the interim mayor. The city will hold a special election for the mayor’s office in March.

The possibility of Decatur and Avondale Estates becoming the next Google Fiber cities has been a dangling carrot for most of the year. Google in February announced its list of more than 30 potential fiber cities and said to expect an announcement by the end of 2014.

All of the cities in the Atlanta area completed the Google Fiber checklist by the May 1 deadline. Then the waiting began.

This month Google said that the wait would be a little longer. A spokesperson said, “While we were hoping to have an update for cities before the holidays, we have a bit more work to wrap up; we’ll be back in touch sometime early next year.” A fire destroyed a home on Lakeshore Drive in Avondale Estates on April 12.

Tami Willadsen and her daughter, Jess, 10, a student at the Museum School, died in the blaze. It severely wounded Tami’s son, Jack, 5, and injured her husband, Dave. The tragedy prompted an outpouring of grief from the Avondale Estates community, which rallied behind the Willadsen family.

Investigators weren’t able to determine what started the fire.

Homicides are rare in Decatur. A homicide involving a victim who doesn’t know the perpetrator is rarer still. Karen Pearce, 44, was leaving a restaurant in downtown Decatur on Dec. 6 when she was gunned down by an unknown assailant. Pearce, of Smyrna, worked as a stylist in Marietta.

For days police said very little about their investigation into who killed Pearce. On Dec. 11, a MARTA police officer arrested Aeman Lovel Presley, 34. While in police custody, Presley allegedly confessed to Pearce’s murder. Police allege that Presley is a serial killer responsible for the deaths of at least three other people. Commerce Boulevard in Decatur on Jan. 28. Photo by: Dan Whisenhunt

Winter weather wreaked havoc on Atlanta in early 2014, closing schools and offices for days. The storm that struck the city on Jan. 28 showed how woefully under-prepared the Atlanta Metro area was to deal with two inches of snow. Schools dismissed at different times, creating an epic traffic jam that saw some commuters sitting in their cars for hours and spending the night at places like Home Depot.

The bungled response to the storm led to an apology from Gov. Nathan Deal and the establishment of a Severe Winter Weather Warning and Preparedness Task Force.

Days later, the governor and emergency officials got the chance for a do-over as winter weather returned to the area. Schools cancelled classes and many offices closed, averting a repeat of the Jan. 28 fiasco. Many school systems had to adjust their calendars to make up for the lost days of instruction.

A fallen tree near Adair Dog Park in Decatur, Ga. The tree fell on the night of March 12. File Photo by Dan Whisenhunt

Decatur had the most contentious debate over the issue.

Other Metro Atlanta cities have looked at revising their ordinances, including Avondale Estates and Brookhaven.

The cycling community was outraged after the driver of a red Doge Nitro struck cyclist Greg Germani in June. Atlanta Police distributed a video of the car suspected of hitting Germani. Police made two arrests in the case. They charged Joseph Alan Lewis with intentionally hitting Germani with his red Dodge Nitro and charged his girlfriend, Shanelle Woodard, with helping him cover up the crime.

Lewis remains in jail, and Woodard is currently out on bond awaiting her day in court. Germani, the man behind the popular Atlanta Time Machine website, is still recovering from a brain injury he suffered as a result of the incident.

More apartments are on the way for Decatur, Avondale Estates and Kirkwood.

In September, The Place on Ponce in Decatur became the first of several local apartment projects to begin leasing to tenants. There are 234 units planned for that project. There are two additional projects in the works for Decatur. The Trinity Triangle project at East Howard and Trinity Place is expected to get underway soon. It will add more than 200 apartment units to the city. There’s another apartment development at 160 Clairemont that’s currently under construction, which will have more than 160 apartment units.

Euramex Management this year announced plans to develop about 250 apartment units behind Kirkwood Station. The same company is also planning a mixed use development on the Fenner Dunlop property in Avondale Estates.

Members of the Atlanta Board of Education at BOE’s April 14, 2014 meeting. – File Photo by Dan Whisenhunt

The Atlanta Public Schools Board of Education in April voted to close Coan Middle and combine it with King Middle. The two schools combined at the beginning of this year and all students are attending classes at the current Coan campus while King Middle is renovated. Students are expected to move back to the King campus in August of 2016.

The closure was part of a larger plan to improve middle school education in the Jackson High School cluster. Both King and Coan had experienced dwindling enrollment, largely due to the popularity of Drew Charter School. Some Toomer Elementary parents had hoped former Superintendent Erroll Davis would support their proposal to turn Toomer Elementary into a K-8 school, but Davis declined, recommending that APS combine Coan and King. Davis made his recommendation just prior to stepping down as superintendent. Meria Carstarphen became the new APS superintendent right as the plans for Coan and King fell into place.