Annexation questions? Gather around and listen

Annexation questions? Gather around and listen 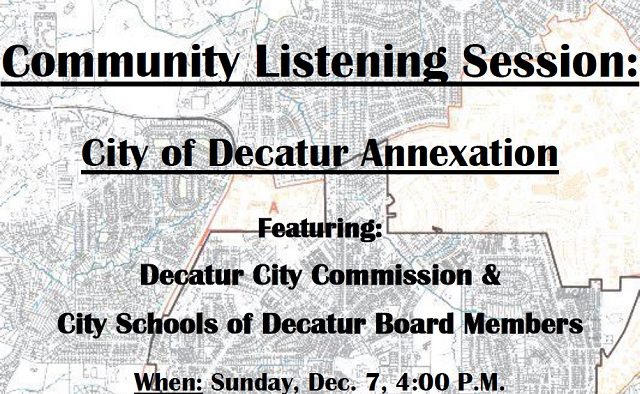 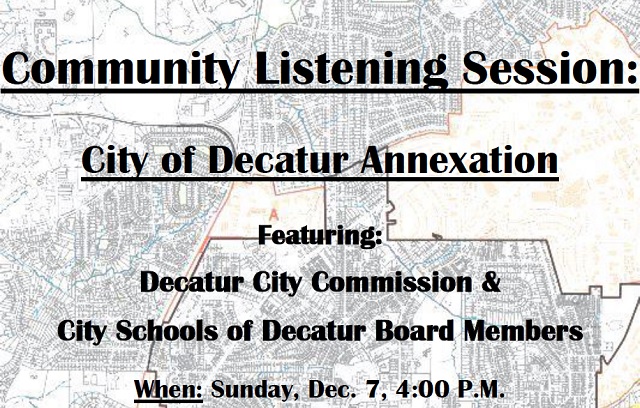 Flyer for the Community Listening session.

Some civic-minded Decatur residents have organized a “Community Listening Session” about the possibility of annexing more territory into the city limits.

City Schools of Decatur Board

The meeting will occur one day before the City of Decatur releases its updated annexation master plan. It had been previously scheduled for release on Dec. 1, but was delayed until Dec. 8. The city’s considering expanding its borders to include 1.6 more square miles, taking in commercial areas like Suburban Plaza and Emory Commons.

City and School officials have been grappling with the plan for several weeks, trying to balance a need for additional space with a surge in enrollment growth in the city’s schools. Decatur’s focus on annexation is part of a broader issue of new cities being created in DeKalb County. Because of the general dysfunction of DeKalb County, groups behind the proposed cities of LaVista Hills and Tucker are trying to get bills passed in the 2015 General Assembly to allow for a vote on their proposals.