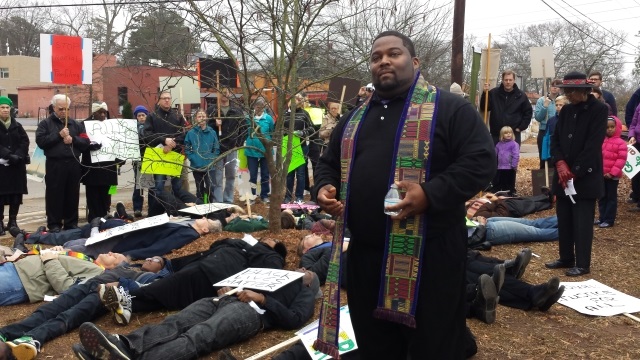 Rev. Brady Radford (Oakhurst Presbyterian) speaks to the crowd of demonstrators during the "die-in" held in Oakhurst on Sunday, Dec. 21. Photo by Dena Mellick
Share

Rev. Brady Radford (Oakhurst Presbyterian) speaks to the crowd of demonstrators during the “die-in” held in Oakhurst on Sunday, Dec. 21. Photo by Dena Mellick

But the protesters also denounced the murder of two New York City police officers killed by a black man in an apparent act of retaliation for Garner’s death.

Oakhurst Presbyterian Church organized the event and joined together with Oakhurst Baptist Church, Thankful Missionary Baptist Church, and the Atlanta Friends Meeting. The event was planned prior to Saturday’s slaying of the two New York City officers.

After marchers arrived at Harmony Park in Oakhurst, they walked around the park for 10 minutes, chanting “Black Lives Matter” and singing a song called “I Can’t Breathe,” based on the words Eric Garner spoke while being subdued by New York City Police. He died after an officer wrapped his arm around Garner’s neck. Garner was accused of selling “loose” cigarettes.

They then gathered in a circle. As they read the names of “victims of police killing,” people walked to the middle of the circle to lie down.

The list of names also included Wenjin Liu and Raphael Ramos, the two NYPD officers shot and killed Saturday, by a man who appeared to be retaliating for Eric Garner’s death. The alleged shooter, Ismaaiyl Brinsley, had an extensive arrest record in metro Atlanta.

Rev. Brady Radford, Associate Pastor at Oakhurst Presbyterian, said of the shooting in New York, “My heart breaks as I think about the Ramos family and the Liu family and losing those two officers of the law. And it’s not, in any way, what we’re espousing as we gather together.”

When the list of names was complete, the demonstrators stood or lay silently for 4.5 minutes, to represent the 4.5 hours Michael Brown’s body was on the ground after he was killed. Brown, who was a suspect in a convenience robbery, was shot to death after a struggle with a police officer in Ferguson, Mo. His death touched off a wave of protests while starting a national conversation about the treatment of black suspects by police officers.

That conversation, which has included mostly peaceful protests, escalated after Saturday’s events. Civil Rights activists like Rev. Al Sharpton quickly denounced the murders and said those actions do not reflect the values of people protesting the deaths of Garner and Brown.

Leslie Withers, a member of Oakhurst Baptist Church, helped organize the rally and was a marshal, guiding protesters along their route Sunday. She said it was important to acknowledge the fallen NYPD officers.

“It’s clear to us that our focus is on violence and brutality, and the police are not our enemies,” Withers said. “Our enemy is violence and violent response, whoever that comes from.”

The rally in Oakhurst was peaceful, and there was no noticeable police presence. Organizers said Decatur Police weren’t specifically invited to the rally, though they said they made the proper requests through the City of Decatur.

On Saturday, a protest at Lenox Road and Peachtree Street resulted in the arrests of 13 people.

Atlanta Police said in a statement that the protesters were lying in the middle of the street joined by PVC pipes and metal locks. The statement says APD will support protests done in a peaceful and lawful manner, but, “the protesters arrested were illegally obstructing a major intersection during one of the busiest times of the year and that type of illegal behavior is counterproductive and will not be allowed.”

Rev. Gibson “Nibs” Stroupe, Senior Pastor at Oakhurst Presbyterian, said his church is discussing future actions, including whether getting arrested would help the cause.

Stroupe’s church has also been engaged in talks with the City of Decatur about alleged racial profiling by the city’s police officers. The city budgeted $25,000 to address the issue after citizens raised concerns. In response, the city also began keeping track of the race of individuals stopped by Decatur police. According to data from Aug. 1 and Oct. 31, 56 percent of stops by Decatur Police involved minorities. Of the 2,149 people stopped by officers, 49 percent were African American and 8 percent were other races. According to the data, the majority of those stops – 86 percent – involved people who were not Decatur residents.

The churches involved in Sunday’s protest are inviting the community to a discussion about the next steps to take. It’s at Oakhurst Baptist Church on January 8th at 7pm.

Oakhurst Baptist’s Senior Pastor, Rev. Melanie Vaughn-West, said taking action is part of what the church views as its mission.

“For us it means silence is equal to injustice and violence and evil that we’re called to speak out against, to stand with the full family of God and stand against police violence or violence of any kind,” he said.