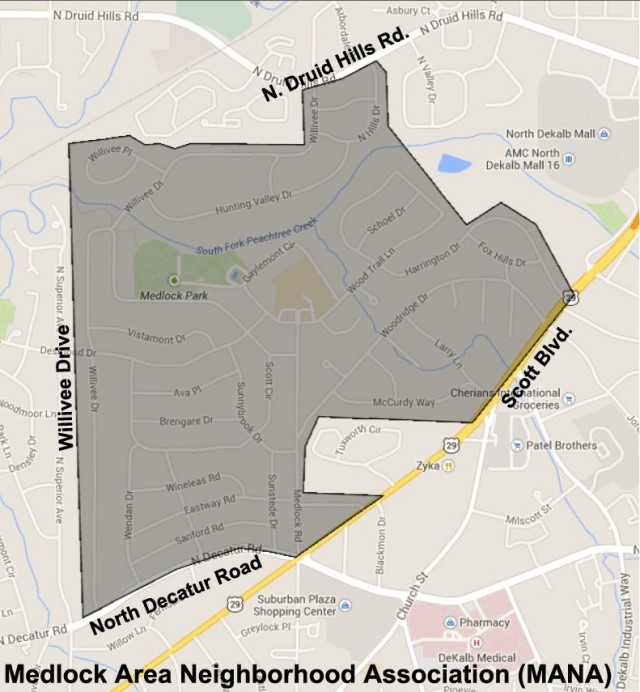 Representatives of the Medlock Area Neighborhood Association have released a detailed account of a recent meeting with Decatur officials regarding annexation.

According to the minutes posted on the MANA website, Mayor Jim Baskett, City Manager Peggy Merriss and Senator-elect Elena Parent spoke to neighborhood reps on Dec. 2.

Baskett said the city will not move forward with annexing commercial areas near Medlock if the legislature requires Decatur to take Medlock and its 1,400 homes. Currently a five-member panel appointed by the House Governmental Affairs Committee is sorting out boundary disputes between the proposed cities of LaVista Hills and Tucker. While the panel’s task isn’t directly related to annexation, it could impact the annexation plans of nearby cities. One of the panel’s members, Rep. Mary Margaret Oliver, represents Decatur.

“The mayor stated that if the legislature were to force a cram-down of Medlock into the City of Decatur, then Decatur would most likely not move forward with the annexation of commercial areas,” the minutes say.

Medlock says if Decatur takes these areas, it will make it less likely that another city would want to absorb this area.

“The mayor disagreed with our concern that their annexation of commercial property would affect our ability to get the neighborhood annexed into another city,” the minutes say.

“There will be no changes to that master plan this year,” the minutes say. “They suggested that, because they are working hand-in-hand with the school board, we talk to the school board and attempt to convince them to accept our neighborhood into the city of Decatur at some time in the future. They did admit that only the city commission, not the school board, has the legal power to annex our neighborhood into Decatur, but that the City Commission has agreed to only go forward with annexation that was supported by both elected bodies.”

MANA reached out to City Schools of Decatur, but CSD punted back to the Decatur City Commission.

A letter from Superintendent Phyllis Edwards posted on the MANA website says, “I understand that you have spoken with the city leaders. Annexation is really something that rests with the city in terms of authority.”

While there are several annexation proposals and two new city proposals being considered, Medlock isn’t in any of them. Baskett suggested Medlock attempt to join the proposed city of LaVista Hills or seek annexation into the city of Atlanta, according to the meeting minutes.

Medlock is also home to the International Community School, which is part of DeKalb County Schools. While supporters of annexing portions of the Druid Hills Charter cluster into Atlanta say the public school system there will assume ownership of ICS, Decatur disagrees with this interpretation of the law.

“The City Manager believes the school belongs solely to DeKalb County and would not be available to the City of Decatur,” the meeting minutes say.

Correction: An earlier version of this article misidentified the state representative whose district includes Medlock Park. The representative for Medlock is state Rep. Rahn Mayo, D-Decatur.