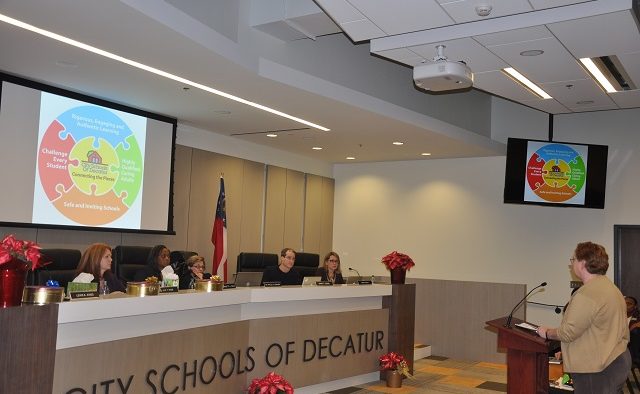 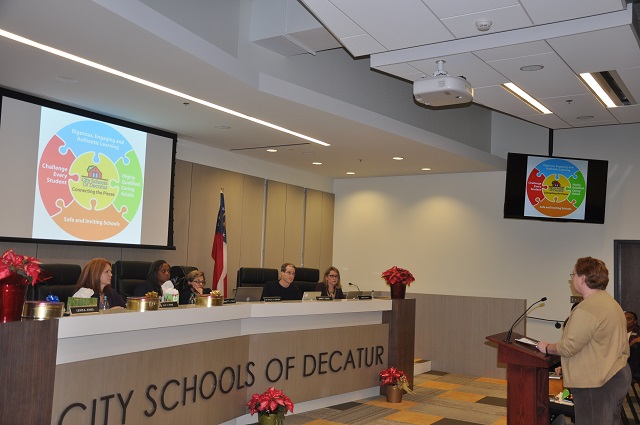 City Schools of Decatur Board of Education members want more time before they’ll give their endorsement to the city’s annexation plans.

School Board members on Tuesday, Dec. 9, were set to consider crafting a resolution that would support the city’s updated plan, which was released on Dec. 8. It was expected that the School Board would vote on the proposal on Dec. 9, but board members thought they’d have more time to digest it. The plan was supposed to be released Dec. 1. The city delayed the release of the plan because City Manager Peggy Merriss had a death in her family, resulting in a lengthy absence from work during the month of November.

“I think the general consensus is we recognize and support annexation done well,” Board member Garrett Goebel said. “I think there’s a general consensus … is the long-term benefits are there. The primary concerns I’m hearing are the short term hurdles in getting there.”

Board member Lewis Jones said he wants more information about how CSD will deal with annexation on day one, assuming voters approve it in a referendum. Will CSD have enough room? Will it require altering CSD attendance zones?

“My request is a joint resolution,” Jones said. “Here are the reasons we need to annex here’s how we’re going to accomplish it in the short and long term.”

The BOE deferred a vote until the next regularly scheduled meeting or a special called meeting, whichever comes first.

Board Chairperson Bernadette Seals said she spoke to Mayor Jim Baskett about the matter. She said the board will try to come up with a resolution it can consider by Dec. 18.

“I spoke with the mayor earlier today and basically discussed the fact that we still have many questions about the annexation,” Seals said. “We received their master plan yesterday and have not had a full time to be able to review that information.”

The Decatur City Commission was supposed to vote on its annexation plan on Monday, Dec. 15, but it now appears unlikely that will happen unless the differences can be resolved soon. As part of the resolution, the BOE chair, vice chair and Superintendent Phyllis Edwards will meet with Decatur’s mayor, mayor pro tem and City Manager Merriss before Dec. 18.

The Decatur schools system’s current enrollment is 4,336 students. A consultant’s report on enrollment estimates that the city’s school system will grow to 7,398 students by 2020 without annexation in a high-growth scenario. If the city is able to annex 1.6 square miles in its current plan, it would increase that number by 747 students.

There are financial implications for the school system if it can’t annex more property. According to a consultant’s report, property taxes will likely increase if CSD can’t find more room for its students.

Decatur and Avondale are moving to get ahead of proposals for several new DeKalb County cities. The two most high-profile of the proposed cities are LaVista Hills and Tucker. A five-member panel appointed by the House Governmental Affairs Committee is supposed to be settling their boundary disputes by Dec. 31. But there are other cities in the mix, too. A proposed City of South DeKalb would also likely compete with Avondale Estates. And there’s also a proposal for a city of Stonecrest surrounded by a City of South DeKalb.

Merriss said the city will be in a better position if the city and school system present a united front on annexation, the sooner the better. Decatur’s annexation proposal doesn’t have a sponsor in the General Assembly at the moment.

“If we’re not ready by even a little bit before the General Assembly comes into session we will be in a more defensive position,” Merriss said. “So it’s not so much that a delay will hurt the city’s plan. It will hurt our plan. The longer the time between when the General Assembly starts and when we can provide a unified front, our position gets weaker and more difficult to move forward.”