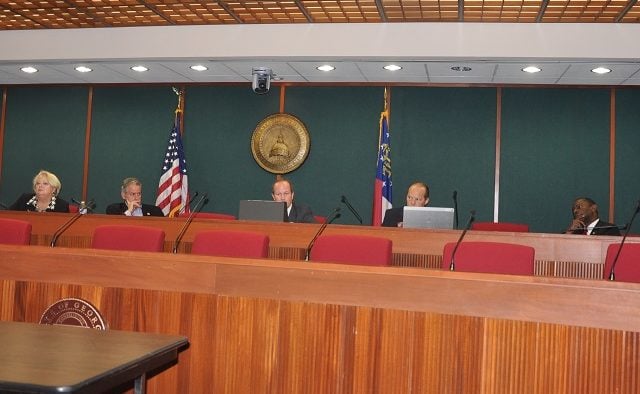 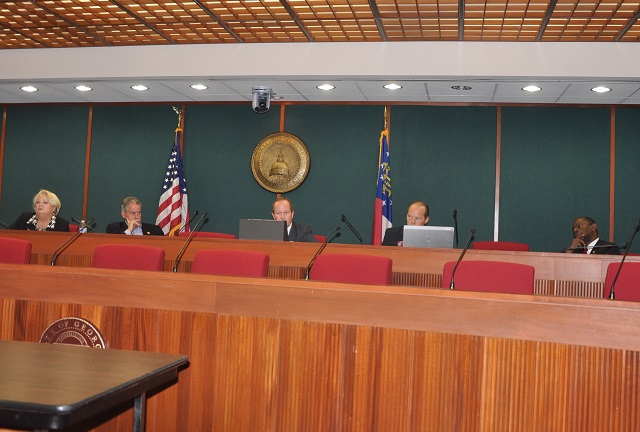 Members of the House DeKalb County Cityhood Subcommittee of Governmental Affairs made it clear that they weren’t wild about the idea of being there.

“I’m not happy to be here,” Rep. Mark Hamilton, R-Cumming, said later in the hearing.

All but two of the committee members, Rep. Mary Margaret Oliver, D-Decatur, and Rep. Howard Mosby, D-Atlanta, hail from DeKalb County. The other three legislators are taking time away from the concerns of their districts to address the morass created by a proposals to create two new cities: Tucker and LaVista Hills.

LaVista Hills, formerly the Briarcliff and Lakeside Cityhood movements, and Tucker were supposed to agree upon a map by Nov. 15. When that didn’t happen, House Governmental Affairs committee Chairperson Rep. Amy Carter, R-Valdosta, appointed the five-person subcommittee to settle the matter.

During the meeting, Brockway clarified what happens if the committee doesn’t make a decision.

“If the five of us fail to draw a map, the five of us are done as far as this process goes,” Brockway said. “Nothing at any point stops the two groups from coming together and saying, ‘We’ve had a breakthrough and we can agree on this.'”

Briarcliff and Lakeside consolidated their proposal, but couldn’t resolve their differences with Tucker.

Rep. Scott Holcomb, D-Atlanta, lives in the proposed city of LaVista hills. He isn’t on the committee but spoke as a neutral voice on the matter.

Holcomb explained that Tucker’s cityhood movement is rooted in history and its sense of being a distinct community, while LaVista’s is driven more by a sense that residents could create better government than they currently have with DeKalb County.

Both overlap in a key commercial area: Northlake Mall. There was a claim at the meeting by a LaVista Hills supporter that the Northlake Mall owners had agreed to a division of property that would make both cities viable.

That’s the wild card in this complex situation. Typically, a new city is a two year process that involves a financial feasibility study.The House Governmental Affairs Committee is waiving this rule and not requiring each new city to obtain a new study even though the maps have changed and continue to change.

Lakeside, Briarcliff and Tucker were economically feasible, but because their maps overlap, there’s a concern about whether both would be if only one of them has this area in its map. To complicate matters, Brookhaven and the Together in Atlanta annexation movement are eyeing some other property that’s in the LaVista Hills Map: Executive Park and Children’s Healthcare of Atlanta. Take those out of the equation and carve out some of the Northlake Mall property, and what is LaVista Hills working with?

Allan Venet, co-chair of LaVista Hills YES, said there would still be a desire to form a city without these properties in the map.

“Whether we could go forward is a different question,” he added.

Holcomb told the panel he is concerned about letting a cityhood bill move forward without being certain whether it is economically viable.

“I have a lot of concerns. No new malls have been built in the United States since 2006,” he says, referring to Northlake Mall. “I have a little bit of personal concern about whether that’s smart to make it the economic engine of it.”

He also recommended that the panel stop any annexation plans, like Brookhaven’s, from moving forward if the cities do come to an agreement on a map. How the Legislature might do that isn’t clear. Brookhaven is considering annexing Executive Park and CHOA by petition, which could occur well before the 2015 session of the General Assembly starts. Brookhaven on Tuesday, Dec. 2, again deferred approving the Executive Park, CHOA annexation, citing the need for more time to come up with service agreements.

Some members of the panel sounded a little more skeptical of Tucker’s presentation, which focused mostly on the history of the community and less on the numbers. Panel members questioned whether Tucker should also include police services in its cityhood proposal, like LaVista Hills’ proposal. Currently, the Tucker intends to keep the DeKalb County police services but left the door open for the city to take over this function in the future.

Oliver, Decatur’s representative, said that zoning and land use is an important part of why communities want to form their own cities.

“I think land-use control is very much at the heart of what citizens want. That’s very important more so than you might realize from Harlem, GA,” she said, looking at Rep. Barry Fleming, R-Harlem.

The hearing was supposed to end at 2:30, but the presentations didn’t wrap until 2:40 pm. Brockway asked for public comments. More than 40 people had signed up to speak. Reporter Newspapers says the meeting lasted three hours.

The committee has until Dec. 31 to finish its work. The map must be approved by a majority vote of the panel.