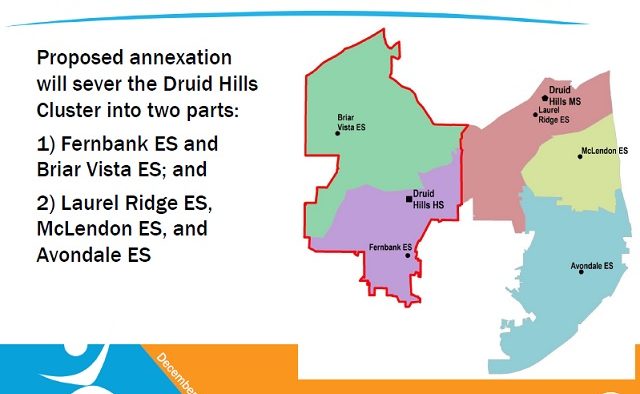 A slide from a DeKalb County Schools presentation about the potential impacts of annexation on the county''s schools.
Share 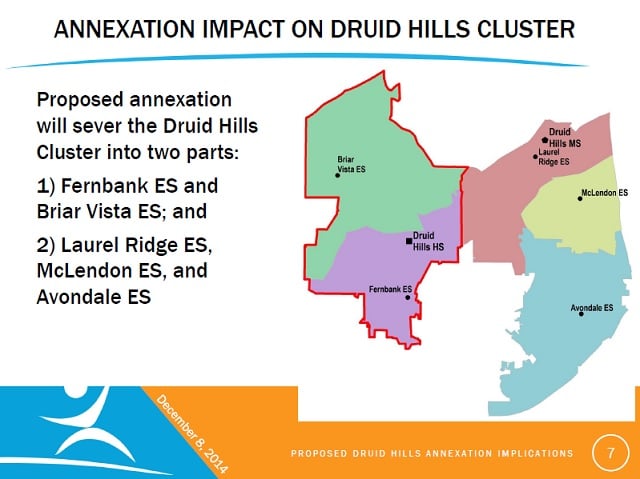 A slide from a DeKalb County Schools presentation about the potential impacts of annexation on the county”s schools.

One of the questions raised by a proposal to annex three DeKalb County Schools into the city of Atlanta is what it would do to the students at the other schools that feed into it.

When the three schools move into Atlanta, they will also become part of the city’s public school system. The other four schools will stay in DeKalb County. What happens to students of the other four schools? Will they be allowed to attend school at Druid Hills High with the rest of the cluster? If not, what high school will they go to?

Among the highlights of the DeKalb County Schools report:

– It says, “The proposed Druid Hills annexation plan would result in the disenfranchisement and displacement of 2,922 students and district-wide loss of instructional opportunities, athletic programs, instructional staff, and funding potential.”

– The report says 1,626 students across 37 schools will no longer have access to “school choice options,” options that include attending Druid Hills High.

– DeKalb County would lose the ability to sell some of its property. The report says, “Together In Atlanta (TIA) claims that annexation would give APS the power to take title to the old Briarcliff HS which would result in the loss of a DCSD long-term fixed asset with received offers in excess of $50 million.”

– The report says seniors in Druid Hills will pay more in taxes because they won’t get a DeKalb County homestead exemption. It says water bills will be higher for everyone. Taxpayers would still pay for DeKalb’s bond debt while accepting new debt incurred by the city of Atlanta.

The report is relatively short and worth a read …