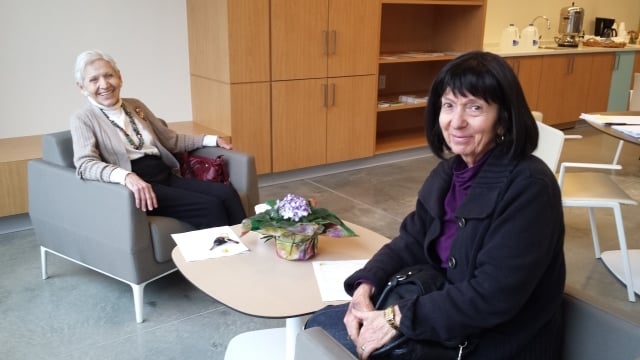 The Central DeKalb Senior Center held a soft opening on Monday, Dec. 22, welcoming seniors interested in its services and offering Decaturish a preview of the new facility.

The senior center is part of an ongoing national and local push to provide more services for the rapidly growing population of older adults. Construction of the center’s 15,000 square-foot building is completed. The county is still working to fill the brand new rooms with workout equipment, a pottery kiln, and arts and crafts supplies.

The Atlanta Regional Commission’s report, The Graying of Atlanta, says the Baby Boom generation, born between 1946 and 1964, makes up the fastest-growing segment in a 20-county region. The 65 and older adults demographic had the second largest increase since the previous census. It is expected to “grow dramatically over the next two decades as Baby Boomers age in place,” the report found.

The neighborhood of Toco Hills has gradually aged in place, becoming what’s known as a Naturally Occurring Retirement Community (NORC). Governments and non-profits have recognized the value of providing resources for older adults continuing to live in their own homes and neighborhoods.

“Central DeKalb is one of the earliest areas of the county to be developed into a residential area, and many of those families came and stayed their entire lives,” DeKalb County Commissioner Jeff Rader said.

In a 2008 letter to his constituents, Rader explained that the proposed federally-funded senior center would be an essential element of “a self-sustaining neighborhood where its citizens enjoy all stages of life in one community.”

The bright, 80-seat dining room at the center overlooks the Mason Mill Park playground. It will be open for lunch during the week and available for community gatherings in the evenings. Technology-enhanced classrooms have desks and chairs lined up, ready for classes and lectures. 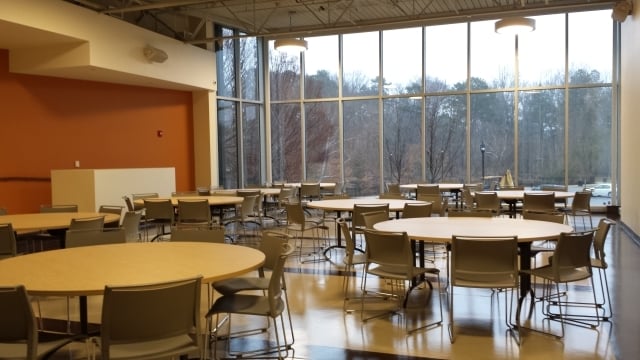 Lunch will be served during the week in the 80-seat dining room. It can also be used as a community gathering spot. Photo by Dena Mellick.

“It’s a great way to be able to expand our services to our residents,” said Terry Earl, Community Resource Director at Clairmont Crest, a nearby senior living facility. She dropped by the new senior center on Dec. 22 to take a tour.

Earl said residents at Clairmont Crest want to be involved in everything from card games to political advocacy. The center will help them find people with similar interests.

The grand opening for the $5.16 million Central DeKalb Senior Center is expected at the end of January, but seniors are already trickling in to take tours of the new facility. They’re also being asked to fill out surveys about the types of classes they’d like to take.

“What we’re interested in finding out is, ‘what do you want to do when you come here?’ And we’re going to try our very best to meet a lot of the interests that the seniors have voiced,” Kingsland said.

She said classes already in the works include physical activities like line dancing, ballroom dancing, yoga, and tai chi. There will be art classes such as pottery, watercolor and acrylic painting. And there will be technology classes, language classes, travel groups, and book discussions, as well as self-led groups focused on quilting and card games.

Carole Feinberg, 74, lives in Toco Hills and dropped by to fill out an interest form on Dec. 22.

“I want to interact with people my own age, because we have a lot in common, similar backgrounds,” she said. “Classes are geared toward seniors. I love doing senior exercise – I really can’t keep up with the 30 year olds.”

Feinberg said that when her husband of 46 years passed away, she decided to research programs for seniors.

“I instinctively knew I had to reach out and that’s when I did join classes for seniors, and one thing led to another, and that’s how I became involved in the senior community in this area,” Feinberg said. “It was a lifesaver.”

Rader said the next step is to make sure the senior center meets the changing needs of the older adults by creating an operating plan. The plan will look at what services to offer and identify other potential partners for the center. He said he’ll be at a community meeting at the new center on Jan. 13, 2015 from 2-4 pm to discuss what the plan should include.

Kingsland said the center already works closely with DeKalb County Parks and Recreation, the library system, the Mack Love Center, and other senior living facilities in the area.

She said strong partnerships are an important goal for the new center to ensure seniors in the area are receiving what they need.

Both Kingsland and Earl say the senior center will not just be a place for older adults to receive services – they’ll also be contributing.

“Seniors are coming here to learn, but they’re also coming here to teach. It’s that ongoing quest of knowledge and opportunity to give back,” Kingsland said.

Editor’s Note: This story has been updated to include the time span during which the Baby Boomer generation was born.