Group campaigns for a better DeKalb

Group campaigns for a better DeKalb 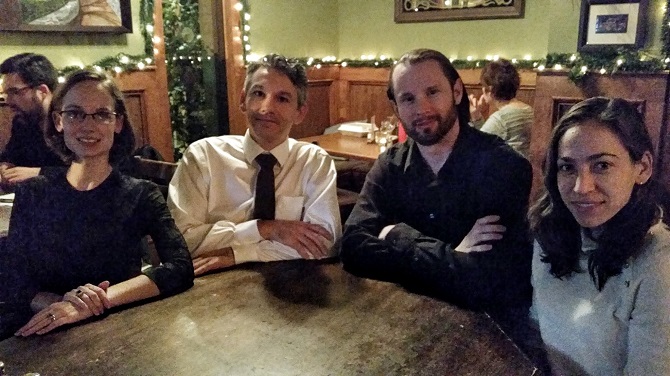 Clare Steen (far left), Russell Steen, Will Frishe and Lisa Ulevich pose for a photo after a recent group meeting at the Corner Pub. Photo by Jill Nolin
Share

Clare Steen (far left), Russell Steen, Will Frishe and Lisa Ulevich pose for a photo after a recent group meeting at the Corner Pub. Photo by Jill Nolin

Russell Steen gaveled the meeting to order with a double tap of a beer glass.

The core members of the newly created Campaign for DeKalb gathered around a table at the Corner Pub in Decatur to talk business while a booming voice rattled off trivia questions about Civil War debts and Super Bowl victors.

Frustrated by low voter turnouts and seemingly few candidate choices in a county mired in controversy and scandal, the group is working with a fervor to spread its message throughout DeKalb: We can do better.

But if one of them has made it to your door in the last two months, you might know them better as the people who are trying to entice you to a public meeting.

“We’re not choosing a side,” said Steen, a web developer who lives in Decatur. “We’re not picking a fight. We’re saying, ‘Here’s a meeting. We think you might care about it. Tell us what you think.”

It’s a nonpartisan group comprised of people from different backgrounds and political preferences, but it’s all about local issues here.

The only cause they’re interested in championing is government transparency and an active, informed community. They are proponents of properly announced city council meetings, clearly posted agendas and readily available public information.

“My goal, and I think our goal, is to make involvement in your governance not such a ripping pain in the arse,” Steen said.

As soon as they hear about a public meeting, they are out door-to-door trying to ensure residents are aware. Not surprisingly, every now and then there’s a skeptical face on the other side of that door.

A Forrest Hills resident at a recent Avondale Estates City Commission meeting said during the public comments portion that someone had visited homes in her neighborhood to warn of an Avondale power grab.

Clare Steen, a Decatur native who is married to Russell, was at the meeting and scurried over to the resident afterwards to clear up the confusion. The group was only trying to spread the word about the upcoming annexation meeting, she told the resident.

“Nobody here is vying for power,” said Will Frishe, an IT consultant who lives in Stone Mountain. “We want things to work the right way. We hope by getting more people involved, we’ll get the right people involved and they’ll be the ones who hold the reins and not screw things up.

“‘This is your community and this is what’s going on. Care about it.’ – It’s an easy message. It’s a simple thing that used to happen (when I was a child). I don’t have to agree with you on things, but care,” Frishe added.

Campaign for DeKalb, which has submitted its paperwork for nonprofit status in Georgia, started shortly after the November election and has found an eager audience throughout the ongoing annexation and cityhood twists and turns.

Like another newly formed group, Blueprint DeKalb, Campaign for DeKalb also hopes to affect change in the embattled county. But the two organizations, which are not affiliated, have different methods for achieving that goal.

“Campaign for DeKalb is focused on citizen involvement within DeKalb. (Blueprint is focused) on pushing legislation to fix DeKalb from the State House,” Clare Steen said. “We appreciate their effort to improve DeKalb. Their effort is a good complement to, but not a substitute for, community involvement.”

Clare Steen said, with the exception of items like ethics reform, much of what Blueprint is trying to accomplish could be done without state legislative action.

“In many ways, the Blueprint plan says, ‘We know we will elect corrupt officials,’ and appeals to the State House to save us from ourselves,” Clare Steen said.

Attempts to reach a representative of Blueprint DeKalb were unsuccessful. The Atlanta Journal Constitution reports that members of the General Assembly will likely consider legislation enacting reforms proposed by Blueprint and the county’s Government Operations Task Force.

For Campaign for DeKalb members, success is more residents at public meetings, more candidates on ballots, increased voter turnout on Election Day, more people who know their elected representatives, and governments providing adequate time for the public to comment on proposals before a vote.

The group does not currently donate to any issues or candidates and there are no plans to do so. Clare Steen didn’t want to dismiss the possibility that the group might identify a cause in the future that it might decide to support financially. She declined to disclose how much the group has raised so far.

For now, the small but dedicated group is simply focused on building up an email list so they can more easily notify people of a meeting or issue that might affect them. And if nothing else, members say they want residents to know they won’t be alone if they do attend.