Intersections – Eve and After

Intersections – Eve and After 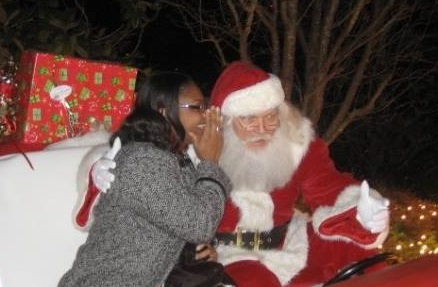 My oldest sister would choose the firewood. She knew how to find the driest pieces. My other sister sorted through the newspaper and removed the shiny flyers and advertisements. We would stack wood interspersed with paper. We would light the fire and fan the flames. Eventually, we felt heat push back at us. When we turned to each other, we could see firelight reflected in each other’s eyes.

I would toss in pine straw and watch it glow without blazing. It would burn red for a moment, then curl into nothing.

Our parents would be in the kitchen. My dad chopped onions and green peppers. My mom seasoned the stuffing and added secret ingredients like mushrooms and celery. I can still hear the sound of her hand patting the turkey with the affection of a woman bathing her child. There was ham and a roast and curry chicken. Broccoli casserole. Rice and peas. No one dish was the centerpiece.

My sisters would tidy the house and bathrooms even if no one was coming. The house had to be perfectly clean. Sometimes I would be assigned to polish the silver. It was a soothing task that helped distract me from the excitement and happiness bursting inside me.

Our house was filled with Christmas music. My husband was surprised last week when I sang every word to Tennessee Christmas. All I could think is, “Doesn’t everyone know the words to that song?” No Christmas song was off limits. Gospel, Country, George Michael and Wham! If someone made a Christmas album we knew it. We knew the church versions and the pop versions. We would sing as we cooked and cleaned and wrapped. We each had a favorite song. My parents sang beautifully, but my sisters and I sang off key. It didn’t matter at Christmas.

So we spent our Christmas Eve. Better than Christmas. Together. Waiting.

I never had many gifts to wrap. I had no allowance. As I grew older, my mother would indulge me with the money to buy my sisters fuzzy slippers and robes. My mother would get perfume or bath salts even though we never saw her taking baths. We’d buy my father horrible ties that he’d wear once. After he died, we laughed about the skinny yellow Miami Vice tie he got one year. When I think of my dad it is almost always about Christmas. When people say, “It’s the thought that counts” you think they mean gifts, but I think it means making memories.

We’d never rushed to open our presents. We liked to take our time. When Christmas fell on Sundays, we went to church first before opening any gifts. We were three girls who tried to make Christmas day last as long as possible. We’d eat breakfast first. Maybe peek in our stockings. Our friends would have opened everything before dawn. We moved slowly. We tried to make Christmas morning last forever.

Last year we barely made it through Christmas. It felt like we were clinging on the side of a cliff waiting to fall. I didn’t want Christmas or carols or the warmth of firelight. This year, I’m ready.

Christmas Eve is my favorite day of the year. We will wrap gifts that are noisy and require batteries and have small parts. I’ll be making a cherry pie. My husband made tamales. I don’t have any silver to polish. I don’t have to go to bed before midnight, but I might take a peek at the sky before I close my eyes. And listen quietly. Just in case.