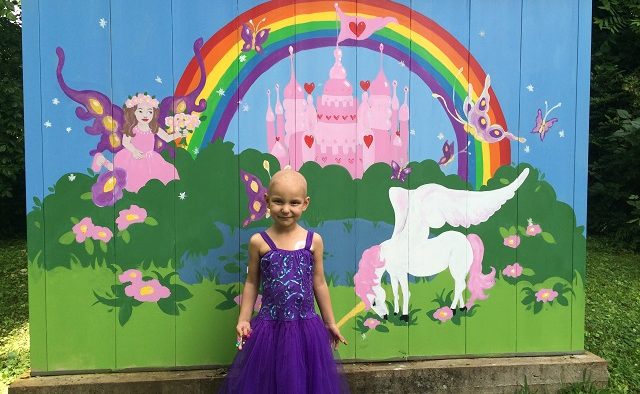 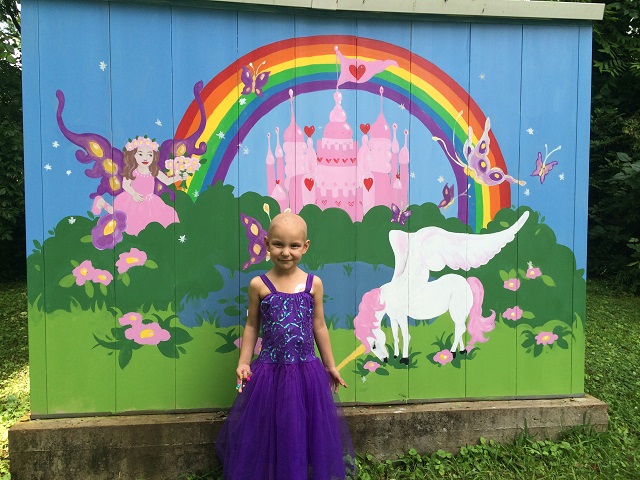 In February of this year, doctors discovered a highly-malignant tumor in the brain of Kucelin’s five-year-old daughter, Bianka.

“It was a rare, aggressive cancer,” Kucelin told Decaturish. “It was SPNET and it’s very high risk.

Bianka’s had a kind of SPNET, or supratentorial primitive neuroectodermal tumour, which are mostly found in children. They are also called cerebral neuroblastomas.

Not much is known the specific type of tumor she had, because only about 30 kids a year develop them.

“A situation like this will really show you who your true friends are and who really cares,” Kucelin said. “We uncovered in Kirkwood these people who are jewels.”

Bianka’s illness came on suddenly. Only two weeks passed between her first headache and her diagnosis.

“Bianka’s first emergency room visit was Jan. 26,” her mother said.  “[Bianka] had a mild seizure.  Honestly, we didn’t even know it was a seizure at first.  She threw up, her eyes were rolling back in her head, she couldn’t walk, she was pale and cold to the touch. So we went to the ER in the middle of the night and they said it was due to a virus.”

But when the headaches didn’t go away, an MRI revealed the mass in Bianka’s head.  A Feb. 14 surgery removed the mass, but left her facing several intensive rounds of chemotherapy.  It was during this time that Kirkwood stepped up to help the Kucelins.

“The community support started right from the beginning,” Kucelin said.  “There was one friend – I met her through mutual friends … She posted something on our Kirkwood neighborhood Facebook page about Bianka. This was in February, after surgery but before chemo started. Right away, people started donating money.”

Kucelin says one neighbor paid for a second opinion regarding Bianka’s diagnosis. Another secured medicine from abroad. A member of her local running group created and sold t-shirts, then donated the proceeds to Bianka’s medical fund. Many neighbors brought the family groceries. Kucelin’s list went on and on.

“One family told other members of their extended family about our situation and they sent us cash even though I don’t know any of them,” Kucelin said.

But Kucelin says the community has given much more than money. The owner of La Petite Marche made her therapy dog, Happy, available for Bianka whenever the little girl wanted. A neighbor watched Kucelin’s other children during hospital stays. Another found an artist to paint a beautiful playhouse – a “happy place” — for Bianka.

People began keeping track of Bianka’s progress on Facebook and on Kucelin’s blog.  They contacted Kucelin to offer messages of support and developed the habit of checking on her regularly. “People called me up or texted to say “what do you need?’ People I run with came to the hospitals to visit or sit with me.”

Anke Larkworthy’s posts kept the community in the loop about Bianka’s situation. Larkworthy says her daughter and her own family experience with cancer motivated her.

“My daughter is only one month older than Bianka and we live very close to each other,” she said. “Kucelin and I had just connected again in the neighborhood and wanted to make plans for our girls to play together. Then Bianka got her diagnosis. I was just so shocked, that this sweet, beautiful girl would have to deal with this. I looked at my daughter and it just hit very close to home. I just wanted to help as much as I could.”

Larkworthy was humble about the organizing she did for the Kucelins.

“I knew we have a great community here,” she said. “It just takes someone to reach out and so I did. I reached out to people who had similar experiences and helped Kucelin connect with them.  I really didn’t do much, from my perspective, but the community responded.”

Larkworthy said she knew she had to help Kucelin be strong for Bianka. “I asked myself ‘what could I take off her shoulders?’ I kept checking in with Kucelin, because I thought it was important to show continued support, so she does not feel awkward to ask for help.”

These days, Bianka is doing well.  She’s finished with chemo and has been going back to school once a week.  If she continues to improve, she’ll start attending classes two or three days a week in January.

Bianka has had few of the usual side-effects of chemo.

“She’s had no loss of organ-function, no vision- or hearing-loss, no loss of brain function,” Kucelin said. “The only possible problem she may still face is infertility – but we won’t know until later.

Bianka has to have MRIs every three months and so far, they’ve come back clean.  Because the tumor was very aggressive, doctors say they will have to monitor her closely.  Her oncologists say there is about a 60 percent chance she will remain cancer free.

“When something like this happens, your world is never the same anymore,” Kucelin said.  “You just have to deal with it. But this has shown me who my true friends are and who is worth my time. It’s showed me what a great community Kirkwood is and how great the people are – so down-to-earth and supportive. It’s what community is supposed to be. It’s been eye-opening on lots of levels.

“You can’t get through this experience alone. You just cannot. What really matters is when shit hits the fan, who shows up for you? These people showed up and had compassion. I value them. I can’t thank them enough. I would give my life to these people.”

Correction: An earlier version of this story misspelled a name. The story has been updated to reflect the correct information.