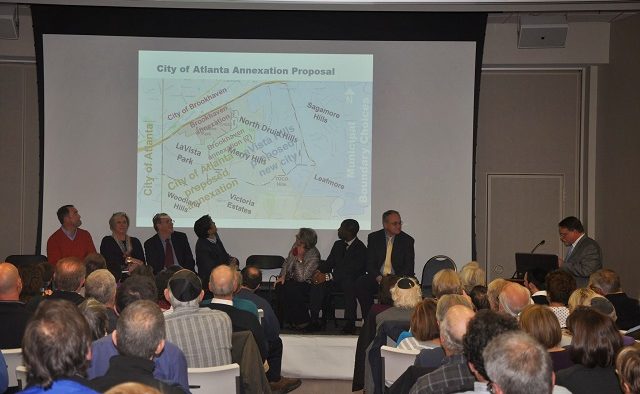 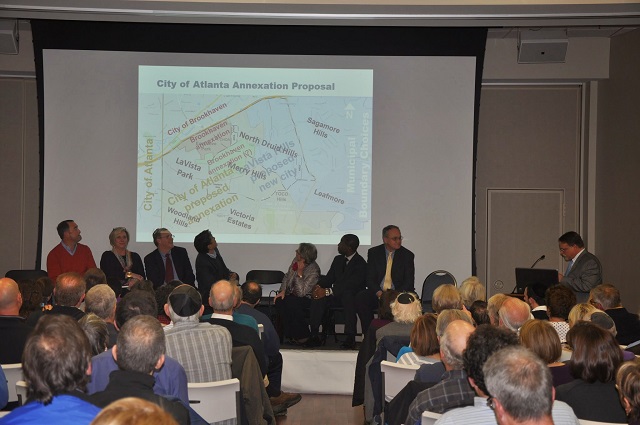 Brookhaven’s City Council on Monday, Dec. 8, annexed commercial property that the proposed city of LaVista Hills had in its map.

LaVista Hills’ biggest champions – Mary Kay Woodworth and Allen Venet – weren’t at Brookhaven’s City Council meeting, however. They were at Young Israel on Lavista Road speaking during a town hall meeting on cityhood and annexation.

Brookhaven unanimously approved the annexation of Children’s Healthcare of Atlanta and Executive Park, according to the Brookhaven Reporter.

A crowd that met the textbook description of “standing room only” was in the room with Venet and Woodworth at Young Israel. The LaVista Park, Merry Hills, North Druid Hills, & North Amanda civic associations a called the town hall meeting. These neighborhoods are overlapped by the LaVista Hills map and annexation maps by a group called Together in Atlanta, which is advocating for annexing part of the Druid Hills High cluster into the city of Atlanta.

Brookhaven City Councilman Joe Gebbia had previously confirmed he would attend the Dec. 8 town hall at Young Israel, according to an announcement about the event. No one from Brookhaven city government attended. Toward the end of the town hall, someone in the audience announced that Brookhaven was holding a special called meeting at that very moment for the final vote on annexing CHOA and Executive Park.

Venet and Woodworth had previously asked Brookhaven not to annex these properties. Decaturish followed-up with them after the town hall and asked if they knew about the Brookhaven City Council vote.

“Yes, but were previously committed to community meeting at (Young) Israel,” Woodworth said. “We have factored that annexation into our calculations regarding borders with Tucker and other areas and feel that our proposal will continue to be feasible.  We will need to update our study in near future.”

“In fact we look at this effort by commercial property owners to opt for city zoning and permitting as an endorsement of the need for cityhood to promote smart growth for the entire county,” Venet said. “The entire situation remains very fluid, but we continue to believe that our proposal will be fiscally viable.”

The Brookhaven City Council’s move puts even more pressure on a five-member panel appointed by the House Governmental Affairs Committee to sort out the boundary disputes between LaVista and its proposed rival city, Tucker. Both of their maps overlap in the Northlake Mall area.

State Rep. Mary Margaret Oliver, D-Decatur, spoke at the town hall meeting. Oliver, who is on the panel, said the panel’s charge has nothing to do with negotiating competing annexation proposals, like Brookhaven’s or the ones being presented by other cities like Avondale Estates and Decatur. Oliver is hopeful the two sides can agree without the panel’s help.

“I hear a lot of good faith efforts moving forward on negotiations between he proposed cities and proposed annexations,” Oliver said. “Before we jump into the business of arbitrating those disputes, we’re giving it more time.”

The panel has until Dec. 31 to reach a decision.

Many of the people in the room at Young Israel were in favor of suspending the process to give everyone involved more time. The loudest rounds of applause came when the moderator, Dan Wright, conducted an informal poll asking residents if they wanted to delay the process. Many in the room began filing out before the meeting had concluded. By the time representatives of LaVista Hills, Together in Atlanta and DeKalb County finished talking, there were only about 20 minutes left for questions.

“Well, they don’t give a lot of information on it and I don’t think anything is being thought through fully,” said Chris Johnson, who lives in North Druid Hills. “There are a lot of issues with public services and things they say are going to be cheaper. But I’d like to see a little more information on it. I think they should wait.”

“I’m still leaning toward the city of LaVista,” Elkon said. “Maybe waiting and learning more is the way to go, but my son lives in Brookhaven, was there before the city and then after the city, and says you just cannot believe the difference that they’ve experienced in police presence, in services. So it sounds like a city would probably be a good option.”