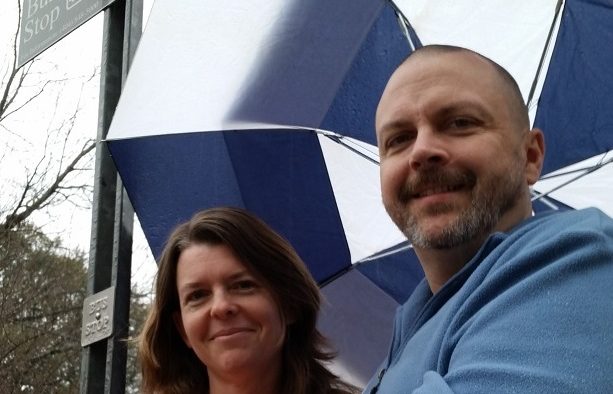 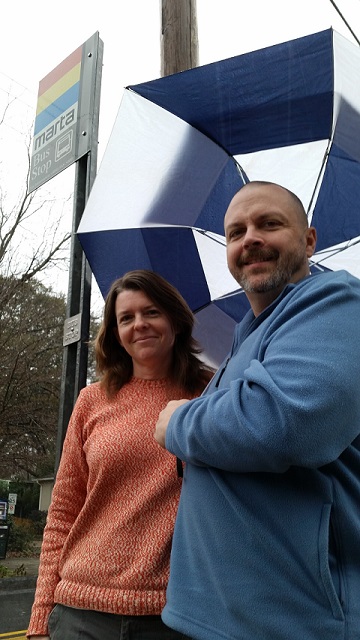 Corey Anderson (left) and Bryan Thrasher pose for a photo at the MARTA bus stop in front of their Candler Park home. They both take the bus to work. Photo by Jill Nolin

Corey Anderson knows that hopping in the car and driving from her Candler Park home to her Emory University job would be the fastest commute, but she’s long since given that up.

It may have taken a free MARTA pass and rising parking fees at Emory to lead Anderson to that realization seven years ago, but she has since come to appreciate the other benefits of leaving the car parked in the driveway. On some days, she even rides her bike to work.

“So I spend 30 minutes taking the bus instead of 20 minutes driving my car, but it’s 30 minutes that I can spend reading or playing Scrabble on my phone or looking at work email or even just staring out the window having some moment of quiet reflection that I otherwise would not have.”

The bus has been Anderson’s go-to. In January, the assistant program director with the department of pathology and laboratory medicine began alternating the bus with the bike. When in a pinch, she turns to a car-share program as a safety net.

“We really find it’s the options – the opportunity for a choice – that reinforce those individual actions,” said Byron Rushing, senior transportation planner for bicycle and pedestrian planning with Atlanta Regional Commission. “(For example), someone can feel comfortable biking because they know they can take MARTA back if it’s raining.”

The latest U.S. Census American Community Survey on commuting trends showed an uptick in walking trips to work in Atlanta, from 3.5 percent in 2000 to 4.7 percent more recently. It also showed an increase in people riding their bike to work, 0.3 percent to 0.8 percent.

“We are absolutely seeing it grow, although we are seeing it grow from a low base, but the growth rate is certainly there,” Rushing said.

The redevelopment of in-town neighborhoods and infrastructure improvements like the Beltline are key drivers behind that growth, Rushing said.

The Beltline, which is a planned 22-mile loop with links to public transit, parks and dozens of neighborhoods, will continue to affect transportation patterns throughout the Atlanta area, including Decatur.

The addition of express lanes on major corridors should also help. But, for those living in the Decatur area where bus stops are plentiful and many roads are bike accessible, it may not take a massive economic development to upgrade a commute.

“People talk about adding MARTA rail or building new roads or widening roads,” said Jenny Schultz, a communications specialist with Georgia Commute Options. “Those are long-term projects. They don’t happen immediately. We offer an immediate solution where they can start carpooling tomorrow and it can make a difference on their wallet, work-life balance and happiness.”

Right now, most of Atlanta commuters are not using those alternatives. As of 2010, 82 percent of metro Atlanta commuters were driving alone to and from work, according to a 2010 Center for Transportation and the Environment survey that Schultz cited. She said she expects – and hopes – to see that number decrease when the next survey is conducted.

Georgia Commute Options is a program within the Georgia Department of Transportation. The program works with employers in 22 counties that do not meet air quality standards and helps individuals who live or work in those counties find alternatives to driving alone to work each day.

And the Decatur area is not short on those options, said Emily Estes, an account manager with Georgia Commute Options.

“It’s really easy to access the transit there and for biking and walking, so I always kind of feel like it’s silly when people tell me they live or work there and they don’t try those options,” Estes said.

Estes finds that many people are not even aware of their choices. Carpooling, she said, seems to be the easiest first step for people. Georgia Commute Options has a database with tens of thousands of commuters that helps identify potential carpooling matches.

Carl Holt, who works for a software company at the Perimeter Center, and his wife moved to Kirkwood a couple years ago because of the access to public transit. Holt rides his bike to the Edgewood/Candler Park MARTA station. When it’s raining, he rides to the nearest bus stop and then takes the bus to the station. Once he reaches the Sandy Springs station, which requires a transfer at Five Points station, he bikes a couple miles to his office. All told, it takes him about 45 minutes.

“Don’t be afraid to mix up your commute,” Holt said.

Anderson and her husband, Bryan Thrasher, said they also sought out a neighborhood with connections to public transit. Taking the bus has helped them better handle the in-town cost of living, as well. But it took effort. Finding the right route requires preparation and paying close attention to weather forecasts. Anderson regularly consults four different apps on her phone when planning her route. It also took a fair amount of trial and error to figure out what worked best.

For example, it took Anderson a few hairy experiences biking on different Atlanta streets before she settled on Oakdale Road as her preferred route.

Thrasher, a website development consultant at Georgia Pacific, started taking the bus to work about a year ago when he noticed one day that the bus that drives by their home is the same one he had noticed passing his office. So he decided to just give it a try for a month. Although there are frustrations, like buses that sometimes don’t show or aren’t on time and routes that change, he said he finds it far more enjoyable than driving to work.

“I think that’s a big part of the bus problem – or the perceived problem, rather – you’re not 100 percent confident in where the bus is and why it isn’t here. Did I miss it? And that causes a lot of anxiety, which I think puts a lot of people off. If you can pay for a car, then you’re willing to pay to not have the anxiety,” Thrasher said.

“What cars give you is infinite choice, and that’s what makes everybody comfortable – you’re in control, so to speak, of it. With any other form of transportation, you start giving up some aspect of control. But there are other ways to get it back without using up more resources.”

For Anderson and Thrasher, that means always having a fallback plan. The couple says they are content knowing that, even when everything else goes wrong, they can always hoof it back home.

Correction: An earlier version of this story misidentified a MARTA station. The story has been updated with the correct information.