One! Two! Three! What’s up with that tree?

One! Two! Three! What’s up with that tree? 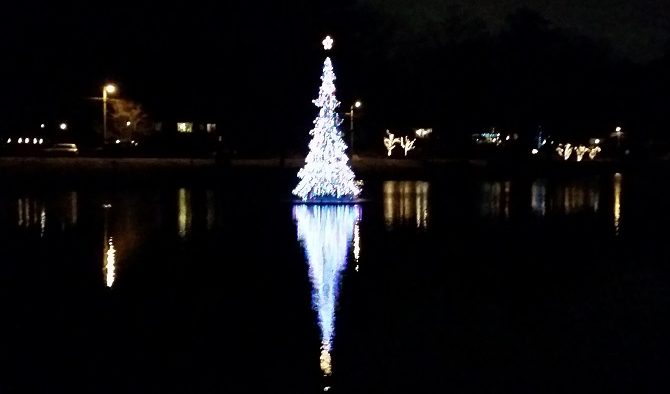 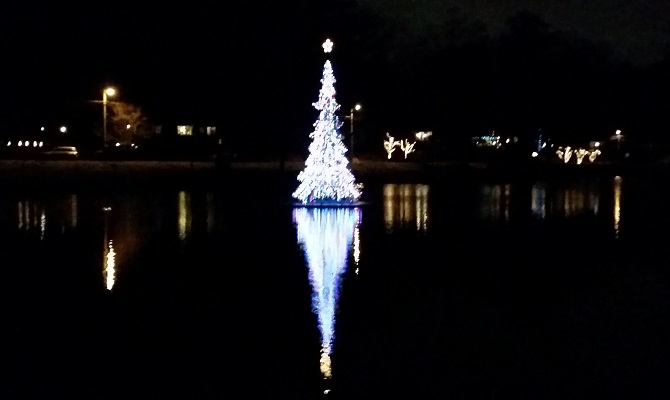 The Tree on Lake Avondale. Photo by Jill Nolin

Most people put up a tree for Christmas. Thomas P. Samford built a 30-foot-tall monument to the holiday in the middle of a lake.

When Samford accomplished this festive feat of engineering back in 1996, he created the mother of all decorations and a fitting centerpiece for the city’s proud historic district. Every year since, there has been a glow emanating from the lake.

What is now an Avondale Estates tradition was first conceived when Samford, a builder and self-taught engineer, was approached with the fanciful idea of building a floating Christmas tree.

The opportunity to create something for the community was probably enough motivation for a man who also built a gazebo and pedestrian bridge at the lake, the latter serving as a tribute to his late son, John, whose initials are carved into the wood.

This is, after all, the same man who stood up at a particularly tense City Commissioners meeting and spontaneously said, “It’s another beautiful day in Avondale Estates,” before sitting back down in his seat.

From then on, Samford would regularly say the phrase during the public comment portion of the meetings, bringing levity and perspective to the city’s commission meetings. Now, the phrase is printed on every meeting agenda.

“I think it was just his way of saying, ‘People, think about it. Look at where you are and what you have,’” said daughter-in-law Gail Samford, who has the phrase etched into her Avondale Estates driveway. 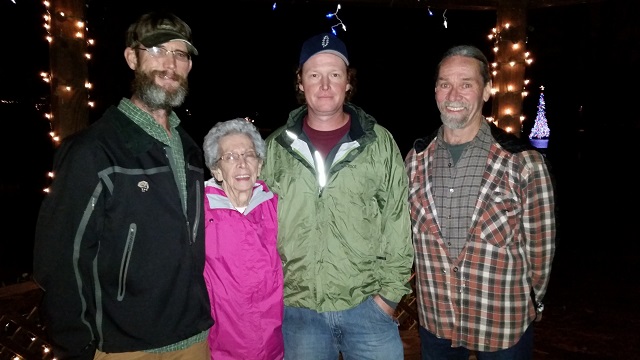 Casey, Corinne, Jeremy and Bill Samford pose for a photo after the annual tree lighting. Photo by Jill Nolin

But Samford, known as “T.P.” to his family, also wasn’t one to shy away from a challenge.

“It’s a floating Christmas tree and the power goes under water, ya know. That’s different,” said his grandson, Jeremy.

So Samford set out to bring the tree into existence, filling up a notebook with his drawings and calculations while carefully considering factors like the weight of the wood and the force of the wind.

This tree is not unchanging, though. This is the third iteration of the Lake Avondale arbor. The current one, which is made out of aluminum and sports more than 2,000 LED bulbs, is a lighter and far more energy-efficient version of its wooden predecessors.

The first one bobbed on the lake with the painted incandescent bulbs that the Samford family screwed in by hand one Thanksgiving. Corinne, Samford’s wife of 70 years, recalled a time when a wind gust toppled that inaugural tree. But even while submerged, those colorful bulbs were visible.

Listen: T.P. Samford tells the story of the tree lighting.

Improvements have been made over the years to avoid another underwater light show, but keeping the tree from cruising around the lake has been a recurring challenge. The Samfords tried a variety of strategies to remedy this, and eventually settled on placing anchors at the corners of the lake and mooring the tree with rope.

“Originally, we had cinder blocks just thrown out and drove in some wood, and that kind of worked unless the lake rose or a big wind came and then that didn’t work anymore,” Jeremy said. “So, five years ago or so, we took anchors – big, huge four-by-fours – and we put them way down into the mud with a bar going across it so we could wrap a rope around it and keep it tight.”

Today, what Samford sketched out and brought to life in the backyard of his Stratford Road home with the help of his family nearly 20 years ago is deeply woven into Avondale’s character and way of life. Commissioner John Quinn described the tree as a “special part of our history.”

The city provides labor, stores the tree in the offseason and foots the bill for the electricity while the family and community raise the funds for the tree and help resurrect and dismantle it every year. Diane Mahaffey, who originally proposed the floating tree to Samford after seeing one in Charleston, has been raising funds for the tree all along the way.

“I just think it’s something special that we have that so many communities don’t have. I’ve heard a lot of people say that the tree is special,” said Mahaffey, who went back to residents this year to raise money for the lights that outline the buildings downtown.

The floating tree is a tradition so enduring that it has outlived its maker.

When the lights came on earlier this month, it marked the second time Samford wasn’t there.  Samford always recited an inspirational verse and had his exaggerated faux light switch ready for the lucky child chosen to do the honor of “turning on” the Christmas lights.

His family – primarily his son Bill and grandsons Jeremy and Casey, who helped Samford from the beginning – work with city staff to ensure the tradition continues.

“We did it in the sleet, we did it in the rain, and every now and then, we actually had a good night,” said another former Avondale Estates mayor, John Lawson, who attended this year’s tree lighting ceremony.

This year’s lighting was on one of those good nights.

“One! Two! Three! Light that tree,” Casey led the group in yelling out.

And with that, the holiday cheer shone radiantly into the darkness of the water.