A vision for Memorial Drive

A vision for Memorial Drive 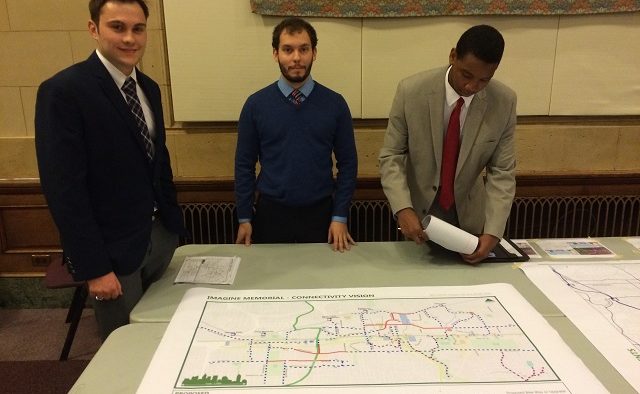 Students with the Memorial Drive Design Studio show off some of their recommendations. Photo by Kim Hutcherson
Share 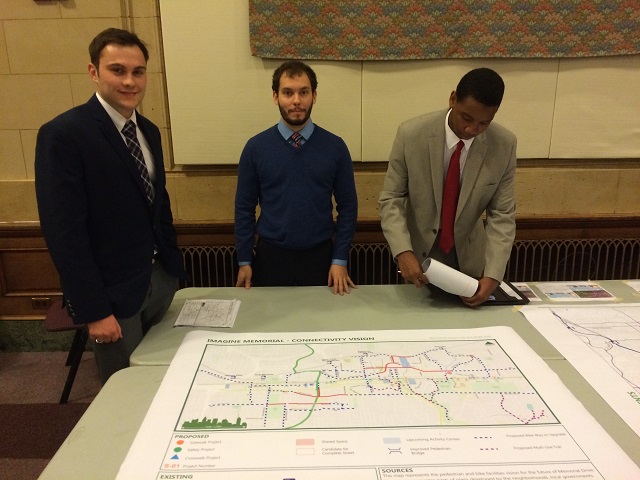 The students presented an overview of their findings Wednesday night, Dec. 3, at Atlanta City Hall. Their top recommendations for Memorial Drive include extending reversible lanes (with a significant improvement in signage) and reworking some key intersections, like Whitefoord Avenue and Cottage Grove Avenue. They also want to improve access to alternate modes of travel, like walking, biking or taking mass transit.

“I feel that the students have been very thoughtful,” Atlanta City Councilmember Natalyn Archibong, who represents District 5, said. “Although they are new to our community, they were so conscientious about finding out what was the view and vision of the community before they got to their respective desks and computers and figured out what they needed to do.”

Archibong lobbied Georgia Institute of Technology and Professor Mike Dobbins to get Memorial Drive chosen as the subject of this year’s design studio. She believes the effort has paid off.

“The ideas that they came up with were spot-on, it’s as if they were inside our heads,” she said.  “This is a phenomenal opportunity. It’s not going to be a dusty plan on a shelf.  We’re going to get busy and implement it.”

During September and October, Design Studio participants attended community association meetings and NPU meetings at five NPUs that bisect the Memorial corridor.  They spoke with a dozen private or nonprofit groups.

Dobbins, a former city planning commissioner whose previous classes have examined Atlantic Station, the Beltline, Northside Drive and Fort McPherson, oversaw and supervised the students. Their recommendations have been incorporated into some of these developments.

While some problems varied as students traveled east from downtown toward Candler Road, they said traffic and the safety of pedestrians emerged as a consistent concern.  Proposals related to calming traffic made up the bulk of the presentation.

Students recommended the reversible lanes on Memorial be removed in some spots and extended in others, specifically between Clifton Road and Second Avenue.

Memorial’s status as a transportation corridor with traffic patterns that change daily means alternatives to reversible lanes would likely encroach on existing properties, something the students ought to avoid.

At Whitefoord and Memorial, students would like to adjust the lights and install a raised “oval-about” – a modified roundabout – to allow commuters to roll through without getting caught behind people making turns.

They are also recommending changing the signal lights at the intersection where 4th Avenue and Cottage Grove Avenue meet Memorial Drive.

They are recommending improving sidewalks along the corridor, and building more bus shelters. They suggested a collaboration with MARTA to create a system that would provide real-time information on bus arrivals at each stop. They also want to enhance walkability options within half a mile of all existing and future MARTA train stations.

Some students analyzed housing and development patterns along the corridor.

Residents told students the need for affordable housing was a top concern. Long-time residents of neighborhoods along Memorial are feeling pressure from rising housing prices the students said.

A significant part of the students’ housing recommendations focus on:

– Developing local jobs which pay wages that will allow workers to own or rent a home in the area.

– Creating infrastructure that allows people to “age in place.”

So where does the plan go from here?

Dobbins and Archibong are hoping it will be approved as a Living Centers Initiative, a program of the Atlanta Regional Commission.

The ARC awards planning grants for living centers and corridors that are “consistent with regional development policies.”

Once approved, it could be grandfathered in to current ARC grants that can finance some of the transportation improvements. They would like to see the creation of some sort of foundation that can continue community outreach, attract capital and provide oversight and management for public sector funds.

But Archibong says there are significant steps to take before the recommendation get to the ARC.

“We have to have this vetted through all the neighborhoods, get a final work product in the template and the form that the planning department will accept,” she told Decaturish. “Then it has to run through all the communities, the NPUs and community associations. Then it percolates up to the full City Council. Then we have a document that can be forwarded to ARC and can be used for transportation funding programs, whether it is from the state or from the city. So once we have that formal, approved plan, then we can start the hard work of finding money and getting ready to implement.”

A complete list of Memorial Drive Design Studio recommendations, including locations and cost estimates, will be included in the Studio’s final report, which should go up online this month.  Check the Memorial Drive Corridor Design Studio Facebook page for updates or email [email protected]