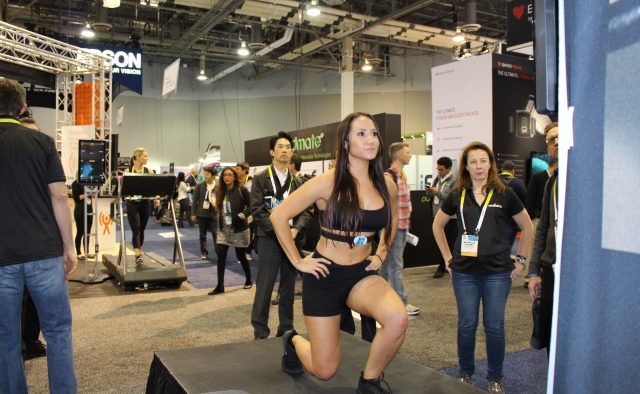 A Wahoo Fitness athlete at the company's CES booth demonstrates how the TICKR X can count reps. Photo by Dena Mellick
Share 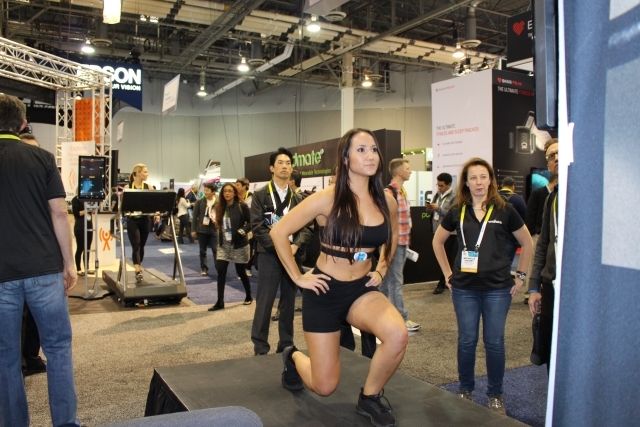 A Wahoo Fitness athlete at the company’s CES booth demonstrates how the TICKR X can count reps. Photo by Dena Mellick

Las Vegas – An array of wearable fitness devices was unveiled at the International Consumer Electronics Show (CES) in Las Vegas this week, just in time for all the get-healthy New Year’s resolutions.

Decaturish attended this year’s CES event and spoke with an Atlanta company that is working to make a dent in the growing fitness technology market.

Wahoo Fitness had a booth on the floor of the CES Fitness and Technology Marketplace at the Sands Expo. The company featured its line of three wearable TICKR products which analyze and capture your movement through a chest strap.

Instead of connecting to an additional wrist piece that you have to purchase, the company says it takes advantage of the powerful computer most people already own – a smartphone. 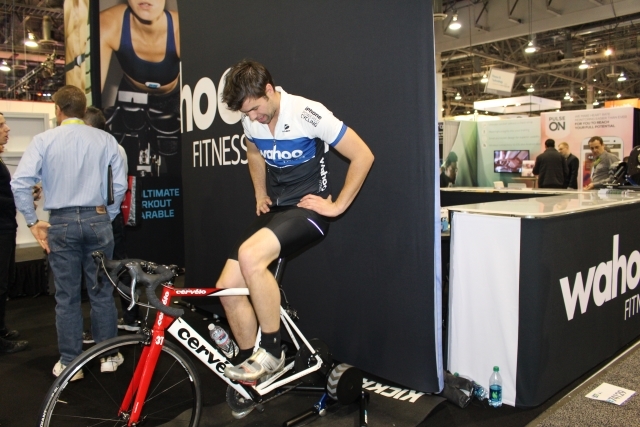 An athlete shows the capabilities of the KICKR cycling trainer at the CES Wahoo Fitness booth in Las Vegas. Photo by Dena Mellick

The TICKR chest strap will store your exercise data and then connect to your phone either during your workout or after you return from your run.

Wahoo Fitness’s newest product, the TICKR X, will track indoor cycling and evaluate your running efficiency, either on a treadmill or outside. Wahoo Fitness says its products are compatible with more than 100 popular fitness and training apps such as RunKeeper, MapMyFitness, and Nike+ – not just the Wahoo Fitness app itself.

Stashak said company founder Chip Hawkins started Wahoo Fitness four years ago. Hawkins was frustrated he couldn’t get the data from his bike’s sensors onto his smartphone.

Now the company, based in Buckhead, sells its products in Apple stores, BestBuy, Amazon, REI, and Dick’s Sporting Goods. The TICKR products sell for $60-$100. The company sells other products for athletes, including a 10-speed bike trainer, called the KICKR, which works with virtual-training software.

But there’s a lot competition in the wearable fitness industry right now.

Surrounding the Wahoo Fitness booth on the CES floor were both brand new and more familiar names in the wearables industry that were also unveiling new technology. CES has added more space to accommodate them.

The Consumer Electronics Association reported that the Fitness and Technology Marketplace expanded to more than 22,000 square feet in 2015, up 83 percent over 2014.

There are wearables that measure how high you can jump. There are health trackers that claim to be able to tell through your skin how much you’ve eaten. There are even pet fitness trackers that tell you how much activity your dog is getting. It may also help you simultaneously get those extra steps in as you help Fido reach his fitness goals.

There are wearable trackers that focus on style.

Misfit, a wearable products company, announced a new line of glitzy, Swarovski-crystal studded devices. Some of the Misfit wearables have a solar-powered battery, so you never have to charge the device.

And then there’s the ongoing argument of the value of wrist-based versus chest strap fitness wearables, seen and heard in pitches on the CES floor.

Fitbit has made a name for itself with wrist-based technology. The company showed off its new wristbands (Charge HR and Surge) that it says can actually track your heart rate through your wrist, thanks to new technology.

“The chest strap has been one of the standards. It’s generally assumed because of its placement that it’s very accurate. We believe that we’ve matched that accuracy in our heart rate technology,” said Tristan Rice, at the Fitbit booth on the CES floor.

But well-established GPS and heart rate tracking companies like Garmin and Polar continue to stand by the chest strap monitors. They showed off high-end wrist watches and trackers that can work with or without your chest strap depending on what you’re doing.

Wahoo Fitness is currently clearly in the chest strap camp, saying it’s the way to go for athletes wanting the most accurate heart rate monitoring.

Stashak added, “I’m sure we’ll find other places in the body to do it all, but right now, we find that the best, most cost-effective solution is at the chest.”

But no matter the preference, there is currently a market for all kinds of activity and workout trackers.

Industry experts are forecasting that in three to five years, we’ll all have multiple wearable devices that will interact with each other.

Wahoo Fitness is banking on that continued interest – and its valued Atlanta connections – as it looks to take advantage of growth opportunities in 2015.

The company also had a showing at the AT&T Developer Summit, which happens the same week of CES in Las Vegas.

Wahoo Fitness was a sponsor of the summit, which features a Hackathon and industry presentations. Wahoo started working with Atlanta-based AT&T Mobility two years ago. Stashak said of the sponsorship, “they approached us as a local Atlanta-based company to see if we’d be interested in sponsoring. We saw them also as a natural channel for selling our products, and so the partnership made sense.”

Developers received the TICKR X as part of their swag for attending the summit and could create apps during the Hackathon to work with the Wahoo Fitness wearable.

It’s clear Atlanta’s Wahoo Fitness is making a name for itself, but the company plans to move forward by utilizing the growing tech resources available in its hometown of Atlanta. 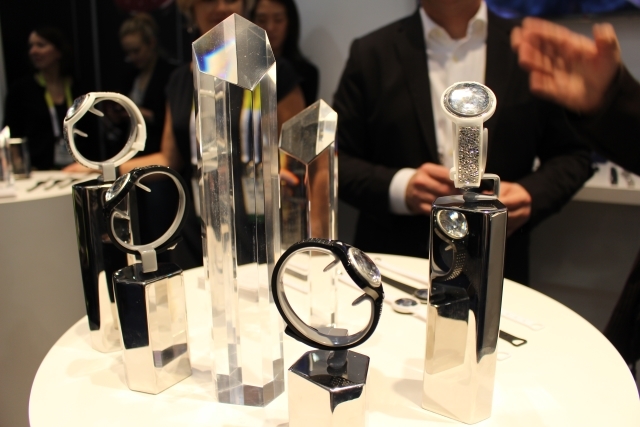