Atlanta Police have released another incident report that shows there were at least three carjackings in the Edgewood Retail District this month.

Yesterday, Decaturish reported that there had been at least two carjackings in January. After the publication of the story, readers contacted us about a third carjacking that also occurred this month. There are similarities between two of the carjackings.

On Jan. 24, police responded to a call at 7 pm about a woman was carjacked in in the parking deck underneath the shopping center. A woman reported that she had parked her 2012 black Jeep Grand Cherokee in the parking deck 10 spaces away from a stair case that leads to the Target store at the shopping center. An older model grey four door vehicle pulled up next to her and three men got out. One of them had something that the victim thought was a piece of wood that looked like a knife. The men approached her and the suspect with the knife said, “Give me your keys.”

The report puts the word “knife” in quotation marks throughout, indicating it may have been a fake.

She dropped her purse and handed over the keys. The suspect who threatened her with the knife grabbed the purse and all three climbed into the Jeep Cherokee and drove off. The only description of the suspects is three young, black men wearing dark clothing. She said the one holding the knife had an average build and being a little shorter than six feet tall. He was wearing a black mask during the crime.

Police later found the Cherokee abandoned at 1135 Harwell Street next to a vacant, boarded up house. Police recovered one print and found two marijuana blunts: one in the passenger side door and one in the cup holder. The blunts are undergoing D.N.A. testing, the report says.

The Jan. 24 crime has similarities to an incident that occurred two days later on Jan. 26.

Atlanta Police said a man had has Mercedes Benz taken from him at knife-point in the center’s parking deck.

Officers responded to the call just after 10 pm. According to the report, the man told officers that three young men were sitting in a red hatchback when he pulled into the parking deck. At first he was suspicious, but he wasn’t immediately concerned for his safety. But when he turned his back from them, one of the men grabbed him from behind and put a knife to his throat and yelled, “Give me the keys to your car!”

The victim’s right hand was cut as he was trying to protect his neck. He gave the suspect his keys. The suspect released the victim, pointed the knife at his stomach and said, “Now give me all your money.” The man “desperately searched his pockets and came up with roughly $65.”

The suspects are described as black males, wearing hooded sweat shirts and wool scarves over their faces. The victim could not recall any other details, but there is video surveillance of the crime. Police are reviewing the footage and the investigation continues.

Fox 5 also reported a carjacking that occurred around Jan. 11. The station reported that a University of Georgia Student was carjacked at gunpoint outside of the Best Buy. Decaturish has asked for a report in that case as well as any other carjackings that may have occurred this month. We have also reached out to building management for a response about what steps are being taken to ensure the safety of customers in the Edgewood shopping center. This story will be updated when management responds.

Safety concerns appeared to have died down after the arrests of the suspects in a violent July carjacking, but the latest rash of crimes has renewed calls for better security at the shopping center.

Woody’s Cheese Steaks provided this memo from the building’s management that was sent to tenants at the shopping center. 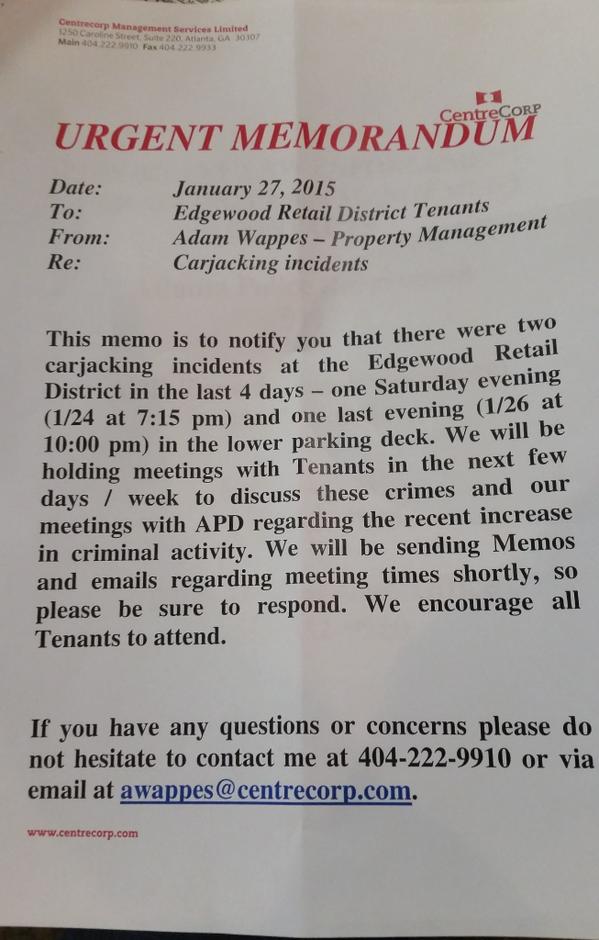