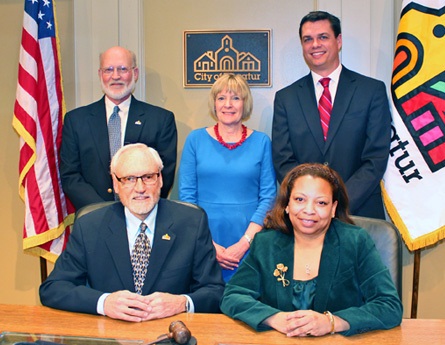 Unlike Avondale Estates, where the mayor is elected, in Decatur the mayor and mayor pro tem are commissioners selected by fellow commissioners at the first meeting of the calendar year.

The mayor and pro tem serve one year terms. Mayor Jim Baskett was first elected by fellow commissioners in 2013, succeeding Bill Floyd who resigned his commission seat to take a consulting job. Commissioner Kecia Cunningham was elected pro tem in 2013.

Baskett was elected as a commissioner in 1995 and previously served as mayor pro tem from 2002 to 2012, according to his biography on the city’s website. He graduated from the Candler School of Theology and studied social ethics and political thought at Emory University. He lives in the South Candler historic district with his wife Mickey, “and can be seen around town driving their electric GEM car.”

According to her biography on the city website, Cunningham was first elected to the City Commission in 1999. She’s lived in Decatur since the 1980’s and is a graduate of Agnes Scott College. Among her accolades: the Human Rights Campaign Community Leadership award, Who’s Who in Black Atlanta, and Agnes Scott College’s Outstanding Young Alumna. She works as an associate financial representative with Northwestern Mutual.