Decatur Police have released the preliminary numbers for December, and they show a 10 percent drop in crimes for all of 2014 compared to 2013.

The numbers reflect a continuing trend, both locally and nationally, of dropping crime rates. Decatur tracks crimes via Uniform Crime Reports of Part 1 offenses, the crimes most likely to be reported to police like burglary and robbery. Crime in the late 80’s early 90’s was mindbogglingly high. There were 328 violent crimes reported in 1989 alone, including six murders, 17 rapes and 143 robberies.

Much has changed since then. Crime hit a historic low in 2011, with just 29 violent crimes reported, an 91 percent decrease from 1989.

The pace has picked up since then and 2013 was definitely an uptick. There were 818 Part 1 crimes reported, with about 40 violent crimes. Overall crime was up 18.4 percent in 2013 compared with 2012. The increase in crime resulted in tense meetings and was dubbed a “crime wave” by residents and the media.

For the purposes of this story, we are excluding the number of simple assaults, which is tracked by Decatur Police but is a crime that doesn’t result in significant bodily harm.

The 2013 wave appears to have ebbed a bit in 2014. Violent crime decreased by 20 percent, and crime overall crime has dropped by 10.4 percent. 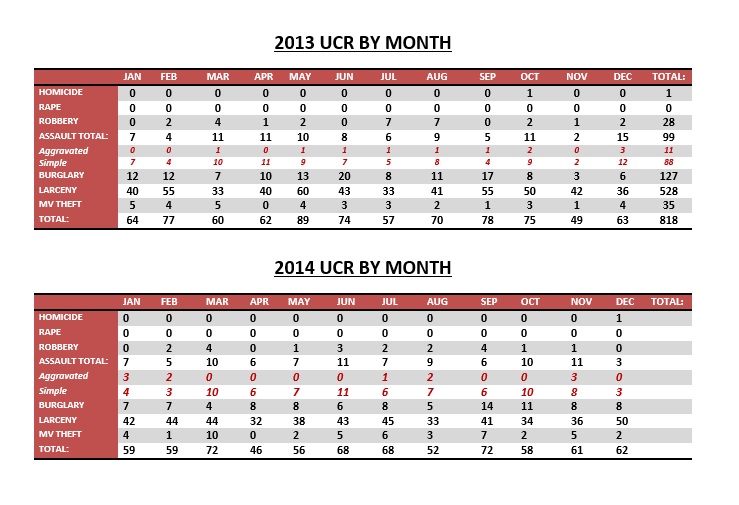 For a more detailed analysis of this issue, check out our breakdown of stats during the 2013 “crime wave.”