Decatur School Board will vote on whether to “ratify” annexation proposal

Decatur School Board will vote on whether to “ratify” annexation proposal 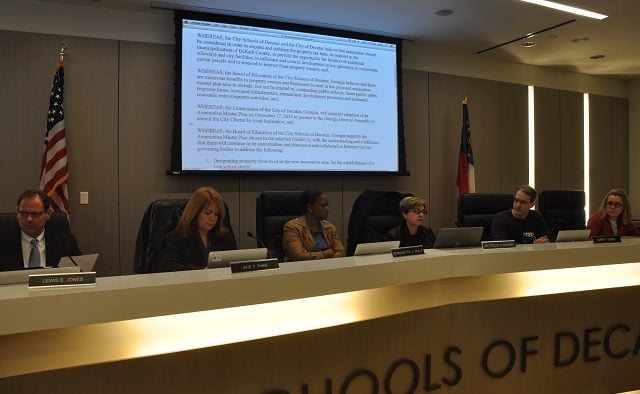 The City Schools of Decatur Board of Education met on Dec. 17, 2014. File Photo by Dan Whisenhunt
Share 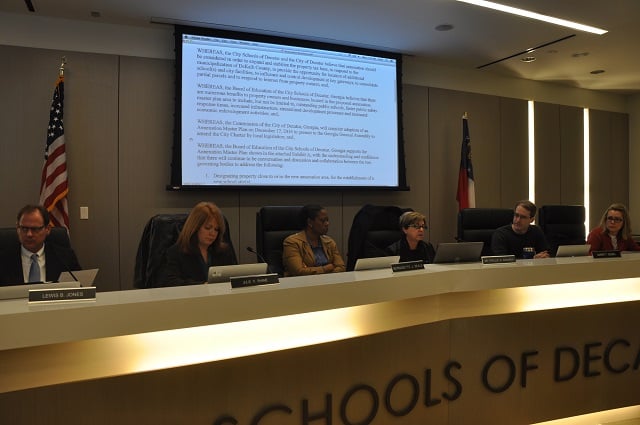 The City Schools of Decatur Board of Education met on Dec. 17, 2014. File Photo by Dan Whisenhunt

Remember when City Schools of Decatur’s Board of Education approved a resolution supporting the city’s annexation plan?

The meeting occurred early on Dec. 17 and had low attendance. But school board members will vote on the same plan again at their upcoming meeting on Jan. 13.

Among the agenda items is a proposal to ratify the resolution that was unanimously approved at the Dec. 17 meeting.

School Board Member Julie Rhame explained, “We said at that special session meeting where we voted on the annexation … that we would bring it back for official ratification at our regular board meeting because it was right before the holiday, and being such a busy time of year, not many people could attend.”

So in other words, if you have issues with the plan, this is your chance to weigh in. The meeting begins at 6:30 pm 125 Electric Avenue. All meetings are open to the public.  The school board’s approval was something the city asked for before it presented the annexation plan to the DeKalb County Legislative Delegation. So far, no annexation bill has been introduced.

The Decatur schools system’s current enrollment is around 4,300 students. A consultant’s report on enrollment estimates that the city’s school system will grow to 7,398 students by 2020 without annexation in a high-growth scenario. Annexation will add an additional 747 students to the city’s borders. As the city’s school system grows, it will be hard-pressed to find room for its student population without expanding its borders. Decatur’s current annexation plan would add 1.6 square miles to the city’s limits.

Estimates produced by a consultant project that without annexation, the city’s tax rate is likely to increase as the system tries to find more room to grow.

When the School Board approved the resolution, it did so with the understanding that the city would help the school system by …

– Identifying an area for a new school. School Board member Garrett Goebel said the wording is intentionally vague but said it would most likely be another elementary school.

– Encouraging future commissions to be cautious about rezoning commercial areas as residential areas.

– Putting a General Obligation bond on the ballot in 2015 so the school system pay for expanding its facilities. During the meeting, board members said legislators have discussed the possibility of putting all annexation referendums on the ballot in July and the school board would push to have its General Obligation referendum in November. Board members said a November vote on a GO bond would bring out more parents to support it and also avoid tying it to the issue of annexation. The bond will be needed either way to pay for expanding CSD’s facilities, School Board members said.

– Delaying the date CSD has to begin providing educational services to the newly-annexed areas until 18 months after the effective annexation date.