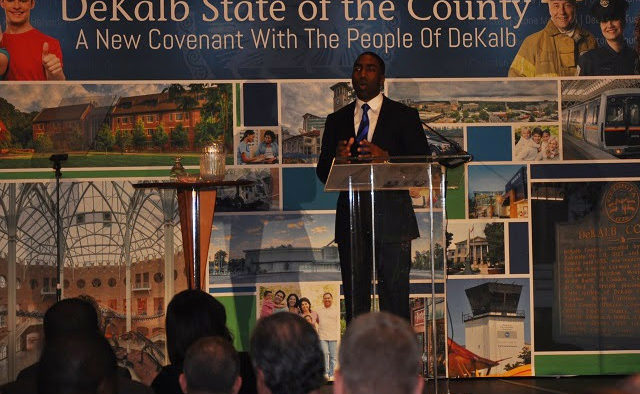 DeKalb CEO Lee May delivers his “State of the County” speech on Jan. 22, 2015. Photo by Dan Whisenhunt
Share DeKalb CEO Lee May delivers his “State of the County” speech on Jan. 22, 2015. Photo by Dan Whisenhunt

He stood in front of a banner that read, “A New Covenant with the People of DeKalb.”

“Proverbs tells us, without a vision the people perish,” May said, standing before the crowd of elected and business leaders gathered at the Thalia N. Carlos Hellenic Community Center on Jan. 22.

The speech was not short on vision. May’s proposal for a “Downtown DeKalb” on Memorial Drive was touted as a chance to transform the area into a destination for visitors, young families and retirees. It would involve moving county administrative offices out of downtown Decatur and using them as a tool for economic development elsewhere.

But people looking for anything more detailed than a broad vision weren’t going to find it during May’s speech. A gaggle of reporters surrounded him after the speech and pressed the county CEO for answers.

Has there been a cost benefit analysis of this idea?

“We are at the front end of this in terms of bringing all what it would cost to construct something like this, who we’re going to partner with, how we’re going to pull all the land around that area together,” May said.

How much will it cost, ballpark?

“It depends upon the size of our footprint,” May said.

Where will the money come from?

OK. What about a time frame?

“We want to do this as quickly as possible, in order to transform the Memorial Drive Corridor,” May said. “We’ve had no less than seven different studies all saying the same thing. We need to put a government center at Memorial Drive. We need to focus on commercial development in that area, and we’re simply implementing what everyone has been saying we ought to do. Today was my announcement. The real work begins now, to pull all of the partners together.”

He added later that there will be significant work over the next year or so to put some meat on the bones of the Downtown DeKalb concept.

Decatur Mayor Jim Baskett said the idea of moving these offices out of Decatur is not new. He recalled that he and former Mayor Bill Floyd met several years ago with then-CEO Vernon Jones about the city purchasing the Callaway Building from the county, which it eventually did.

“We were told at that time the county was going to move as many operations as was possible from Decatur out to Memorial Drive and they were going to start with the Callaway Building,” Baskett said. “It’s no big surprise really. It’s nothing new really that the county plans to move operations out that way. I guess it’s a matter of what operations and how much of a move they’re talking about.”

After the speech, Baskett said the idea still has merit even if the speech lacked some crucial details.

“It didn’t have the kind of detail maybe we were looking for,” the Decatur mayor said. What he did talk about was very good. There’s no question that the Memorial Drive Corridor could use some attention. If he wants some help on trying to develop a vital district around the county operations, well, we know how to do that in Decatur and we’ll be happy to help.”

Commissioner Patti Garrett sat with Baskett and City Manager Peggy Merriss during the speech. Merriss deferred to the mayor. Garrett said whatever is going to happen, it won’t be done quickly.

“Personally I’d like to see the administration stay in Decatur,” she said. “I think just for that collaboration as well as the nearness … It is the county seat, but we’ll just have to see how it plays out over time.”

Legally, the county seat will remain in Decatur.

Floyd, who is now the Executive Director of the DeKalb Municipal Association, said that may limit what the county can relocate to Memorial Drive.

He also questioned whether the plan had enough buy-in from other officials.

May has a message for the skeptics and naysayers who doubt his vision: just watch.

“To those who are skeptical I would just tell them to watch us and to partner with us to make this happen,” he told reporters.