Heads up for Realtors, homebuyers in DeKalb: Don’t bank on annexation

Heads up for Realtors, homebuyers in DeKalb: Don’t bank on annexation 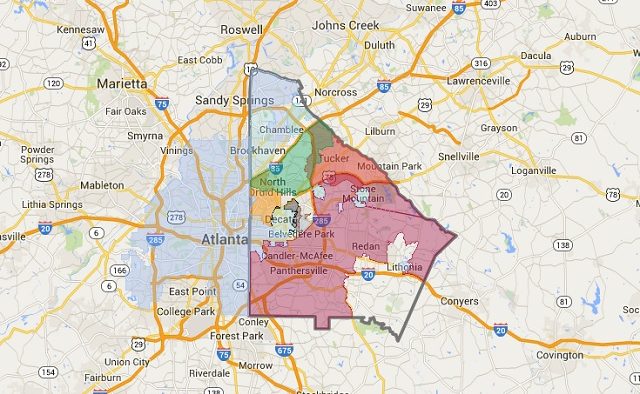 Annexation and cityhood will be a huge factor in the 2015 housing market in DeKalb County.

As we noted yesterday, local Realtors are already fielding questions about it from potential buyers. Proposals to create new cities in DeKalb are pushing cities to claim areas in unincorporated DeKalb for potential annexation before there are no areas left to claim.

The issue is confusing. Case in point: Decaturish received this email alert for a property listing for a home near Decatur.

The description listed “Just approved city of Decatur annexation!” as one of the home’s selling points.

But that doesn’t mean the property is going to become a part of Decatur.

What the listing is referring to is the Decatur City Commission’s recent approval of its annexation master plan. The master plan includes a map of areas the city would like to annex, a map that includes the property in the real estate listing we received. Buyers and Realtors should note that the annexation map is a few steps removed from becoming a reality.

First, the map will need to be introduced as local legislation in the General Assembly. State Rep. Mary Margaret Oliver, D-Decatur, said she will file a bill on Decatur’s behalf if the city asks her to, but no bill has been filed yet. The last time the city pursued an annexation bill, no one in the delegation would sponsor it.

So there are several steps between being on the map and being in Decatur, or any other new city. If you see a property listing, how can you determine its annexation status?

A few months ago, Decaturish created an annexation cityhood map, which has been updated for 2015. Homebuyers and real estate agents can search for addresses within the map to determine a property’s status.

2) Type the property address in the search bar.

But there’s an important caveat here. Property owners can also annex into a city using a petition method. Decatur has annexed property using the 60 percent petition method, which requires petitioners to get the signatures representing 60 percent of land owners and registered voters.

It’s possible that cities could approve petition annexations ahead of any action by the Legislature. It’s an evolving issue. We’re working to keep our annexation map up to date with all the latest changes, and we are encouraging readers to notify us of any changes we aren’t aware of. To reach us, email [email protected]