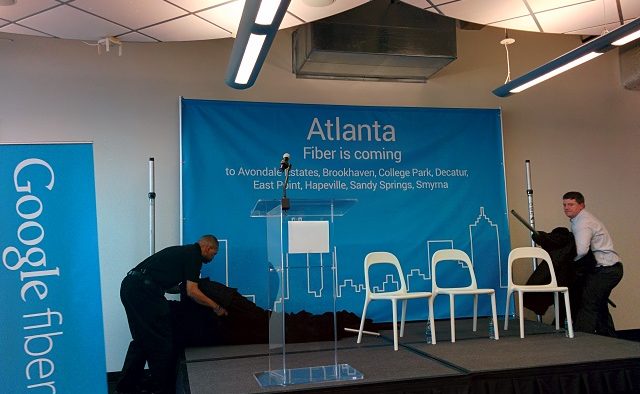 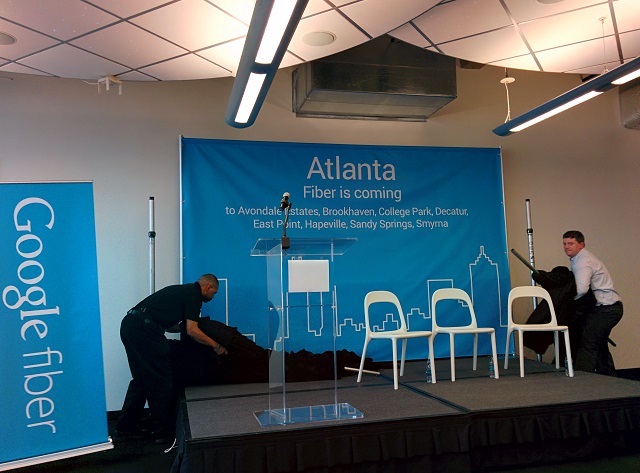 A banner on display at today’s Google press conference. Photo by Dan Whisenhunt

Today officials with the internet search company Google confirmed that the company will be bringing its high-speed fiber internet service to the Atlanta Market.

The company is making the announcements at its offices in Atlanta during a press conference. Decaturish.com is attending and will update this story as more details become available.

Atlanta Mayor Kasim Reed said, “Today is one of the amost important moments in the life of the Atlanta metropolitan region.”

Company officials said the build out of the fiber network would occur over the next couple of years.

The company in February announced more than 30 “potential” Google Fiber cities around the country, including Avondale Estates and Decatur. The company says its service will be 100 times faster than average broadband speeds.

Google had said it would make an announcement about which cities would receive the service by the end of 2014, but in December postponed that decision until after the holidays.

That February announcement led to a flurry of activity as cities worked to complete Google’s checklist. All of the cities met Google’s May 1 deadline, and the company said it would make its announcement by the end of 2014.

While everyone waited for that news, AT&T announced its intentions to provide a gigabit internet service, and Comcast announced it would be expanding its 10 gigabit fiber network to businesses in the Atlanta Metro area.

Over the weekend, media outlets reported that the company planned to bring its fiber service to cities in North Carolina, including Charlotte, Raleigh, and Durham.