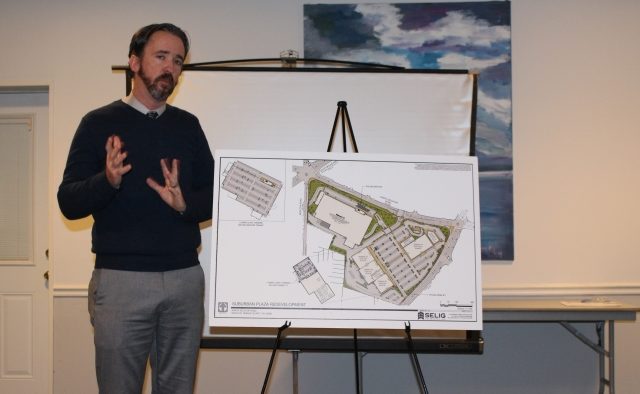 Greg Catoe, Project Manager of the Suburban Plaza redevelopment for Selig Enterprises, discussed timelines at the DHNA meeting for the new businesses coming to the shopping center. Photo by Dena Mellick
Share 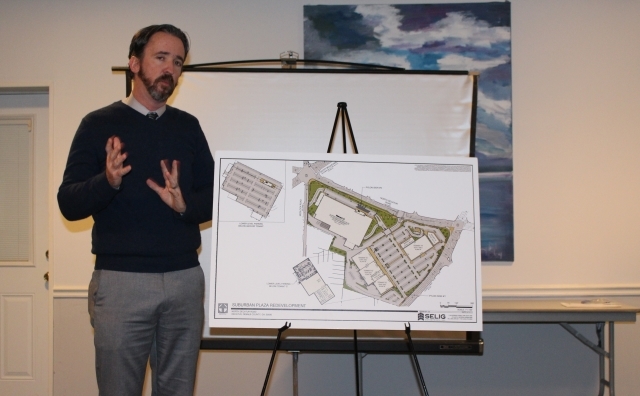 Greg Catoe, Project Manager of the Suburban Plaza redevelopment for Selig Enterprises, discussed timelines at the DHNA meeting for the new businesses coming to the shopping center. Photo by Dena Mellick

Decatur’s Suburban Lanes Bowling Alley will not remain in the redeveloped Suburban Plaza. A book store may end up taking some of the basement space of the plaza on the Church Street side near where the bowling alley is now, according to developer, Selig Enterprises.

Bill Stogner, a senior vice president with Selig, said of the bowling alley, “We tried to keep it … Financially it was overwhelming for both of us.” Stogner said Suburban Lanes will stay through the end of April.

Stogner announced that Selig has a letter of intent with Half Price Books, an independent seller of books, magazines, and music, based out of Dallas, Texas. Stogner said the developer is working to get a lease signed on 9,000 square feet of space for the book store.

Stogner said leases have been signed with Walmart, LA Fitness, HomeGoods, and Jo-Ann Fabric and Craft Stores. Another craft store that had been in Suburban Plaza, Hancock Fabrics, moved to Tucker this month.

Other businesses slated to move in include Starbucks (with an approved drive-through), AT&T, and Ross Dress for Less. Stogner said of Ross, “I’m excited about it, just from a retail perspective, because it brings apparel to the shopping center, and because of that apparel, we’re able to add a couple other things that we might not have gotten already.”

There are also plans for additional restaurants, including an Atlanta-based organic restaurant. Stogner wouldn’t give a name, but said he expects to know more this week.

Despite previous reports that Cozy Burger Town would be replaced by Starbucks, Stogner said the developer is trying to work with Cozy Burger so it can remain in the plaza. Other businesses that are sticking around: Moe’s Southwest Grill and the medical scrubs store Uniform Advantage.

Greg Catoe, the Selig project manager for Suburban Plaza, said Walmart is currently digging out the space for its underground parking. He said current plans indicate it could potentially open for business this fall. Readers may remember that last year Good Growth DeKalb suspended its fight against Walmart opening in the shopping center following an extensive legal battle.

Catoe said the existing space where LA Fitness will go is set to be torn down, with demolition beginning in the next two weeks. LA Fitness will open either late this year or in early 2016.

Much of the rest of the shopping center will undergo façade renovations, including the buildings where Big Lots, Piccadilly, and Hancock Fabrics were located. Catoe said those will start in February, with tenants opening for business in a year.

“We will be renovating the parking lot. As you know, if you’ve been out there, there’s been very little landscaping on the site. … We’re actually adding about an acre and a half of new green space,” Catoe said.

The Selig Enterprises representatives also emphasized that they’re working on street improvements around Suburban Plaza. Those additions include a 10-foot wide multi-use path for pedestrians and cyclists along North Decatur Road. Catoe said a five-foot wide bike lane will be added along Church Street.

A traffic light will be installed at the North Decatur Road entrance to the plaza, and Stogner said Selig Enterprises has agreed to “speed dampening” tactics on Medlock Road. Median islands have also been slated for Sycamore Drive and Medlock Road to indicate drivers are entering a neighborhood.

During the presentation, one resident asked about expected security in Walmart’s underground parking garage, citing recent crimes at the Edgewood Retail District, which also has underground parking. There have been three recent carjackings at Edgewood, with two happening in the underground lot.