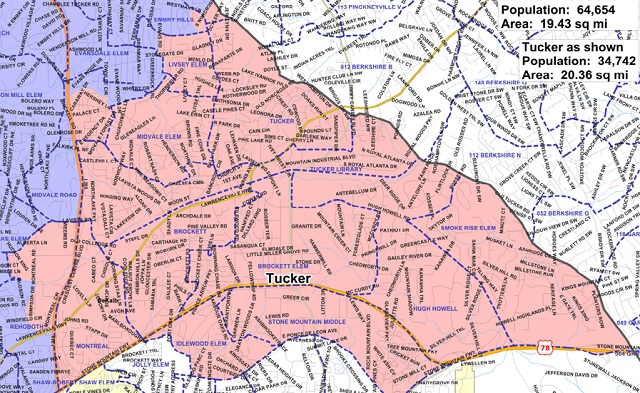 There are several proposals for new cities in DeKalb County that are in various stages of development. The two most prominent ones are the proposed cities of LaVista Hills and Tucker.

Tucker on Jan. 20 announced that it is pushing forward by updating the feasibility study to reflects the maps approved by members of the state legislature.

Back in December, a legislative panel settled a boundary dispute between the two proposed cities, dividing up the contested Northlake Mall area. Splitting an important base of commercial tax revenue means that the cities are reexamining their feasibility studies.

Recently the leaders of the LaVista Hills movement recently told unincorporated DeKalb residents living in the proposed boundaries of the city that a feasibility study is not required for their proposal to move forward in the 2015 session. However, they plan to conduct one after being advised by members of the state legislature that it would be a good idea. Cost will be an issue for the group. LaVista Hills combines the two previous proposals for Briarcliff and Lakeside. Since both already had feasibility studies, conducting another for LaVista Hills would’ve meant going back to donors for an additional $20,000 or so for a new one.

Penkava said Tucker’s study is being updated by the Andrew Young School of Policy Studies at Georgia State University.

“This is an important step in moving our bill forward, both to the Governmental Affairs Committee and to our community,” Penkava said. “We look forward to working with newly appointed House Governmental Affairs Chairman Rep. Ed Rynders, R-Albany, to provide the committee members with the information they need to feel confident that moving Tucker forward is in the best interest of the community and the State of Georgia.”

Tucker has fewer logistical hurdles to cityhood than the other proposals. While its map does overlap with the city of South DeKalb, there’s no bill for either of them. The last update from the City of South DeKalb’s website in November said a feasibility study was supposed to be completed by Dec. 31, but it’s not clear if that happened. We reached out to Concerned Citizens for Cityhood of South Dekalb for an update on their progress and will update this story when representatives respond.

Given that Tucker is a few steps ahead of South DeKalb, it would appear the city’s proposal at least has a chance of moving forward this year without too many complications. Not so for LaVista Hills which is still in competition with an annexation map proposed by a group called Together in Atlanta. That proposal, which encompasses the Druid Hills neighborhood and its elementary schools, doesn’t have a bill either, and it’s not clear whether there will be competing bills introduced or whether the two groups will reach some kind of a compromise.

The possibility of a changing LaVista Hills map makes feasibility more difficult to determine until the boundaries are settled.

We have also reached out to LaVista Hills representatives for a status update, and will update this story with their response when it is received.

Here are the maps, and their conflicting boundaries, as they currently stand: