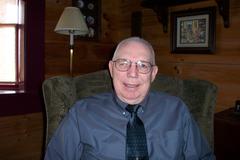 John Pomberg moved to Avondale Estates from Iowa in 2012 and quickly blended into the community.

He started attending City Commission meetings. He opened his doors to Kensington Road town home to the city’s Christmas tour of homes in 2013. The U.S. Navy veteran is vocal and interested in county government. This week, he became the second resident to qualify for the special election to become the city’s next mayor.

“I’m running for mayor for a number of reasons, because the position is available and it needs to be filled,” Pomberg said.

Pomberg has a wife, Diane, and moved to Avondale to be closer to his son and daughter-in-law.

Pomberg joins Paul Brown, an architect who serves on the city’s Board of Appeals, in the race to replace former mayor Ed Rieker who resigned in October to pursue a university teaching job.

Former pro tem Terry Giager is serving as mayor in the interim. That leaves the board with four commissioners, which concerns Pomberg. He noted that at a recent commission meeting, Commissioner Lindsay Forlines had to abstain from voting, leaving the commission with three members who could cast votes.

“It’s not good for the city if you have to put yourself in a somewhat precarious position like that,” Pomberg said.

Pomberg served in the U.S. Navy from 1967 to 1988, aboard aircraft carriers in the Tonkin Gulf, Persian Gulf, Southern Atlantic, and Caribbean. He worked in Iowa Department of Corrections and was active in Democratic politics, serving on the Davis County Iowa Democratic Veterans Caucus. He was also part of a Veterans & Military Families for Obama steering committee in 2012, according to the Des Moines Register. He holds a sport pilot license for recreational flying.

He said he just wants to keep Avondale moving forward.

“(If elected), my first day is to kind of keep the momentum on the annexation going and to keep people informed on that, as Mr. Giager has done so well in the few months he’s been in charge of that,” Pomberg said. “I’m also very interested to see how the redevelopment of the Fenner Dunlop property is going to shake out.”

There won’t be any major shakeups if he is in charge, he said.

“I have no ambitions to go in there and do a turn-the-bucket-upside-down kind of thing,” Pomberg said.

Qualifying ends on Friday, Jan. 16. The special election will take place on March 17.