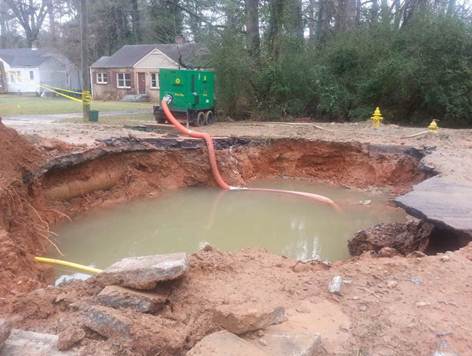 DeKalb County is still working on repairing a 36 inch water line along Parkhill Drive in Decatur.

While most of the water pressure has been restored, the breakdown of the water main on Thursday closed schools in Decatur and Avondale.

“All storage tanks were filled last night and pressure appears stable throughout the system, except for the immediate area around the leak at Parkhill Drive,” the notice from the county says. “DeKalb County Department of Watershed Management crews will replace the damaged pipe today and restore the system during the weekend.”

There are no boil water advisories at the moment, but the county is still monitoring the situation.

The pipe is pre-stressed concrete and more than 40 years old. It was slated for replacement by the county as part of plans to upgrade its water and sewer infrastructure. According to the Atlanta Journal Constitution archives, a main break near Parkhill Drive in 2006 affected 50,000 homes and led to boil water advisories.

The infrastructure is notoriously out of date. Kathleen Andres, who has gone round and round with the county over its claims that some sewer lines are private, provided this map showing the age of sewer pipes in the area, broken down by state Senate district. As you can see, there’s a lot of red, denoting pre-1960’s era sewer infrastructure in Senate District 42, which includes Decatur, Kirkwood and Avondale Estates. (Note: The current SD 42 senate rep is Elena Parent, who replaced Jason Carter after he resigned his seat in a failed bid to unseat incumbent Gov. Nathan Deal.)