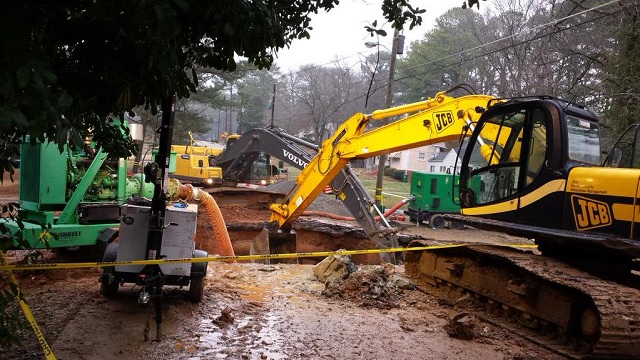 Photo of the water main break on Parkhill Drive near Glenwood Road in Decatur. Photo provided by Matt Stringer of Fox 5, Atlanta
Share

Photo of the water main break on Parkhill Drive near Glenwood Road in Decatur. Photo provided by Matt Stringer of Fox 5, Atlanta

A water main break that ended class early for students in Decatur and Avondale Estates is on its way to being resolved, the county says.

The outage cropped up on Thursday morning after a 36 inch water main on Parkhill Drive near Glenwood Road in Decatur broke. That caused water pressure to drop, leaving local schools without working restrooms.

On Thursday afternoon, the county said water pressure has been restored in most areas.

“We have achieved the needed isolation of the large 36-inch line and are making the final repairs on it.  The majority of the main system has been pressured back up to meet the needs of our public and should not pose any further issue during the repair,” Charles Lambert, Assistant Director of the DeKalb Department of Watershed Management, said in a press release.

According to the county, only the area surrounding Parkhill Drive will have issues with low water pressure over the next couple of days as crews work to repair the damaged pipe.

“The pipe is a pre-stressed concrete pipe which is more than 40 years old,” the press release from the county says. “The section was previously identified for replacement under the county’s $1.35 billion water and sewer capital improvement plans. There are no boil water advisories at this time, but engineers are continuing to monitor the situation closely.”

The problem created minor chaos as City Schools of Decatur and some DeKalb County Schools requested parents pick up their children from school.

City Schools spokesperson Courtney Burnett said the early dismissals were necessary to protect the health of the students.

“It’s a sanitation issue,” she said. “If we don’t’ have anywhere for the kids to go to the bathroom, we can’t keep them in school all day.”

All schools in Decatur will be open on Friday, Jan. 16.

Avondale spokesperson Kelly Brooks said DeKalb Schools bused students from Avondale Elementary to Midway Elementary after lunch so they can use the restroom there. The Museum School and Sudbury School of Atlanta also dismissed students.

The outage has affected other areas in DeKalb including Atlanta, Clarkston and Scottdale.

According to the CSD Facebook page, there was problem with the parental alert system, which created confusion. “We apologize if you received multiple calls,” the message on the Facebook page says. “There was a glitch in the system. All schools are releasing early.”

Reader Rachel Ellis sent this photo of the scene at Clairemont Elementary in Decatur after CSD issued the alert to parents. “They’re working hard to make sure students are safely dismissed! Heather Borowski (interim principal) is even doing it with a smile on her face. It’s bananas, though.” 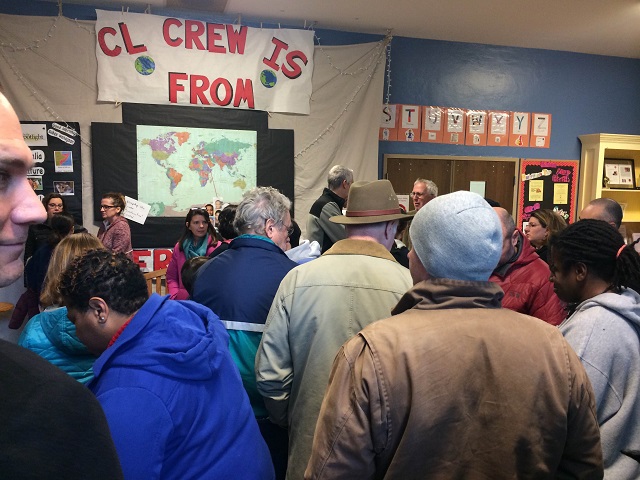 Andrew Cauthen, editor of The Champion Newspaper, took this photo. 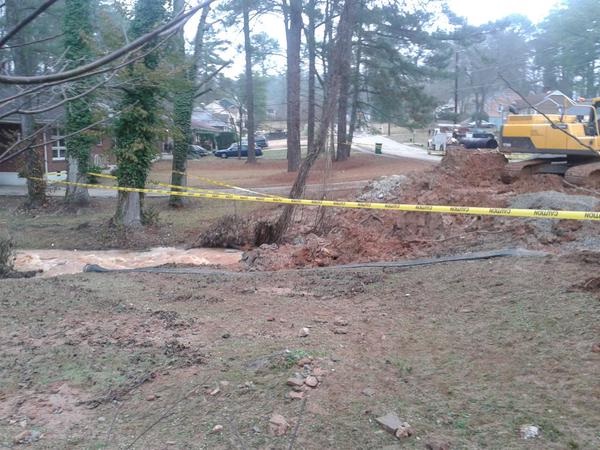 “This water main break shut down schools in the city of Decatur.” – Andrew Cauthen

According to the Atlanta Journal Constitution archives, a main break near Parkhill Drive in 2006 affected 50,000 homes and led to boil water advisories.

We will continue monitoring this situation. Check Decaturish.com for updates.