Annexation, transparency of government, education, and parking. Those seemed to be the main topics of interest Thursday evening at a forum for the five candidates competing to be the new mayor of Avondale Estates.

Judge Stephen W. Nicholas moderated a question and answer session at City Hall in front of a packed house.

Each of the five candidates got three minutes for an opening presentation. The order of presentation was determined ahead of time by a random drawing.

Paul Brown, Jonathan Elmore, Jim Hutchens, John Pomberg, and Todd Pullen each talked a little bit about themselves, how they arrived in Avondale Estates, and their vision for the city. 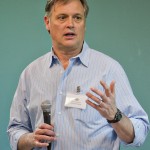 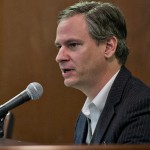 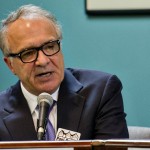 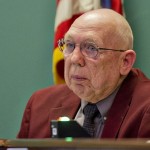 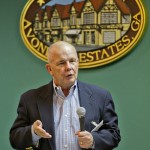 Brown, Elmore, and Pullen each have architecture backgrounds.

After introductions, audience members guided the rest of the evening, posing questions to the five candidates. 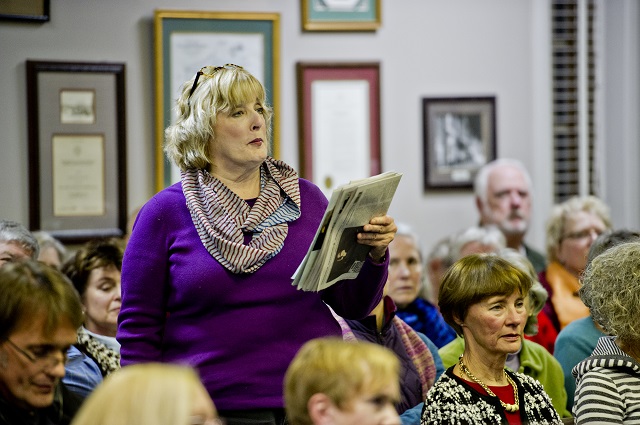 The first question, right out of the gate, was about ethics.

Avondale Estates resident Peggy Roney asked all of the candidates if they thought it was ethical “for a seated mayor to profit personally from a purchase of important downtown properties.”

Elmore said it was not illegal, but that purchases needed to be fully disclosed.

Pomberg felt it was not unethical to acquire properties if the purchase was disclosed.

Pullen and Hutchens said it was unethical to profit from the position of mayor.

Brown called for transparency, saying it’s important to build a community on trust. 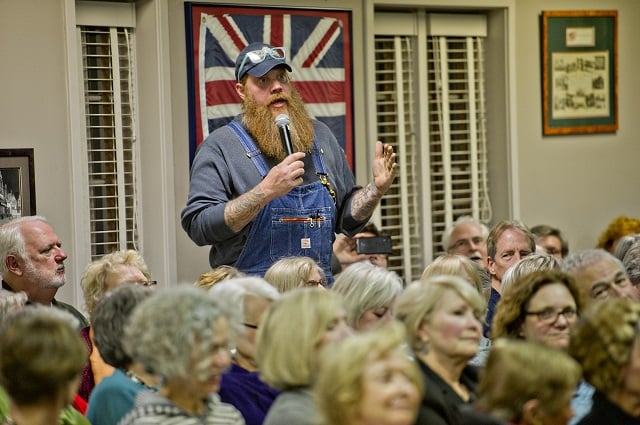 Jim Stacy, owner of Pallookaville, got a laugh when he listed several of the big topics like annexation, schools, and transparency, but said what he really wanted to hear from the candidates was, “what we’re going to do about parking!”

Stacy said the city is expecting people to make investments with no clear vision of parking for the business district.

Hutchens said the Downtown Development Authority (DDA) would be the “vehicle” to get a parking garage built downtown. He said potential challenges would be financing and making sure the garage was low-profile and set back from the street.

Pomberg said he supported a formal relationship between the DDA and the Board of Mayor and Commissioners as a way to find a parking solution.

“Can I look you in the eye and tell you exactly where I’d put the parking? No, I can’t. But I think there’s talent in those two groups that can solve that,” Pomberg said.

“DDA is a great place to start … The city also has four acres that we’ve purchased within the past couple of years that I think could also be used as leverage to include more parking in new developments,” Pullen said.

Brown said for incoming businesses and developments, “We really need to consider making everyone who is coming into the city provide their own parking.”

Elmore said that at a recent work session, Robert James, the head of the DDA, emphasized that building a parking deck is a top priority. However, Elmore said how and when is not yet clear.

A teacher asked the candidates about revitalizing and strengthening Avondale’s schools. A lot of the group’s answers had to do with building community around Avondale’s elementary and high school.

Elmore suggested an ad hoc committee focused on education. Pullen noted that many parents bank on the Museum School, but their children aren’t able to get in, so more support is needed for other area schools.

As expected, annexation was a hot topic. A resident asked how to prevent becoming too dense and overcrowded through annexation.

“Some density is good, because it encourages pedestrian traffic, it kind of creates street life, it creates that buzz, that momentum. … [But] we need to make sure we are incorporating enough parking,” Elmore said.

Hutchens said, “I think you’re asking about controlled annexation. This year, we didn’t control it. … Annexation is like adoption. You can’t annex somebody, and then say, ‘it didn’t work.’”

Hutchens had clarified earlier in the discussion that he’s not completely against annexation; he said he believes there are current problems that are not being addressed in Avondale that need solutions first.

Each candidate received two minutes for closing statements. The city allowed them to remain in the hall to answer additional questions from audience members.

Whoever wins the special election will only serve until the end of the year. The city says the mayor’s seat will be up for reelection on Nov. 3 of this year, with that candidate beginning a four-year term on Jan. 1, 2016.

Advance voting will take place at the DeKalb County Elections Division at 4380 Memorial Drive, according to the city.

City Manager Clai Brown said there will not be a runoff election if one candidate does not win more than 50 percent of the vote. Whoever gets the most votes will win outright. 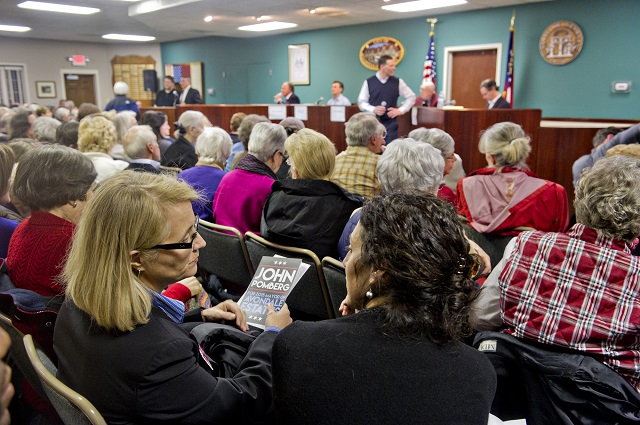 Rep. Karla Drenner (left) talks with Susan Belmonte before the start of the Avondale Estates mayoral candidate forum at city hall on Thursday, February 19, 2015. Photo by Jonathan Phillips. (Editor’s note: Candidates were passing out campaign flyers at this event.)

Decaturish will make no endorsements in the Avondale Estates mayoral race. Our Advertising Director, Jeff Cochran, has offered each candidate the opportunity to purchase advertising. Funds received from our advertisers and subscribers allow us to provide coverage of this race and many other issues that are important to our readers.