Atlanta Public Schools to someone complaining about the weather: ‘It’ll be colder at Harvard’

Atlanta Public Schools to someone complaining about the weather: ‘It’ll be colder at Harvard’ 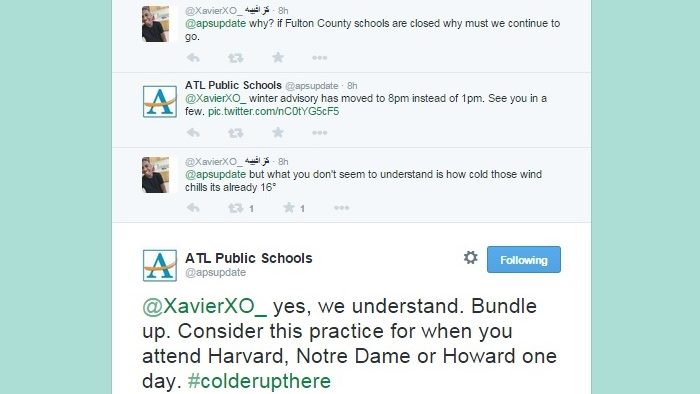 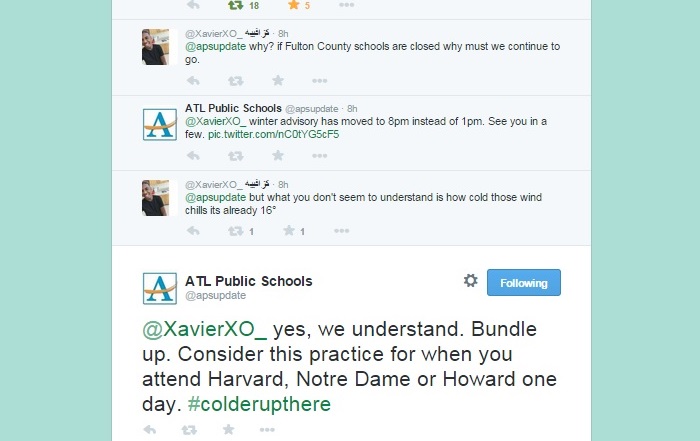 Atlanta Public Schools announced via Twitter (@apsupdate) that schools will be open today, despite the frigid temperatures. A Twitter user, XavierXO, complained.

He asked, “Why? If Fulton County schools are closed why must we continue to go?”

APS replied, “Winter advisory has moved to 8 pm instead of 1 pm. See you in a few.”

“But what you don’t seem to understand,” he said, “Is how cold those wind chills its already 16°.”

APS had an answer for that, too.

“Yes, we understand,” APS said. “Bundle up. Consider this practice for when you attend Harvard, Notre Dame or Howard one day. #colderupthere.”

While the response got some positive nods from Twitter users, other people weren’t happy.

Decaturish asked APS if this is part of a new social media strategy. We’ll update this story when APS responds.