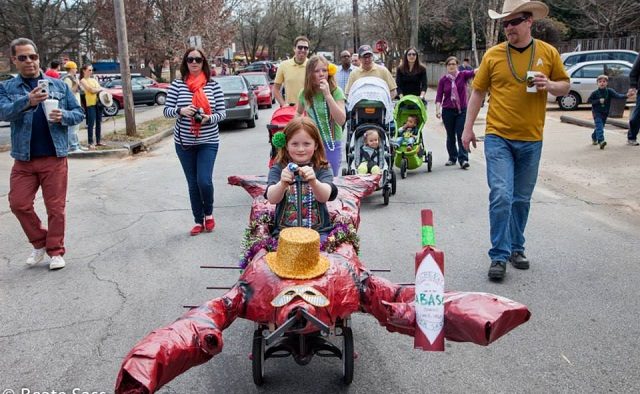 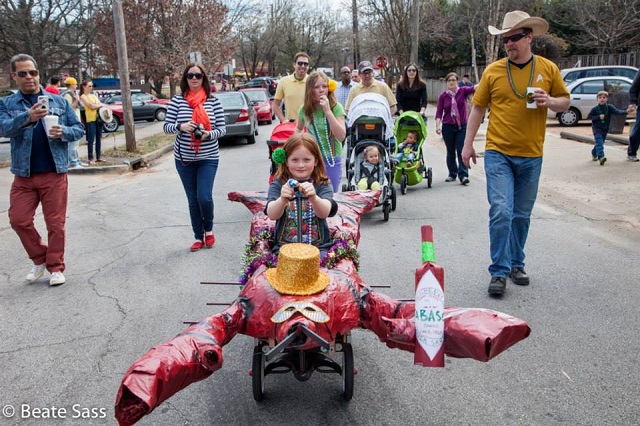 Get ready to catch some beads.

The preparation starts at the 4/5 Academy on Oakview Road at 1 pm.

The parade begins at 2 pm and the route is Oakview to Mead Road to The Imperial, at the corner of Mead and West College.

“The Imperial will feature a special menu of red beans and rice, chicken and sausage gumbo and jambalaya,” a press release about the event says. “Proceeds from food and beer sales will be donated to support Decatur Education Foundation music grants for the Decatur City Schools.”

Oakhurst’s Mardi Gras has been going on for 10 years, organizer Emily Berg said.

Berg said, “It all began in 2005 when our oldest son began kindergarten.  That huge moment in Billy’s life sounded alarm bells for me, as I realized that for the first time since the 1980’s I wouldn’t be trekking to New Orleans to celebrate my high holiday. So in the interest of familial harmony, my husband suggested starting our own parade for the kids.  David built a papier mache float on top of the radio flyer wagon.  Billy, his brother Tommy and their friends painted the float.”

The parade has been rolling along ever since.

Correction: An earlier version of this story misspelled Mardi Gras. This story has been updated with the correct spelling.