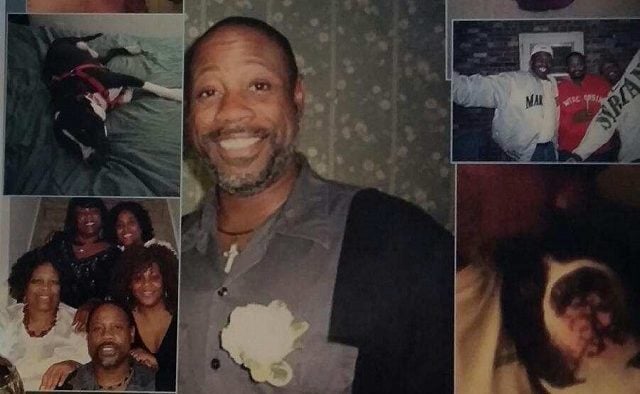 A photo of a memory wall for Kevin Davis. Photo provided by his coworkers at Sawicki's in Decatur.
Share 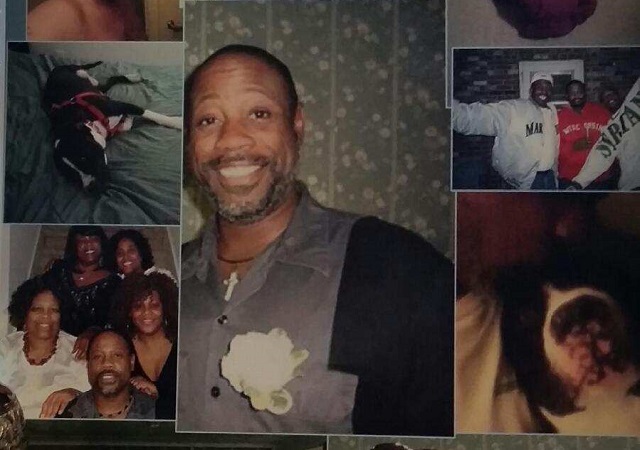 A photo of a memory wall for Kevin Davis. Photo provided by his coworkers at Sawicki’s in Decatur.

Mark Scarbrough, the general manager of Decatur Bikes, had a dream about Kevin Davis the other night.

Davis died on Dec. 31, cuffed to a hospital bed at Grady Hospital. He lingered there for two days after a DeKalb Police officer shot him.

But in Scarbrough’s dream, Davis was very much alive and playing golf, something Davis did not do.

Scarbrough said he was, “Smiling as always.”

Coworkers and colleagues who knew Davis have struggled with the details how he died. Davis worked at Sawicki’s in downtown Decatur for two years and rode his bike to work. He built it using recycled parts he obtained from Decatur Bikes.

He isn’t the same person described in the police reports, his friends said.

DeKalb Police said that the officer shot Davis because he wouldn’t drop a black revolver he was holding. Davis was in custody in the hospital because had police charged him with aggravated assault. Since Davis died, family members and community activists have pushed for answers. The Police Department has formally asked for a GBI investigation into the matter. The Davis story became linked with the larger narrative about the deaths of black men at the hands of police officers, like Michael Brown in Ferguson, Mo. and Eric Garner in New York.

That’s the Kevin Davis most people know, a man whose death has raised many open-ended questions about his actions and the actions of the officer who killed him. He’s been swept up in the politics of the moment.

His boss, Lynne Sawicki, said Davis never took a political stance or a confrontational tone. She thinks Davis would’ve been wary of all the attention.

“I don’t think he would want any part of it really,” she said. “He was a really mild mannered guy. He stayed to himself and didn’t want trouble.”

The crew of the sandwich shop on West Ponce de Leon became like a second family to Davis. Lynne Sawicki said she got onto him about his diet, saying he struggled with diabetes. The bike was part of a health regimen. He rode it daily to and from work and his apartment at 100 Pinetree Circle.

“We got him a bike put together out of the remnants from the bike shop. They put pieces out to throw away,” Sawicki said. “He fixed himself up a bike and started riding his bike to work every day just trying to keep himself healthy and happy. Once he fixed his own bike, he started fixing other bikes in the apartment complex.”

His co-worker, Trevor Bryant, loaned him the tools.

“He was always giving the bikes to the kids in his neighborhood,” Bryant said.

Bryant and Davis would have soup cook-offs in the kitchen. Sometimes, when Davis was cooking at home, he’d call Bryant for advice.

“What we make in here is kind of farm and table,” Bryant said. “I was trying to teach him to get away from the bar cuisine.”

Davis took pity on others. Bryant said he sometimes used tip money to buy prescription drugs for a man with one arm who dropped by the store. He once looked after the children of his neighbors when she was sick.

“He’s the kind of guy that doesn’t frown. He was always smiling,” Bryant said. “He kept the customers coming in. He was very talkative. Very personable.”

“He never called in sick, and he had a lot of medical issues that would’ve kept people home, but he loved it here,” she said. “He told me he loved it here, it was his favorite thing to do is come here and work, and you could tell. He really cared. He cared a lot about people, too.”

A few days after Davis’ girlfriend, April Edwards, called Sawicki to say he was in the hospital and wouldn’t be coming to work, he was gone. The suddenness of it stunned the people that knew him. They never had a chance to say goodbye.

There’s some dispute about whether officers denied the Davis family access to him while he was at Grady.

Sydney Huggins, another co-worker, said she’s troubled knowing that Davis died without anyone who cared about him in the room.

“There wasn’t necessarily good closure,” Huggins said. “That to me is the hardest part of the whole situation, knowing that nobody got to comfort him or see him.”

Sawicki and other co-workers shy away from the controversy over what happened to Davis. They weren’t there. All they have to go by is their memories of their friend.

The police officer said he acted in self defense, but his friends never saw Davis say an angry word to anyone.

Bryant, who is married to a black woman, said the concerns raised by the Davis case hit a little closer to home. Like Sawicki, he is reluctant to assign blame.

“Information that we’ve gotten from several different parties is just not lined up,” Bryan said. “That’s one thing I will say.”

“I don’t think we’ll ever have the full story, because it sounds to me like it’s the police officer’s word against … Kevin and he’s gone,” Scarbrough said. “It did not seem to be in his nature to do something like that.”

Huggins asked Decaturish to write this article. She read a media reports and was worried those articles would be the only thing people remembered about her friend.

The Sawicki’s crew held a memorial service for Davis on Jan. 12. Lynne Sawicki made sure it was stocked with all the things Davis liked to eat, the “crappy food” she encouraged him to avoid.

“I love Kevin to death and I miss him every day,” Sawicki said. “I really do. He brought something to this store it’s going to be hard to replace, if I can ever replace it.”