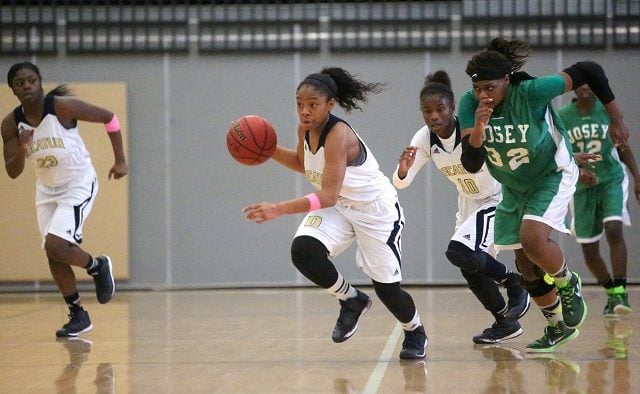 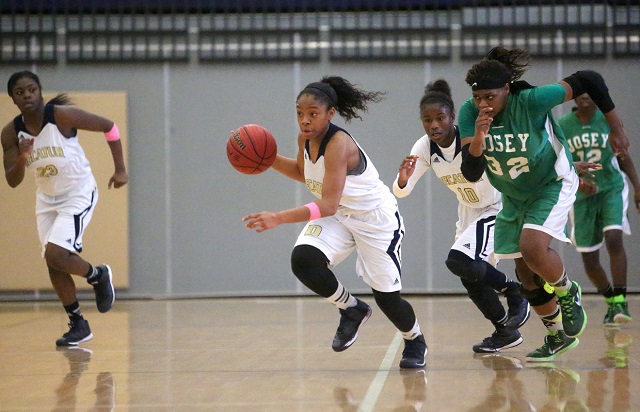 It took Decatur girls basketball team 18 minutes to shake off their lethargy before cruising to a routine, if often erratic, 53-36 victory over Josey on Tuesday.

With the win, the Lady Bulldogs clinched the first round of the state playoffs. One can forgive them for still riding the crest of Saturday’s decisive region-championship victory over South Atlanta.

Only junior post Janay Williams showed up wearing her hard hat, turning in a singularly powerful performance with 29 points and nine rebounds. Williams, it seemed, grabbed nearly every loose ball, and if they weren’t loose she grabbed them anyway.

“I can’t say enough about Janay,” said Decatur’s first-year coach Sarah Coleman. “She’s been incredible these last four or five games. She owns the block, and she’s displaying a physicality and strength that’s unteachable. I wish I could take credit, but I can’t.”

They next face Ringgold Saturday at the Decatur High Arena. Tipoff is scheduled for 6 pm. Ringgold outlasted Callaway 54-39 Tuesday night.

Decatur never trailed, but when Josey’s Breanna Wilson hit a free throw with 6:08 left in the third quarter, the lead was only 22-18. The Bulldogs settled for jump shot after jump shot, with point guard and leading scorer Jayla Morrow making four of 24 shots while forward Kayla Thomas made only three of 18—a combined 17 percent shooting from Decatur’s two leading scorers. On top of that, Decatur missed 14 of its first 15 free throws.

“We talked a lot about it at halftime,” Coleman said, “about how we weren’t distributing, and we weren’t pounding it inside. We also talked about how our energy was real low.”

Coleman made a critical adjustment, switching from a languid 1-2-2 full court zone press to a full-court man-to-man press. That injected some much-need caffeine. Decatur rattled off 12 straight points over a two-minute stretch midway through the third quarter.

From here on there was little suspense, with Decatur eventually opening up a 23-point lead.

“I’m hoping that first half opened our eyes,” Janay Williams said. “One thing I try to do, I try to get focused starting in warmups, and even before warmups, and to not let up. It’s that time of the season. From here on, if we lose, we go home.”

The game game against Ringgold has been rescheduled from Friday to Saturday, Feb. 21, due to the threat of winter weather.