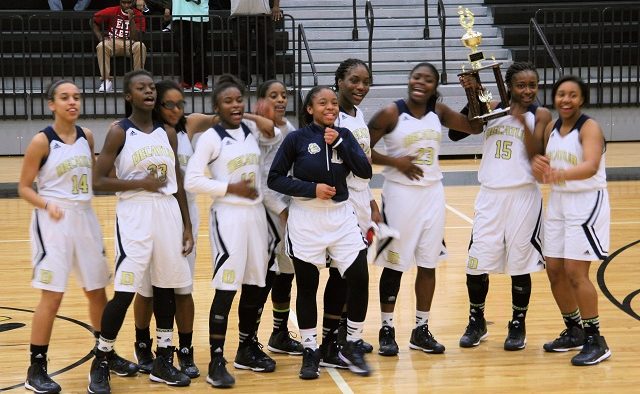 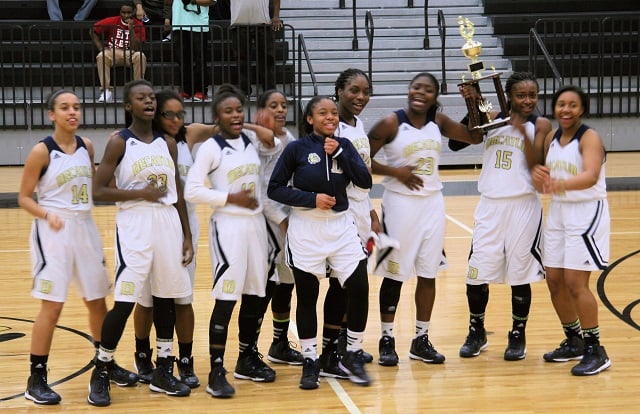 The region title is the girls’ first since Bill Clinton was president. Decatur won its only state championship in 1972, led by legendary player Pearl Worrell and coached by Dennis Green, who later won “several region championships in the late 1970s and early 1980s,” according to longtime Decatur High teacher and former girls coach Chris Billingsley. The Lady Dogs, Billingsley said, also won two region championships in the 1990s, “possibly 1993 and 1997.”

The Bulldogs now host the first two rounds of the state tournament, beginning Tuesday against Augusta’s Josey High, the fourth seed out of Region 3. Game time has been changed to 4 pm at the Decatur High Arena. With a Tuesday victory Decatur would play the Callaway-Ringgold winner Friday, also at the arena.

Decatur (26-2) will need to win five straight games to capture a state championship. The third round, or Elite Eight game, is Feb. 24 or 25, and that conceivably could be another home date (Decatur last went to the Elite Eight in 2013 under current girls and boys assistant Bill Roberts, and before that in 2002 under Kerri Williams). The state semi-final is Feb. 28 at Columbus State, and the state championship is March 7 at the Macon Centerplex.

All this is pretty heady stuff for a program that not so long ago, in 2006-07, was winless, and only managed four victories the year after that.

First-year Coach Sarah Coleman installed the 2-1-2, or what she calls a “junk press,” on Friday, the day before the game. There’s nothing fancy here. The press allowed Decatur’s three best defenders, Jayla Morrow, Jahmee Reeves and Kayla Thomas to freelance, almost like a football free safety, to maintain ball pressure while sniffing around for a long or soft pass to pick off.

The result was 10 team steals—four by Reeves—but most important it kept high-scoring South Atlanta, now 27-1, from running its controlled fast break and posting up on either block. Indeed, South Atlanta never led, drawing to within 16-14 with 5:43 left in the first half before Decatur methodically and efficiently pulled away.

Morrow led all scorers with 21 points, while Thomas had 18 points and 10 rebounds and Janay Williams had 10 points and a whopping 20 rebounds.  South Atlanta was led by Kierra Johnson-Graham’s 18 points.

Williams and Morrow were named to the All-Region team, with Decatur outscoring opponents 211-140 in the three region games. Thomas, meantime, was awarded Player of the Game in the championship.

Correction: An earlier version of this story incorrectly stated that Decatur’s girls have never won a region championship. The story has been updated with anecdotal clarifications from former Coach Chris Billingsley, with actual records difficult or impossible to track down.