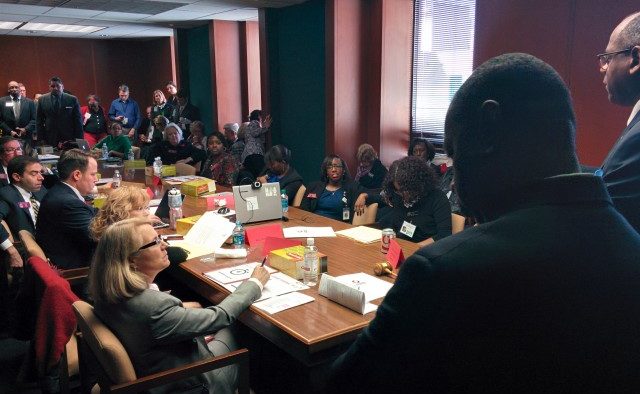 Members of the DeKalb County legislative delegation had lunch together on Monday, Feb. 23. Photo by Dan Whisenhunt
Share 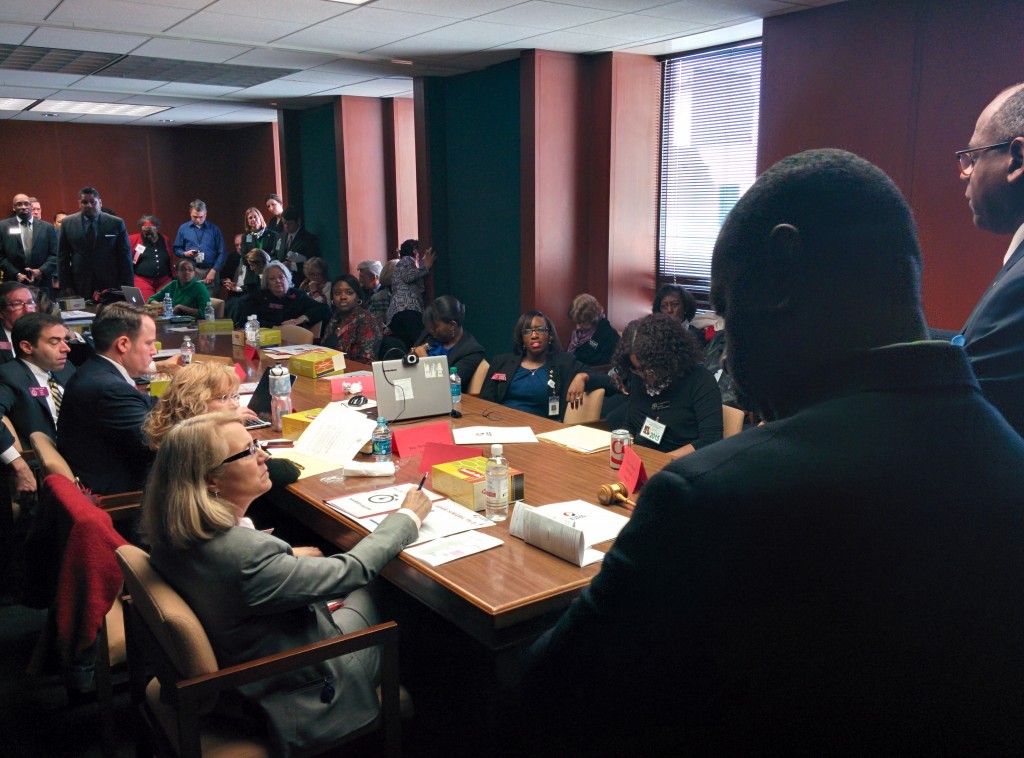 Members of the DeKalb County legislative delegation had lunch together on Monday, Feb. 23. Photo by Dan Whisenhunt

The DeKalb County legislative delegation had lunch together Monday and adopted rules for introducing local bills that could put an end to an effort to expand the borders of Atlanta.

Under the rules adopted by the delegation, one representative could hold up an annexation proposal, like the one being promoted by Together in Atlanta. That proposal would grow Atlanta’s municipal boundaries to include Druid Hills, including Emory and the Centers for Disease Control.

The delegation members who voted for the rules on Monday said nothing has changed. They said rules have always stipulated that any annexation bill needs the signatures of all representatives of the areas affected by the annexation proposal.

But state Rep. Mary Margaret Oliver, D-Decatur, who was the lone “no” vote said those rules have been applied inconsistently in the past.

“This weakens cities and increases county interests,” Oliver said, explaining why she voted against the rules in committee.

Here’s how this arcane bit of procedure could scuttle the Atlanta annexation plan:

Together in Atlanta’s map is drawn around attendance zones for Briar Vista and Fernbank Elementary Schools. Both are in House District 83, represented by Rep. Howard Mosby, D-Atlanta. However, Emory University and the CDC, as well as Druid Hills High School, are in District 82, represented by Oliver.

This wasn’t talked about much during the luncheon, but it was clear the Atlanta annexation was the subtext behind the debate over delegation rules, based on interviews with legislators after the meeting.

Mosby asked for clarification about the rules being adopted during the luncheon at the Capitol.

“I was assuming that was already in there,” he told Oliver during the meeting. “You say in the past we handled that inconsistently.”

After the meeting, Mosby reiterated that nothing had changed.

“There were a couple of instances in the past … where we didn’t actually follow that process,” Mosby said. “Every city, had some representative’s district in it. So the way our rules read, if that city had some legislation they wanted to pass, only the representatives who represented the district that went through that city had to vote on it. The rest of the delegation would pass it ceremoniously.

But a copy of the rules Decaturish saw at the meeting says that in addition to a simple majority, meaning the signatures of nine of 16 house members, annexation bills “shall include the signatures of all members who represent the areas concerned.” 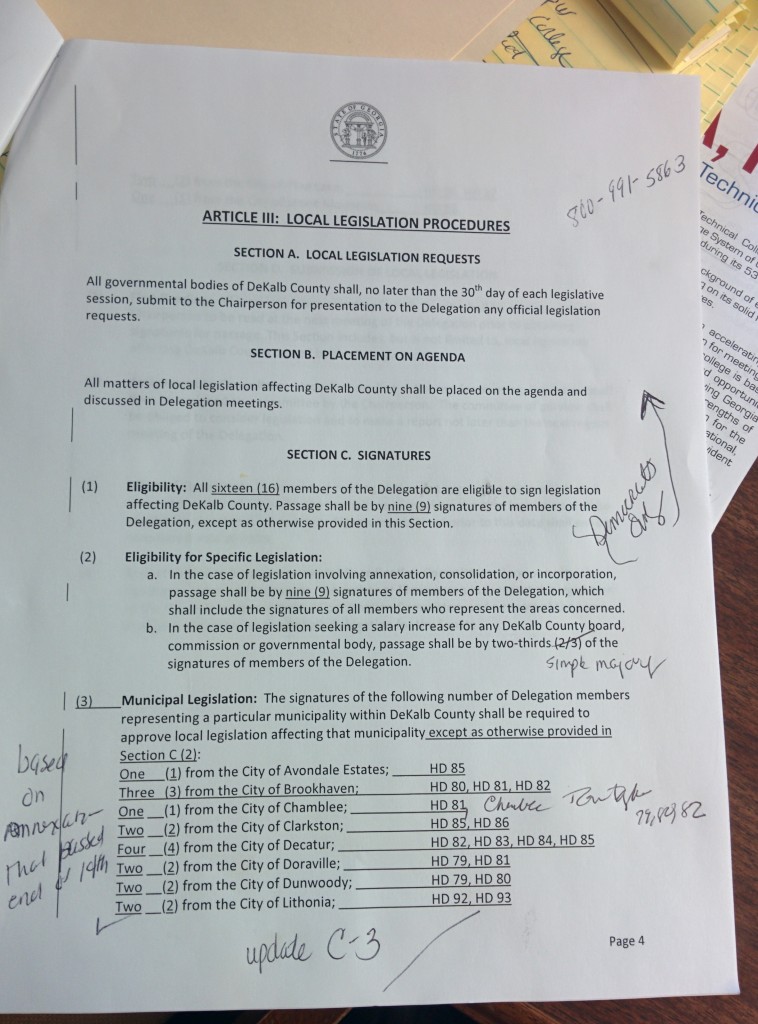 A copy of the rules handed out during Monday’s luncheon. Click to enlarge.

Even the members who voted for the rules weren’t quite sure there was a difference.

State Rep. Karla Drenner, D-Avondale Estates, said, “I compared, while we were sitting there, 2013 rules to 2015 rules, and they were the same. They were the exact same. Mary Margaret was saying the interpretation of the rules would be changed. I was a little confused, quite frankly.”

The annexation discussion is occurring at the same time that the legislature is being asked to introduce legislation to create new cities. The discussion that happened Monday is an echo of a conversation that happened regarding two of those proposed cities: Tucker and LaVista Hills.

Whereas annexation would take areas that currently are unincorporated, meaning they aren’t in any city, and add them to existing cities like Atlanta and Decatur, the cityhood bills would create new cities out of unincorporated areas.

Last year, the maps for Tucker and LaVista Hills were in conflict. Both Rep. Oliver and Rep. Mosby sat on a special panel created to settle the boundary dispute. Mosby was the only member of that committee who voted “no,” saying the panel’s work set a “dangerous precedent.”

As it so happened, Betty Willis, Senior Associate Vice President for Government & Community Affairs for Emory, gave a presentation at Monday’s luncheon. Representatives asked her where Emory stood on the issue of annexation and new cities. She said Emory is officially neutral.

“We have employees who want every option you can think of,” she said. “Our problem is we want our campus to remain intact.”

Currently, the LaVista Hills map is in conflict with a portion of the Together in Atlanta map. Emory is only in the TIA proposal, however.

Willis said that it is.

“We really don’t want to be a part of a new city,” she said.