Family searches for answers a month after DeKalb Police shooting

Family searches for answers a month after DeKalb Police shooting

A memorial for Kevin Davis outside the DeKalb County Courthouse. Photo by Dan Whisenhunt
Share

A memorial for Kevin Davis outside the DeKalb County Courthouse. Photo by Dan Whisenhunt

Kevin Davis’ family says he didn’t deserve what happened to him.

On Dec. 29 Davis, who worked at Sawicki’s in downtown Decatur according to Creative Loafing, was shot by a DeKalb County Police Officer responding to a 911 call. Davis had a gun at the time, but the circumstances surrounding his death are far from clear cut.

He died on Dec. 31 in Grady Hospital. His family says he was handcuffed to his hospital bed and not allowed to see his loved ones. They gathered at the DeKalb County Courthouse on Feb. 4, on what would have been Davis’ 45th birthday, for a protest and called for a Georgia Bureau of Investigations inquiry into the matter.

“He didn’t deserve what he got and I miss him every day,” his sister DeLisa said. “I want the GBI to open an investigation into the death of my brother.”

DeKalb County Police told Decaturish that they have informed the family that once the Police Department’s and District Attorney’s investigations are complete, they would ask the GBI to look into it if the family requests it.

According to a report filed by the backup officer says the officer arrived at Davis’ apartment at 100 Pinetree Circle and found a bloody, chaotic scene. When he came into the building, he heard the responding officer yell “drop the weapon.”

He found the first officer at the top of the stairs and Davis sitting on the ground in the doorway of his apartment. He was holding his chest saying, “I’ve been shot and can’t feel my legs.” Davis’ girlfriend, April Edwards, was shirtless and standing over him, crying. The responding officer told him there was a gun nearby. The backup officer saw a black revolver with a wood handle to the left of the entrance of the door.

Davis’ three-legged dog, Tooter, had also been shot dead by the officer, according to the police report and the account provided by family members.

Edwards explained she had gotten into an argument with her roommate, Terrance Hilyard. Both of them pulled knives out of the kitchen drawer, and Hilyard allegedly stabbed Edwards in the arm, which prompted the 911 call that brought police officers to their apartment.

It’s not clear from the report what officers charged Davis with. Creative Loafing reports he was charged with aggravated assault while he was at Grady.

The vigil for Davis linked his death to the shootings of other black men by police officer, like the cases of Michael Brown and Eric Garner. The protest ended with a camp out on the courthouse steps, with activists promising to be there when DeKalb County employees, prosecutors and judges arrive for work on Feb. 5. 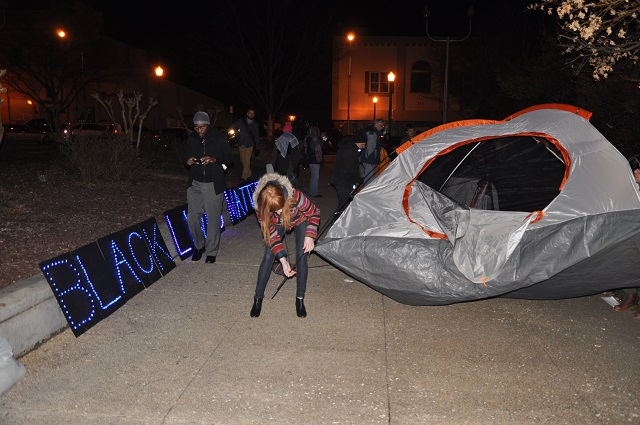 Activists set up tents outside the DeKalb County Courthouse. Photo by Dan Whisenhunt