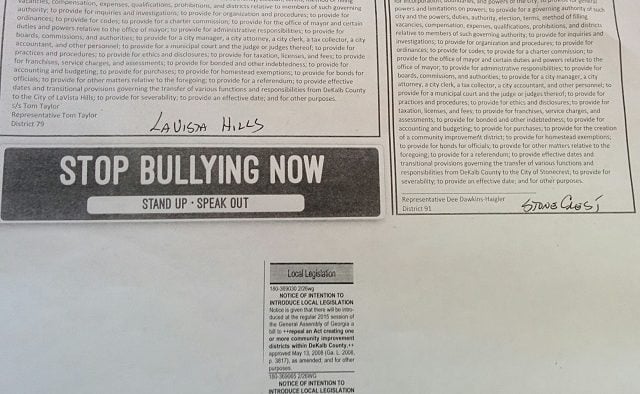 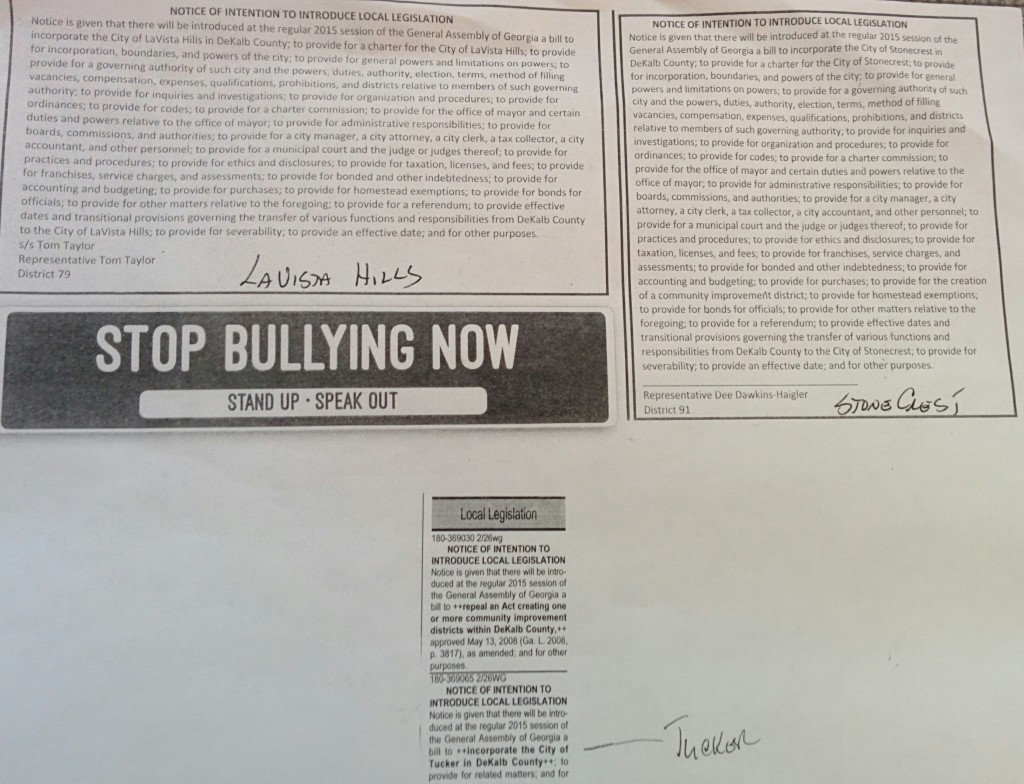 The legal notices do not give a time frame for introduction of the bills, but they would have to be introduced by crossover day, which is March 13.

Earlier this week, DeKalb Strong, a group opposed to the current cityhood process, told its membership that state Rep. Tom Taylor, R-Dunwoody, would introduce the LaVista Hills bill. Taylor’s district does not include the proposed map of LaVista Hills. That area is represented by state Rep. Scott Holcomb, D-Atlanta.

Decaturish has left messages with Taylor and Holcomb seeking comment. This story will be updated when they respond.

The Tucker legislation does not list a sponsor, but it is widely expected to be State Rep. Billy Mitchell, D-Stone Mountain. Jason Lary, with the city of Stonecrest, said state Rep. Dar’shun Kendrick, D-Lithonia, and state Rep. Tonya Anderson, D-Lithonia, will be the cosponsors of that cityhood bill, but the listed sponsor in the legal notice is State Rep. Dee Dawkins-Haigler, D-Lithonia.

“I did talk to him last week and he said he hadn’t decided yet, but he was getting a lot of pressure,” Drenner said.

“People up in that area,” Drenner said. “People from the northern part of the county.”

Why would people in the northern part of DeKalb County care about LaVista Hills cityhood?

State Rep. Dar’shun Kendrick, D-Lithonia, said she couldn’t comment on the LaVista Hills bill, saying she was focused on the Stonecrest legislation. She said the bill’s chances are good, primarily because there’s no competition between the current cityhood movements.

“We have not seen the infighting that we saw last year between cities,” she said. Kendrick is referring to the conflicts between a proposed city of Tucker and the maps for Briarcliff and Lakeside. Lakeside and Briarcliff combined to form the LaVista Hills cityhood movement.

Lary, with the city of Stonecrest movement, likes the bill’s chances this year.

Attempts to reach other members of the DeKalb delegation for comment have so far been unsuccessful.

According to the Decaturish cityhood map, embedded below, there is some overlap between Tucker’s map and Greenhaven. There have been lo legal notices published regarding that cityhood bill, though Greenhaven supporters yesterday announced that they had received some good news. A recently-completed study says the city would be able to generate enough tax revenue to provide services.

It’s unclear whether those differences will be resolved in the map attached to the Tucker cityhood bill. Also, there’s no word on whether LaVista Hills has resolved its conflicts with a proposal from Together in Atlanta, a group seeking to annex the Druid Hills community into Atlanta.

When asked for a response, Allen Venet with LaVista Hills Yes said, “It seems that each week brings more evidence of the problems in DeKalb’s county government. We continue to believe that new cities are an important part of the necessary reforms and we are very hopeful that the Georgia General Assembly will pass a bill allowing residents the right to vote on this question.  These issues have been studied and debated for years, and further delay is not a solution.”

Michelle Penkava of Tucker 2015 said via email that, “Tucker is ready and it’s time to move forward. Our community is excited about taking this important step toward achieving cityhood for Tucker.”

Anne Wallace with Together in Atlanta said she has not seen the LaVista Hills map attached to Taylor’s bill.

“We have had no conversations in 2015 with LaVista Hills regarding our overlapping border,” she said. “We have not seen the map they will submit.”

This is a developing story. Check Decaturish.com for updates.