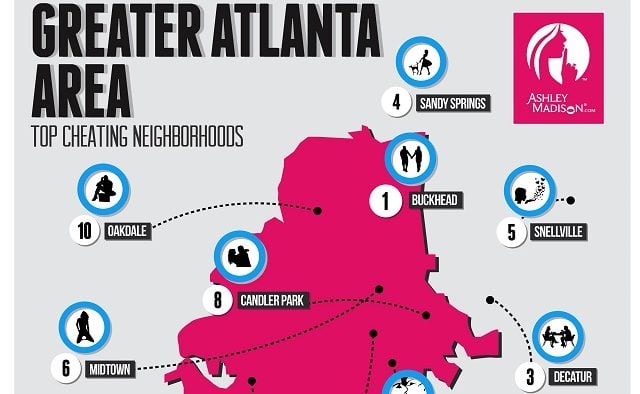 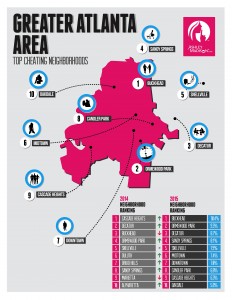 A notorious website that connects married adults looking to have affairs claims that about 1,750 of its users live in the city of Decatur.

AshleyMadison.com claims that Decatur ranks third on its top 10 list of “Atlanta Neighborhoods With the Most Affairs.”

“The proclivity to cheat often goes hand in hand with opportunity,” AshleyMadison.com CEO Noel Biderman said in a press release. “Those with discretionary income and freedom to travel are even more likely to stray.”

Local marriage counselors Decaturish contacted about the ranking said they were surprised. And a couple said they’d never even heard of AshleyMadison.com.

“I am surprised,” marriage counselor Kathy Lucy said. ” … My practice is probably 70 percent couples and the majority of them are in the Decatur area.”

She’s not saying people don’t have affairs. But usually it’s with a coworker, friend or neighbor.

“I just don’t hear a lot about that about people using websites to be unfaithful,” she said. “I hear about couples struggling when pornography is an issue, but not using a website to go outside of the marriage. I just don’t hear that (in my practice). I’m not saying it doesn’t happen.”

Heather Kotler, another local marriage counselor, said she has seen clients who mentioned the website, but she said they’re usually not in treatment because they’ve had an affair.

“Yes, I have seen clients where this website has been a factor, but the clients I have who have gone on websites like that are addicts and it’s part of their sexual addiction,” Kotler said.

AshleyMadison.com provided some other statistical breakdowns of its registered users.

– Cascade Heights subscribers have the most affair partners on average.

– Downtown is the place with the most men looking for an extracurricular relationship.

– Midtown has the most subscribers age 35 and younger.

“The intentionality of going on that website in order to have affairs with married people just seems surprising, especially when there are so many other opportunities to be unfaithful, or to find sexual partners,” Kotler said.

Lucy said there are also plenty people who are in an open relationship, where both partners are OK with having partners outside of marriage.

Lucy said there’s a complexity to relationships that might not be conveyed by AshleyMadison.com’s ranking of neighborhoods by their level of infidelity.

“The issue is the transparency within the couple and what they agree upon,” Lucy said. “‘This is the nature of our relationship and this is what we consider to be faithfulness.’ And a betrayal is when someone is secretly going outside of what the couple has agreed upon.”

Here are the Top 10 Atlanta Neighborhoods With the Most Affairs, according to AshleyMadison.com.