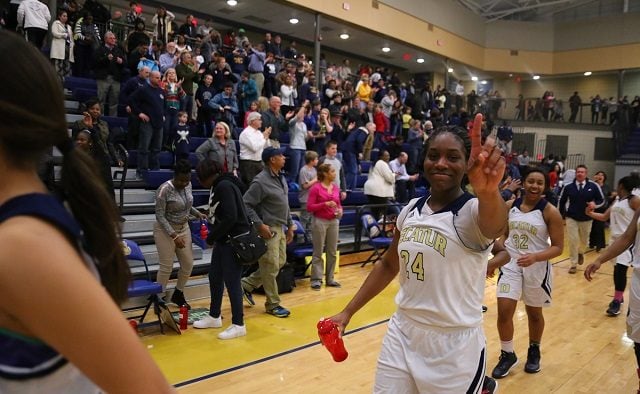 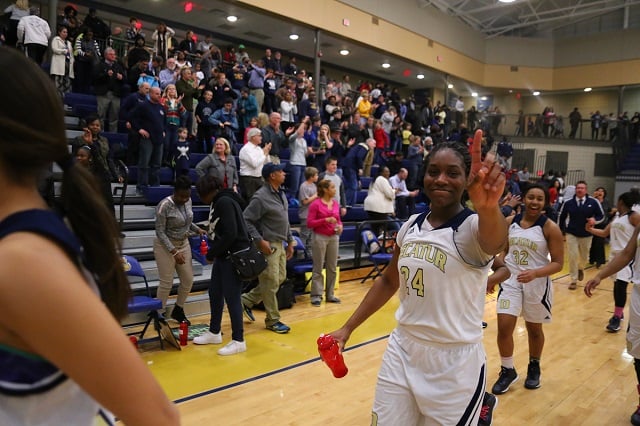 Decatur’s girls rode the broad shoulders of junior post Janay Williams’ 23 points and 22 rebounds and now will keep cruising, straight to Columbus for their first Final Four appearance since 1972.

Playing before the season’s largest crowd at the DHS Arena, third-ranked Decatur beat seventh-ranked Kendrick 64-49 in the Elite Eight round of the AAA state playoffs.

But the night’s joyous, historic significance was tempered by the sudden death of Decatur’s No. 1 fan Doc Fowlkes. Sitting in his usual seat, on the top row behind the Decatur bench, Fowlkes collapsed early in the fourth quarter. He was immediately surrounded by police, emergency medical personnel and a doctor. The game continued, and after about 15 minutes Fowlkes was removed by stretcher.

Assistant Coach Bill Roberts, who drove to the hospital immediately after the game, confirmed Doc’s death.

Doc’s son David Fowlkes played basketball and baseball at DHS from 1971 to 1976, was head baseball coach at West Georgia from 1990 to 2009, and is now on the high school’s Wall of Honor. Another son, Eddie, was a longtime baseball coach at DHS and is the school’s official historian.

“Doc was a huge supporter of Decatur High School and Decatur athletics,” school Principal Noel Maloof said. “He was at every game supporting the kids as long as anybody could remember. It’s going to be a huge loss. Just a great positive spirit in the stands supporting our kids all the time.”

Not surprising, given the two squads’ high level athleticism, Tuesday’s game had a furious ebb and flow, with Decatur reeling off 10 consecutive points three separate occasions, while Kendrick had an 11-point run of its own.

But Decatur (29-2) prevailed, and advances to play second-ranked Laney 3 pm Saturday in the state semifinals at Columbus State. On Tuesday, Laney defeated No. 1 and previously unbeaten Dawson County 70-64.

The game began with a pace so breathless that Kendrick Coach Sterling Hicks substituted three players only 30 seconds into the game. This is the norm for Hicks, whose team averages about 90 shots a game, 71.9 points and full-court presses for all 32 minutes.

But late in the first quarter officials began blowing the whistle on nearly every possession. Eventually refs called 26 fouls against Kendrick and 23 against Decatur, with the two teams combining to shoot a whopping 56 free throws.

Decatur Coach Sarah Coleman adjusted more effectively to the choppy rhythmic tempo that often characterized this game from here on out. With two Decatur starters—leading scorer Jayla Morrow and Taylor Jones—on the bench in foul trouble, and Decatur trailing 23-18, Coleman switched from a straight man defense to a match-up zone with four minutes left until halftime

Forced into playing more of a half-court style—holding the ball for 45 seconds on one possession, for instance, and 30 seconds on another—Kendrick seemed truly baffled by the zone.

“Right then I wanted to stay within five, until we could get Jayla and Taylor back in the game,” Coleman said. “That turned out to be the most critical point in the game.”

Indeed, Decatur ran off 10 straight points and took a 28-23 lead into intermission. Although Kendrick cut it to a 28-27, 45 seconds into the third quarter, it never got any closer. Unable to sprint up and down like normal, unable to consistently assault the basket with point blank layups, Kendrick made only 18 of 82 shots.

And though Kendrick Coach Hicks kept running players in and out, and had 10 players who eventually scored, it was Decatur who appeared the fresher team by game’s end, winning this one going away.

Morrow, who sat for about 14 minutes, and managed only four points, still displayed significant poise with a game-high four assists. Jones overcame foul trouble and picked up her scoring slack with 14 points on 6 of 10 shooting.  Forward Kayla Thomas had a typically brawny performance with 10 points and 13 rebound, as Decatur overall dominated the boards 68-39.

Kendrick (27-3), the defending Class AA champions, was led by Destiny Murph with 11 points and Brittany Thompson with 10.

If Decatur wins this Saturday, it’ll play the championship game March 7 in Macon. Decatur’s only Final Four appearance in 1972 was also its only state championship.

Unlike the last time, the Lady Bulldogs will have to do it this time around without Doc Fowlkes, a Decatur High sports fixture for decades.

Doc even made to almost every summer-league basketball game in recent years. Fowlkes, who raised his family over on South Columbia Drive, goes back to the days when DHS played its home basketball games in the WPA gym that stood on the same site of the current arena.

Lauri McKain, who was the high school’s principal from 2006 to 2014, said Coach Roberts called her to let her know what had happened to Doc.

“We processed it together, Bill and I, on the phone last night,” McKain said. “I’m really sad for the Fowlkes family, but at the same time I feel like he spent his last breath doing exactly what he would want to be doing. A few minutes before he died, he’s fussing about rough calls and just being himself, and I think that’s a blessing. I don’t think anyone ever wants to be in that place where they don’t know who they are anymore and they die in hospice. He left doing what he loves.”