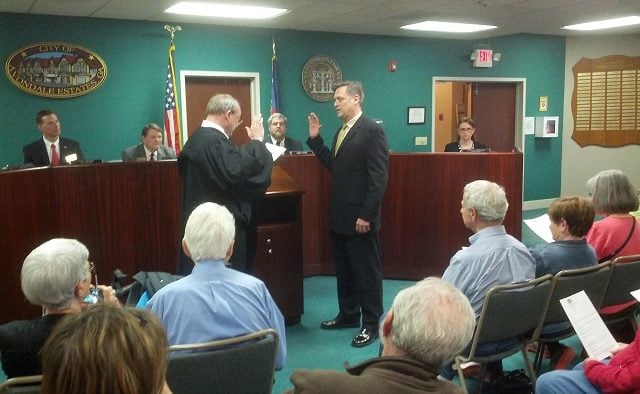 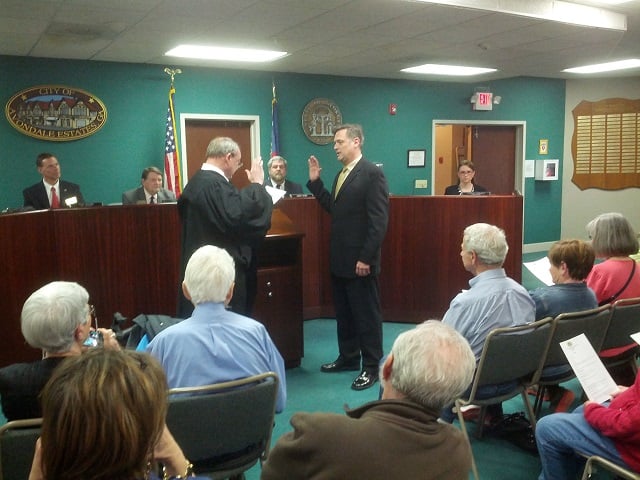 Jonathan Elmore was sworn in as Avondale Estates mayor on Monday, March 23. Photo by Carey O’Neil

Jonathan Elmore took the oath of office as Avondale Estates’ mayor Monday night, kicking off a short eight-month term after a special election the previous week.

“I think we can keep our city great and I look forward to working with all of you,” Elmore said to  a room full of about 30 people from behind a paper name placard after the ceremony. His official city commission placard was still in the mail. “We have way more in common than we don’t.”

Elmore’s wife, parents and three children all smiled and waved to the crowd after the ceremony. The city commissioners then took turns congratulating the new mayor.

Elmore said he plans to hit the ground running, accomplishing as much as he can in the coming months before re-running for a full term that would start next year. While he gets the hang of running meetings, he’ll focus on the city’s ongoing annexation plans and negotiations for a major mixed-use development.

He said he plans to create a committee focused on education in he city. There’s a gap between the DeKalb County School District, the city and the community, he said, and he hopes this committee can help bridge it.

“There’s hardly anyone who’s not concerned about education,” he said. “We need to pull all that power and community together.”