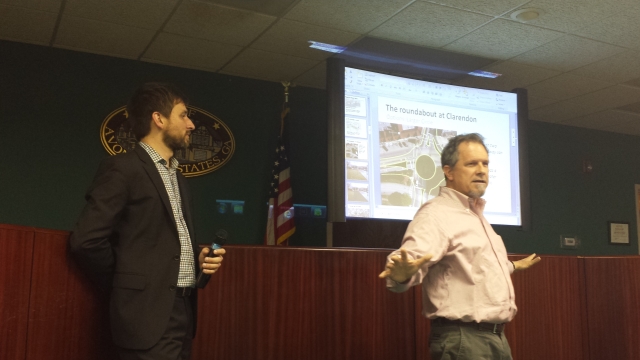 Project planner Joel Mann listens as an Avondale resident explains his thoughts on a proposed roundabout at a meeting Thursday, March 19, 2015. Photo by Dena Mellick

Joel Mann, an associate project planner with Nelson/Nygaard Consulting, discussed the feasibility study and the results of December’s “Build-an-Intersection” day.

Mann said his team and the city obtained important feedback on the project during that demonstration.

“We had some really good discussion. This wasn’t all, ‘we want to see this happen, let’s do it.’ There was concern and there was pushback. We took that into consideration,” said Mann.

The Avondale Estate’s Master Plan, last updated in February 2014, includes recommendations such as a road diet that would convert a five-lane highway into three-lanes. It also suggests pedestrian islands for safer crossings and a roundabout at North Clarendon Avenue and U.S. 278 in order to make downtown more pedestrian friendly.

Mann said his team and the city see some challenges ahead for those projects, based on the recent feasibility study and December demonstration.

The roundabout itself faces some large hurdles. Mann said in order to make a roundabout work in that intersection, it would need to have two circulating lanes in each direction, which would mean the road would have to be five lanes on either side. In addition to cutting into historic park space, Mann said GDOT believes that plan would have an adverse impact on traffic flow.

“That doesn’t mean you can’t do that,” said Mann. “But that adds significant time and cost to the project to go ahead and make that happen. And the general policy with GDOT and ARC [Atlanta Regional Commission] is that they are not willing to fund projects that have adverse impact unless you can demonstrate that this has a unique level of benefit from a traffic and transportation standpoint. It does not.”

He said when they took into account forecasted traffic, a road diet with a roundabout would make the situation worse than what it is currently.

Mann said that although the Master Plan for the city suggested three lanes, because of some accompanying difficulties, he’s also been looking at four lane options. One challenging intersection in both scenarios is the Pine Street North/Avondale Road intersection and the Twin Oaks shopping center. You can see Mann’s comparison of three lanes versus four lanes for that area in his presentation.

Mann also presented findings of delay times during peak hours as a result of the road diet. He said in general, GDOT isn’t inclined to accept lower levels of service on a road project, especially since there is a lack of good alternative routes.

Following the meeting, Decaturish asked Jonathan Elmore, Avondale’s mayor-elect, about his thoughts on the project.

“I have mixed feelings about it,” Elmore said. “We’re a thoroughfare, and it’s a state route. If you can slow people down and they stop at your shops and spend money, okay, that’s great, but in the morning and afternoon, that’s not what people are doing. They’re just trying to get somewhere.”

Residents also expressed concerns. One woman said during the meeting, “I really don’t see the point of this. I think you’re just going to have lots of traffic bottled up all through downtown.” Mann responded, “Fortunately for you, the state agrees with you, and they have a say in this.”

Mann said their research analyzed whether having challenging peak hours of traffic is an acceptable tradeoff for a more pedestrian-safe and attractive street.

It’s not clear what the answer is yet. Mann said next steps include exploring alternatives for pursuing the road diet as well as preparing to formally go through GDOT and applying for funding with the Atlanta Regional Commission.

These questions will also need to be considered in Decatur soon. On Monday, The Decatur City Commission voted yes on four resolutions authorizing applications to the Atlanta Regional Commission for LCI grants. The third resolution in the prioritized list was to continue Avondale’s proposed road diet along U.S. 278 as it turns into East College Avenue in Decatur, narrowing it from four lanes to two.