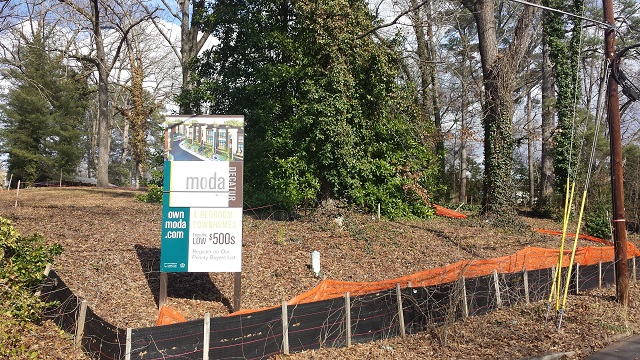 We accept letters to the editor. All letters must be signed and are typically 400 to 800 words in length. We reserve the right to edit letters for length and content. To send your letter to the editor, email it to [email protected]

If you’ve recently driven down Forkner Drive near Church Street in the City of Decatur, you’ve probably seen a billboard on Forkner near the corner advertising new town-homes. The project will include 25, four bedroom townhouses (in the upper $500’s) on three, heavily wooded, former single family residential lots.

This development – by St. Clair Holdings – apparently is the first major application or test of the City’s new tree ordinance.

Aside from the sheer density and height of the townhouses, many neighbors are concerned about the developer’s plan to cut down virtually all the trees on the property and remove as much as 10 feet of soil in a swath well over 60 feet wide by nearly 200 feet long. And that’s just on one side of the proposed development – the north side that adjoins the back yards of at least seven homeowners on Old Decatur Circle.

The soil removal and the construction of a huge retaining wall that will be 6-10 feet tall and less than three feet from the Old Decatur homes’ rear property lines would also destroy or severely damage the root system of at least a dozen mature hardwood trees and numerous smaller trees in Old Decatur back yards.

The City is still reviewing the developer’s plans, but neighbors fear that the development might be approved very shortly. The new Decatur tree ordinance may have little, if any, impact on a final decision — despite wording in the tree ordinance about how Decatur values trees in order to maintain clean air, wildlife, shade, noise buffering, property values, etc

As per the minimum requirements of the tree ordinance, the developer has offered to plant a few, smaller trees for neighbors on Old Decatur Circle whose trees they kill or severely damage with their dirt removal. But they will be required to replace less than half of the trees they take down on the three existing Forkner lots.

Neighbors are puzzled and troubled by the fact that the City tree ordinance – in its first real test – could be ineffective in maintaining tree coverage in the City and protecting neighborhoods from big developments – especially those that so negatively impact individual homeowners and their trees.

Editor’s note: Decaturish reached out to Planning Director Amanda Thompson for comment on this letter. Her response …

“This project is still under review and has not been issued a building permit at this time. … The property is zoned (High Density Single Family), which allows townhouses to be constructed in accordance with all of the city’s other land development regulations. The Old Decatur Circle property is zoned HDSF as well which is why their yards are smaller than a typical detached single family lot.

“This is a complex project that we are still working with the applicant and adjoining property owners to determine the impact on boundary trees. We are taking the time needed to identify those impacts.  We understand that the developers and adjoining residents would like answers quickly, however we must take the time we need to ensure that we are properly interpreting and enforcing the city’s rules and regulations.”