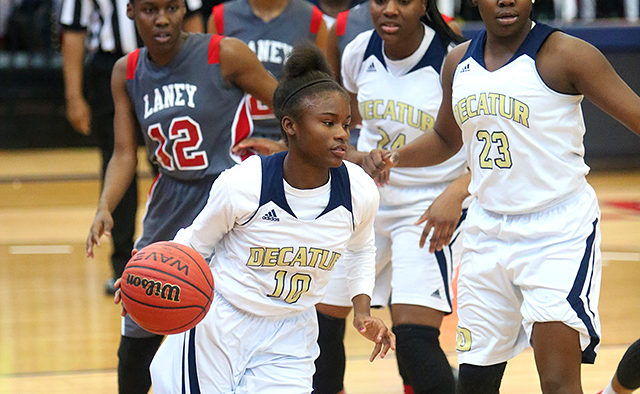 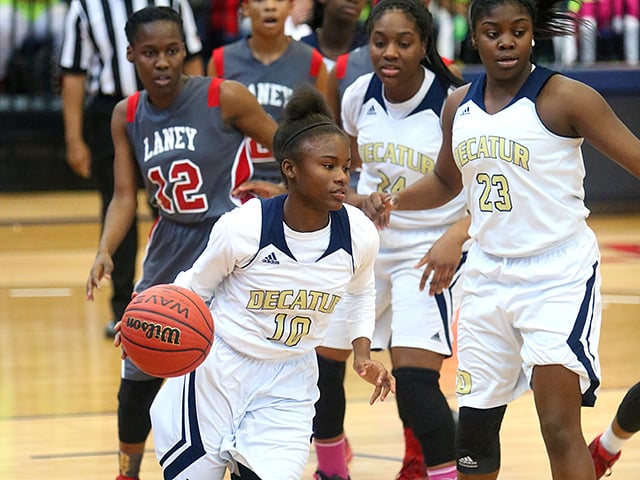 Columbus –The Decatur girls basketball team’s storybook season thoroughly unraveled Saturday afternoon into an aimless narrative of one missed shot after another.

Playing in their first Final Four game in 43 years, Decatur dropped a 63-37 decision to a taller and far more unselfish Laney of Augusta at Columbus State’s Lumpkin Center.

“We had a great season,” said Decatur’s first-year Coach Sarah Coleman. “How can you not be proud of what these girls accomplished? But I think the moment got too big for us. We tried to play too much like individuals and not like a team.”

It’s been characteristic of Decatur to play with something akin to controlled chaos, which can be alternately maddening and thrilling for fans. But on Saturday there was nothing resembling control, though Decatur remarkably stayed in striking distance for the longest time.

Consider the Bulldogs trailed only 6-4 with 2:50 left in the first quarter despite missing 15 of their first seventeen shots. After one quarter Decatur had made only 3 of 25 but was behind by a mere basket, 10-8.

“At that point I’m thinking we’re in pretty good shape,” Coleman said. “I figure we can only shoot better. It can’t get any worse. Right?”

Decatur did lead for the first four minutes of the second quarter, including a 13-10 edge on Jayla Morrow’s two free throws with 6:46 left. When Decatur’s Chyna Eagle put in a missed shot with 3:05 left until halftime it was knotted at 16. But then Laney, with relentless precision reeled off 13 unanswered points to close the half.

That sequence highlighted the difference between these two teams. Three of the five baskets came off fast breaks, and four of them came at the end of a pass. Laney guard/forward Aliyah Collier had 15 points and five assists in leading a balanced Laney attack featuring four girls in double figures.

Decatur, by contrast, had no one in double figures and only four assists as a team.

“I thought [Collier] made their team,” said Jahmee Reeves, Decatur’s only senior among its first seven players. “We’ve played in big games, and we’ve played against good teams. But [Collier] is special. She was the difference between our team and theirs.”

Decatur did score the first five points of the second half to draw within 29-21. But the hammer dropped with 6:30 left in the third quarter when Decatur’s Big Dawg Janay Williams (23 points and 22 rebounds in last Tuesday’s game) left with her fourth foul.

As if on cue, Laney tore loose for a 20-7 blitzkrieg to close the quarter. When both Williams and point guard Jayla Morrow fouled out by the first minute of the fourth quarter, all drama was drained from this one.

Decatur’s three best offensive players Williams, Morrow and Kayla Thomas combined to shoot an almost unfathomable 3 for 50 from the field. As a team, Decatur made only 14.3 percent of their shots (12 of 84), had 23 shots blocked (16 in the first half) and committed 32 turnovers.

It was a dominant performance by a hungry Laney team which has been to 13 previous Final Fours but seeks its first state championship next Saturday against Savannah Beach.

For Decatur the game by no means diminishes a season that saw a record 29 victories (and only three losses), a rare region championship and a much rarer Final Four trip (The Bulldogs also made Final Four appearances in 1955 and 1956). Nobody knows this better than the senior Reeves, whose two older sisters Jabriel and Queen Alford were Decatur stars, but never came close to advancing this deeply into the tournament.

“I’m graduating,” Reeves said, “but for the rest of these girls the story’s not finished. I just now told them in the locker, I’m going to stay on them all summer. I told them they have to come back here next year and get what was taken away from them today.”