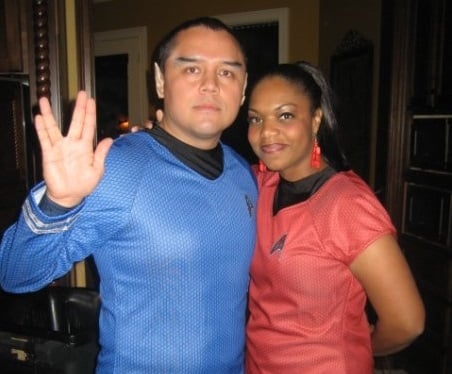 Nicki Salcedo and an unidentified Vulcan.

As I walked through the airport in Washington D.C., a man approached me while making the Vulcan greeting with his hands. This unexpected gesture made me smile, and then laugh.

He stopped in front of me and introduced himself.

“You gave a presentation to my team last month. You mentioned that you loved Mr. Spock in your introduction.”

It was true. I carried a Spock doll with me to business meetings. The entire crew of the Starship Enterprise sat on my desk. Uhura, Scotty, Bones, and Kirk kept me company. On more than one occasion, I’d walk into the cafeteria at work and someone would give me Vulcan greeting.

The correct response is “Peace and long life” or you can say “Live long and prosper” back. I have no problem adding a little science fiction to my professional life. If you know me, then you know I like Spock. Thanks to Gene Rodenberry and the universe he created, there will be other Vulcans. I like any iteration of Spock. But there will only be one Leonard Nimoy.

The first time I went to the IMAX Theater in Boston, the voice of Leonard Nimoy pierced the darkness. It sounded like an old friend. I felt a spine tingling nostalgia and sadness that day. This week was not the first time I’ve cried over Spock.

I wasn’t born a Star Trek fan. I was raised one. I did not get it from my mom or dad. It was a gift from my two older sisters. When kids my age were playing with Barbie and G.I. Joe, I was working on my Starfleet Academy application. As a future science officer on the Enterprise, my sisters knew not to give me baby dolls. They gave me an autographed picture of Nichelle Nichols for my 10th birthday. Because that’s what normal 10-year-old-girls got for their birthday.

My sisters were nerds when being a nerd was an insult. I didn’t know any better. I was raised on a strict diet of “Buck Rogers” and “Battlestar Galactica.” I never choose between “Star Wars” and “Star Trek” because I equally love both.

Even though I was little, my sisters set the precedent that we would see every Star Trek (and Star Wars) movie on opening day. When the “The Wrath of Khan” premiered, my parents took us to go see it. My parents weren’t into Star Trek. Ever. It wasn’t their thing, but they indulged us. Your kids can’t get into too much trouble if their dearest friends live in galaxies far, far away.

In those days movies were a big deal. You couldn’t watch TV and movies on demand or on your phone. You only had one shot at seeing a movies, especially on opening day.

When I was seven years old, I saw “The Wrath of Khan” at Phipps Plaza in Atlanta. We had to wait in line most of the day to get tickets, and then wait again for our showtime. People came prepared with blankets and slept in line. That’s how much we loved Star Trek.

Even though Ricardo Montalbán was the villain, I thought he was beautiful. Even though Spock was supposed to be Kirk’s sidekick, he was always the hero to me. The end of the movie proved I was right: unlikely heroes make the best heroes. I only cried because heroes aren’t supposed to die. I wanted to be a Vulcan that day and so many others. It seemed like a superpower to have self-control and logic in a world with none.

Damn it, Jim, because of Leonard Nimoy, I cried a little bit this week. It must be something about turning 40, because I cry darn near every week these days. I’m not a Vulcan. None of us will ever be. And that’s a shame.

The future isn’t about technology and machines. The past isn’t about dirt floors and manual labor. The future and the past are about people. That’s why I like old Westerns and why I like Star Trek. That’s also why I’ll miss Leonard Nimoy.

Spock made us question our feelings and actions. Why do we resist logic? Why do we love? Spock had the best of both worlds. He was half human and half Vulcan. He would pity us during our mourning and our loss. But he would be reasonable. Sadness is illogical, but it is inevitable.

Many friends consoled me this week, as though I lost a family member. A friend told me, “He is and will always be your friend.” That felt like a Vulcan greeting and goodbye. We had an unlikely hero in Mr. Spock. We had a friend in Mr. Nimoy. Good thing Spock will always be with us.