The neighborhoods of Mason Mill and Medlock are fighting a recent map change by Sen. Fran Millar, SD-40, that puts them in the proposed city of LaVista Hills.

Last week, the Senate State and Local Governmental Operations Committee approved proposals to create the cities of LaVista Hills and Tucker, but with controversial changes to a compromise map that was created last year.

Sen. Millar’s map alteration moved residents of the Livsey precinct from Tucker into LaVista Hills. It also put the Toco Hills retail district and North DeKalb Mall in LaVista Hills. As a result, portions of the neighborhoods of Mason Mill and Medlock were also placed in the city of LaVista Hills map, essentially dividing those respective neighborhoods.

The Senate passed the bills with those changes on Wednesday, allowing for the proposed cities of LaVista Hills and Tucker to move forward, and now they go back to the House.

Mary Hinkel, president of the Mason Mill Civic Association, said the Senate changes caught her completely by surprise, especially since the leaders of the proposed city of LaVista Hills had agreed early on in the cityhood process to take Mason Mill out of the map.

“We have been drawn out of the LaVista Hills map that passed the House. So we had no worries until all of the sudden Sen. Millar changed the map,” said Hinkel.

She explained Mason Mill’s opposition to Sen. Millar’s changes in a press release, saying, “While the Mason Mill and Medlock neighborhoods remained intact in the original House-drawn map, Senator Millar presented a new map to the Senate created by the Legislative and Congressional Reapportionment Office. The office relies on census-block mapping techniques, rather than more up-to-date geographic information software. As a result, in order to draw the commercial areas of Toco Hills and North DeKalb mall into the new LaVista Hills map, the office also had to include the residential properties in the same census blocks, thus splitting the neighborhoods.”

Hinkel said a meeting was set up for Tuesday morning.

“We met with Steve Schultz, a political consultant who has been working on the LaVista Hills cityhood effort. Sen. Millar told Sen. Parent he would make whatever changes Steve Schultz agreed to. Representing Sen. Parent’s office were her Chief of Staff and Becky Evans, her staff assistant working on cityhood/annexation matters. Also in the room were Rep. Oliver’s Chief of Staff and two representatives from the Medlock neighborhood,” said Hinkel.

She said the group had a good meeting and felt it had come to an amicable agreement that would allow the neighborhoods to be removed from the LaVista Hills cityhood plan.

But the situation changed quickly.

“We got an email, I think that evening from Becky Evans, saying that Senator Millar had already put this through the rules committee in the Senate, and I guess it was voted on Wednesday. And Senator Parent tried to put amendments forward, they apparently were voted down … there was heated discussion, and now it’s back in the House,” said Hinkel.

“It’s like everybody is agreeing to this solution, but the system isn’t allowing it,” she said.

Both Mason Mill Civic Association and MANA released a joint statement after Wednesday’s vote, reflecting the frustration over the decision. The statement was included in a post on MANA’s website entitled “Fran Millar wastes everyone’s time; Medlock appeals to House to rectify La Vista Hills boundary”:

In spite of the fact that neighborhood leaders from Mason Mill and Medlock reached boundary agreements with LaVista Hills prior to the Senate’s adoption of HB520 on March 25th, Senator Fran Millar (R-40th district) refused to delay action on the bill, thus splitting two neighborhoods in two for no apparent reason.

In an emailed statement to Decaturish, Sen. Parent said, “I am very pleased that so many different people – from my office, Rep. Oliver’s office, neighborhood associations, and LaVista Hills YES worked so cooperatively together this week to get the right southern border for LaVista Hills. I was very disappointed that those common-sense changes were not made on the Senate floor, though they may yet still occur during the legislative process.”

Mary Kay Woodworth with LaVista Hills YES, the citizen group working to create the city of LaVista Hills, said the organization did not ask for the changes to the map.

Kay said of this week’s negotiations, “For whatever reason, Senator Millar would not accept the amendment. I wish I could tell you why. … We were very, very comfortable with Sen. Parent’s amendments.”

Last week, when Decaturish contacted Sen. Fran Millar to ask about the map changes, he deferred to LaVista Hills’ Steve Schultz to explain the changes to the southern part of the map.

“You’ll have to have Steve Schultz answer exactly what those areas are,” Millar told Decaturish.

When asked why she thought Millar deferred to Schultz on the boundaries and if Schultz was indeed playing a part in the map changes, Woodworth said, “Steve was not alone in making any negotiations or making any decisions. He had that map in front of him that we as a group have gone out in the community for over a year with a combined effort and what those very clear boundaries were and trying to make sure they were maintained.”

Decaturish reached out to Schultz to get a statement, but he did not contact us by publication time. We will update the story if we hear from him.

When asked if she was concerned the last-minute changes to the map could jeopardize the cityhood measure, Woodworth said, “We’re hopeful, we’re optimistic that the parties are still talking, but there’s no guarantee. We would be very very disappointed if now after more than three years of work, we end up back at square one.”

She said a revised feasibility study is on hold until it’s determined what the boundaries of LaVista Hills will actually be.

So what happens next in the legislative process?

“That’s a very good question. We’re not really sure what’s going to happen now. As far as we know, and we’re not involved anymore in this, Sen. Millar, Sen. Parent, Rep. Oliver, Rep. Holcomb, and whoever else is involved are hopefully going to work something out,” said Woodworth.

Hinkel said, “We are calling for a conference committee to be called for on House Bill 520, and that they honor the solutions that we came to on Tuesday and that they do a metes-and-bounds description of this southern boundary.”

Hinkel said Mason Mill’s ultimate goal is to remain in unincorporated DeKalb County. She said the Mason Mill neighborhood does not feel strongly about whether LaVista Hills takes up the Toco Hills commercial area. They just don’t want to go along with it.

“It’s very disheartening to neighborhood civic leaders to be so dismissed by the political process,” Hinkel said.

Here’s a look at various maps of the areas in question. (Note: The first two maps were provided by Rhea Johnson, who is a private citizen who has followed the cityhood process closely. Johnson said the maps were obtained from the county GIS Department. Johnson is not a member of LaVista Hills Yes. Woodworth said she has not seen either of these maps and said, “These are not our product nor do they have our endorsement. We have repeatedly told legislators and media that Mr. Johnson does not speak for or have a leadership role in our organization.”) 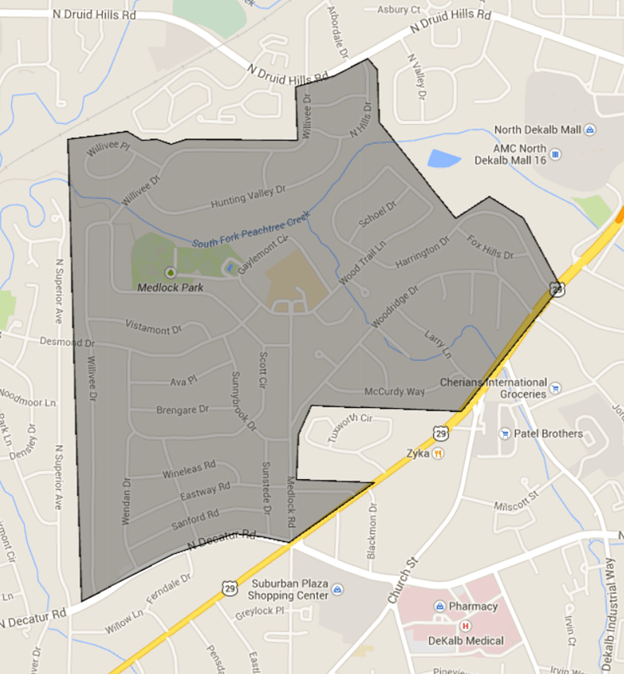