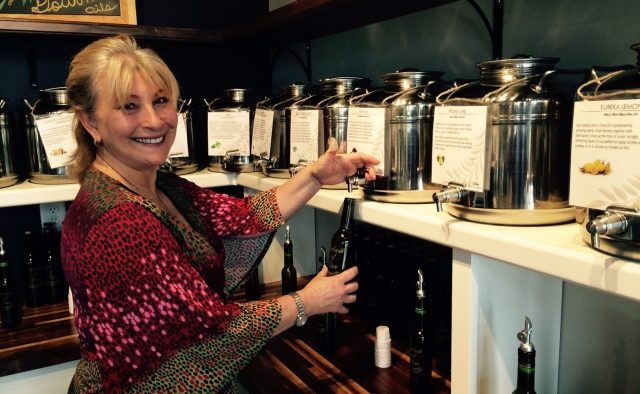 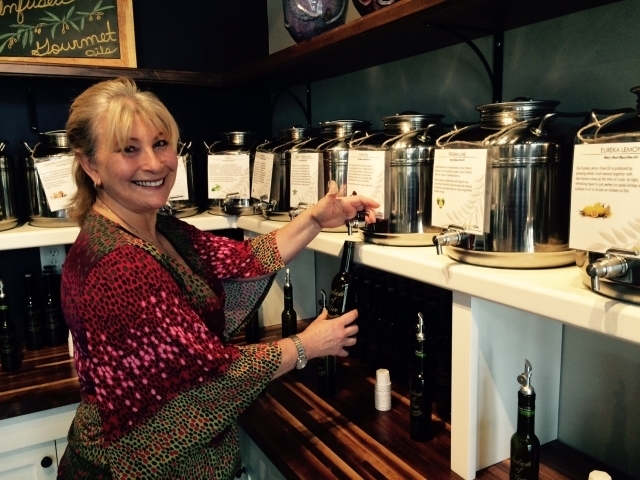 You’ve been to ice cream shops that give you a taste sample to help you make up your mind.

Now folks living in and around Decatur can enjoy a preview when they buy olive oil.

Two olive oil tasting bars have opened – Splash of Olive in the Artisan building in downtown Decatur and Strippaggio in the Emory Point mixed-use development.

They’re part of a growing foodie trend. Five hundred to 1,000 olive oil bars operate nationwide, according to different industry websites, with one listing 16 of these businesses in Georgia.

A growing interest in home cooking, the Food Network, the phenomenon of celebrity chefs, and an appreciation of the health benefits of the Mediterranean diet have fueled the olive oil explosion.

Both Splash of Olive and Strippaggio are small spaces equipped with silver canisters holding olive oil and balsamic vinegars.

Customers pull the tap and pour a small amount of oil or vinegar into a little paper cup for a taste test.

Using bread is discouraged because it interferes with the sensory experience. The owners will help you pair oils and vinegars.

Each canister bears a card explaining the product’s origin and qualities. Some of the oil flavors may surprise you, such as chipotle and blood orange at Splash of Olive and jalapeno and rosemary at Strippaggio.

The prices are steeper than the grocery store.

One difference between the stores: where their products originate.

Splash of Olive sells oils from around the world, including Italy, Tunisia, Peru, and Spain – the world’s biggest producer of olive oil.

Strippaggio, named after the word for the slurping sound an olive oil taster makes, concentrates on American oils.

Celia Tully, the owner, says she buys directly from eight producers in California and two in Georgia.

“I wanted to curate my own products,” she said.

She opened Strippaggio in December 2012 in Emory Point near the CDC buildings. She also sells spices, gourmet salts, and cooking accessories.

Tully has a professional interest in healthy lifestyles as chief marketing officer for Natural Body Spas. She has long been a passionate home cook.

She’s expanding and will open a satellite Strippaggio shop this summer in the central food hall of Ponce City Market, the massive retail-residential complex in the works in Atlanta.