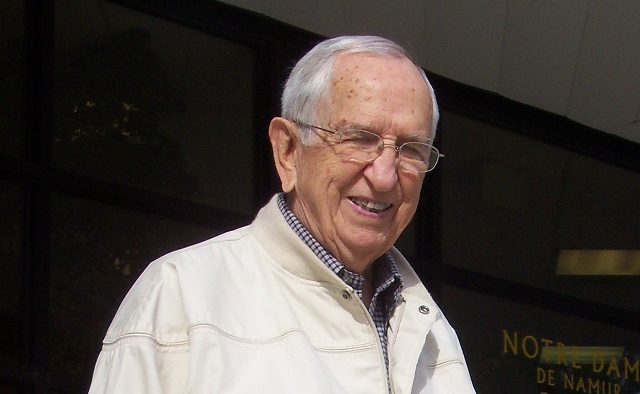 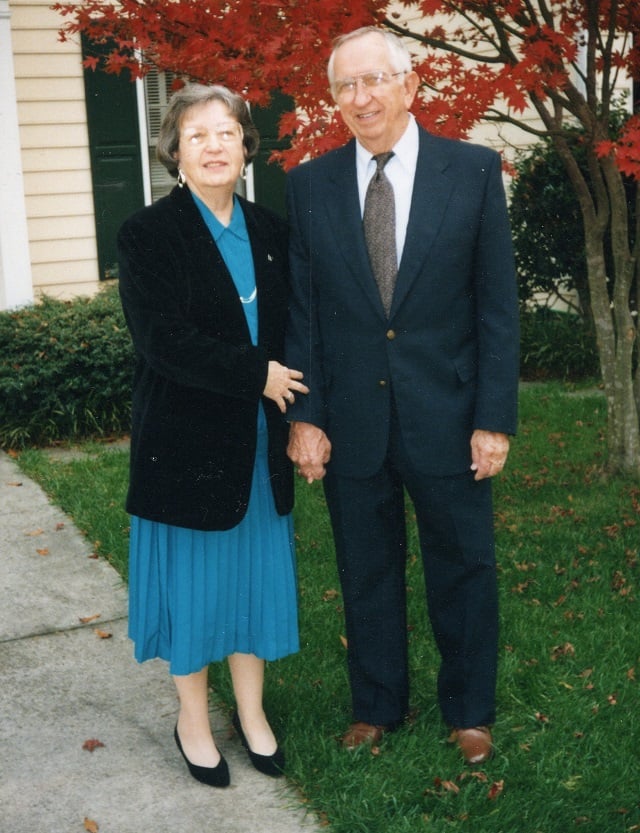 I can’t remember when I first met Doc and Gwen Fowlkes. I’ve been going to Decatur High football and basketball—later softball and baseball—games regularly since the mid-1990s. Somewhere along the way Doc and Gwen were always there, like a couple of exclamation points in the middle of drab paragraph.

Doc approached me one day, who knows when, and said in that booming voice, “How the hell you doing Bill?” I had no idea who he was or how he even knew my name, but that’s how I got to know him.

As most of you probably know by now, Doc died at a Decatur High girls’ basketball game Feb. 24. He was 89 and still robust. The only medications he took were a blood thinner, vitamin B-12 and something for cholesterol. He still drove all the time. He drove, in fact, to the last doctor’s appointment he ever had, back in December, returned home, thumped his chest and told Gwen, “They say I’m perfect.”

I’ve been thinking a lot about Doc lately, and it’s one of those weird ironies that in the last week I’ve learned a whole lot more about him then I ever knew when he was alive. Doc had a full life right until the end, a whole lot of it dedicated to the notion that sports are critical to a thorough, well-rounded education.

He moved his family to Decatur in 1959 and over time became involved with youth baseball leagues at Oakhurst, McKoy, Medlock and Glennwood Hills Parks. With his voluminous personality, however, simply coaching would never be enough, and Doc usually wound up taking over field maintenance and ultimately the entire league.

His own athletic career was modest (“Doc,” by the way, is his real name: Will Doc Fowlkes). He grew up in Dyersburg, Tenn., about 70 miles north of Memphis, and blew out his knee playing high school football. It’s as if the quick-twitch gene skipped a generation. All four of Doc’s sons were superb athletes, and two played in college: David, basketball (though he was drafted professionally in baseball) and Jimmy, baseball.

His dad, Roy “Fitem” Fowlkes played 18 years of minor league baseball before and after World War I. He was on the Boston Red Sox opening-day roster for the first game at old Yankee Stadium in 1923, but hurt his arm in spring training and never appeared in a big league game. His nickname came from his size 13 foot (he stood 6-6). When he found a shoe store carrying his size—not always a given in those days—he’d prop his feet on a stool and say, “Fit ‘em.”

But if Doc’s playing days were limited, he had a richly-textured sports life nevertheless, even if sports were only part of it. He and Gwen had five children, Buddy, Lynne, Eddie, David and Jimmy. He worked in the planning department for the Atlanta Paper Company—later Mead Packaging—from the late 1950’s until taking early retirement in 1983.

The family lived in sprawling home on South Columbia Drive, built in the early 1870s, a place that for nearly 40 years was Doc’s combination tour de force/work in progress.

He always had three home-improvement projects going simultaneously, Gwen said, and mostly they took forever. He’d start a project, leave for the ballpark or a civic meeting, and then maybe pick it up again a couple weeks later.

“One time I slept nine months in the dining room on a pull-out bed,” Gwen told me earlier this week, “because it took Daddy that long to paint the bedroom.”

When Buddy entered Decatur High as eighth grader in 1960, Doc and four other men started the school’s booster club, which survives to this day. Buddy graduated in 1965, DHS’s last all-white class. By the time Lynne graduated in 1969 the school system was reaching its all-time high enrollment of 4,268, a record which stood until this year.

But with integration hitting full stride, white people began leaving Decatur in droves. When Jimmy finished up in 1977 city schools enrollment was barely over 3,000 (it dropped to 2,300 by the early 1990’s).

“A lot of our friends moved out,” Gwen said. “The Oakhurst and McKoy leagues folded. They cut out a bunch of activities at the high school, the dances, the cheerleader uniforms, the pep club—they were so afraid of offending everybody and anybody.”

Doc ran for and won a spot in the city commission in the early 1970’s. Longtime DHS teacher and girls basketball Coach Chris Billingsley remembers that Doc’s “was one of the few voices of reason during that very difficult time,” as downtown was abandoned and boarded up.

Money ran dry for athletics. Gwen stayed up until the wee hours sewing and patching up basketball uniforms so the kids would have something to wear their next game. She, Doc, and sometimes a couple of their older kids would load up several cars to take athletes to road games, or take them home from practice.

“I don’t know,” said Gwen, “It took the community maybe a couple years, maybe longer. But eventually it sunk in that God made everybody of all colors and that integration was gonna work out fine.”

Long after their last child graduated, Doc and Gwen kept going to games and getting to know athletes and people like me who hung around the program.

Most of the sustained conversations I’ve had with Doc and Gwen have come in the last few years during summer-league basketball games at the high school.

Doc and Gwen are both vivid talkers, though different. Gwen is like verbal time machine, circling a topic before leaping a decade or two from one sentence to the next. Doc talked more or less in linear fashion, though with frequent digressions and footnotes to digressions. I wonder sometimes how they ever completed a private conversation.

It was Gwen who finally decided they needed to move from South Columbia to the Ridley-Howard House in 1998. Doc was still scaling the roof in his 70’s, throwing a rope over the house with Gwen securing it at one end, later rappelling down the side like it was Mt. Kilimanjaro.

They kept coming to games though, and up until last year Doc regularly tutored students in math and reading at Renfroe Middle.

On his last day, Doc drove Buddy to physical therapy and later on Gwen to her doctor’s appointment. They left for games early since Doc worried about finding a parking space and Gwen wanted to watch warmups. They always sat in the top row back of Decatur’s bench.

Midway through the fourth quarter that Tuesday night he told Gwen he had a terrible pain in his back and he felt like he was going to pass out.

“He barely said the words,” she said, “before he did pass out. He was gone that fast. Everybody, the doctors and nurses did a great job working on him, both at the game and the hospital. I couldn’t have asked for more. But I know he died immediately.”

A few days later I suddenly thought about summer hoops, a snapshot of memory. After one game a few years ago, Decatur boys coach Charlie Copp—as he always did—had one of the players offer to escort Doc and Gwen to their car. Doc hunched his shoulders in feigned indignation and said, “By gosh, Charlie, I got two good legs and I can walk to my own car.”

As I walked away with him and Gwen, Doc smiled and added, “Two legs, two artificial knees and one hip replaced, but who’s counting?”

A memorial service for Doc is Saturday, March 7, 2 pm at Avondale Pattillo United Methodist Church. Visitation will be in the church narthex at 1 pm, with a reception following the service. 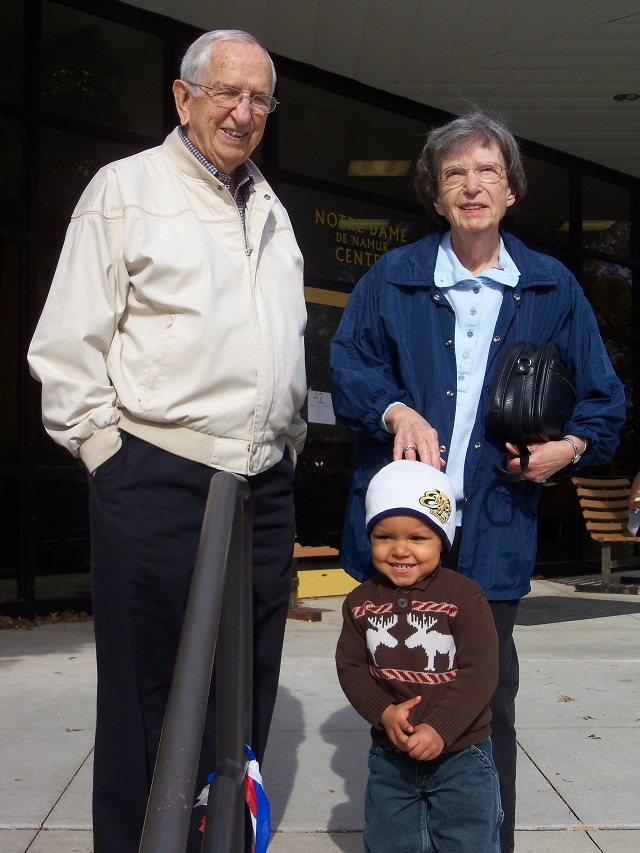 Doc and Gwen Fowlkes. The boy is their grandchild Jacob Fowlkes. Photo provided to Decaturish