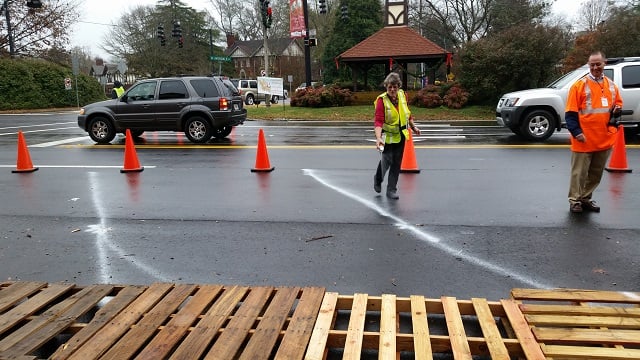 A resident/volunteer uses washable spray paint to draw a parking space during a roundabout demonstration in Avondale Estates, GA on Saturday, December 6, 2014 Photo by Jill Nolin

A planning meeting to look at a road diet for U.S. Route 278 is happening Thursday evening at 6:30 at Avondale Estates’ city hall.

The city said it has been refining a U.S. Route 278 redesign plan since it held Build-An-Intersection Day on December 6, 2014. The city described the plan as aiming “to protect the City’s sense of place while making the corridor more aesthetically pleasing and safer for pedestrians, bicyclists and motorists. The consultant team and City staff will present the concept plan and associated research at a public meeting, with time for public comment.”

Decaturish was at the December live demonstration as teams used flags to show how far a roundabout would cut into Avondale’s park space. As Jill Nolin reported, there were several factors that seemed to indicate challenges with the roundabout idea. However, a feasibility study prepared in February of this year said the two major projects in the works are a roundabout intersection at U.S. 278 and North Clarendon Avenue and the conversion of 278 from a five-lane road to a three-lane road.

According to minutes from Monday’s Decatur City Commission meeting, the commission voted yes on four resolutions authorizing applications to the Atlanta Regional Commission for LCI grants. The third resolution in the prioritized list was to continue Avondale’s proposed road diet along U.S. 278 as it turns into East College Avenue in Decatur, narrowing it from four lanes to two.