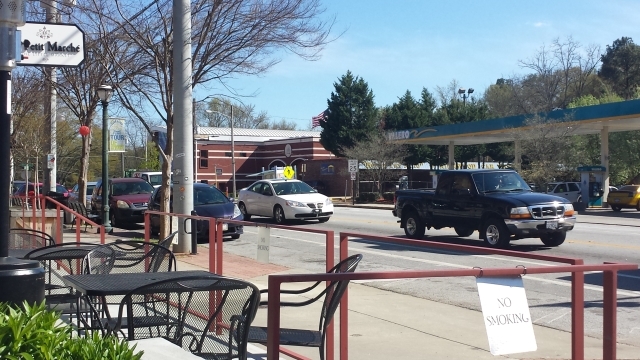 Residents of Kirkwood are working to get an artistic bike rack and an electric vehicle charger installed in front of Le Petit Marché restaurant in downtown Kirkwood. Photo by Dena Mellick
Share

Residents of Kirkwood are working to get an artistic bike rack and an electric vehicle charger installed in front of Le Petit Marché restaurant in downtown Kirkwood. Photo by Dena Mellick

Some big plans are in the works for one street corner in Kirkwood. Residents are working to get an artistic bike rack and an electric vehicle charger installed in front of the popular Le Petit Marché restaurant on Hosea L. Williams Drive.

Carl Holt is overseeing the bike rack project. The Kirkwood resident said he is an avid cyclist and when Kirkwood Neighbors’ Organization President Geoff Mueller proposed the idea of bringing beautifully-designed bike racks to Kirkwood, he wanted to help.

“Kirkwood being bike friendly kind of pre-dates some of the more famous bike communities like Old Fourth Ward, just because they got the beltline in the last three years, but Kirkwood’s been bike friendly for 10 years now,” said Holt.

He said Kirkwood has seen the need for more bike accommodations, as cycling groups take advantage of the restaurants and businesses in downtown Kirkwood.

“There’s a group called the Kirkwood Sunday Ride, and every Sunday they meet at Le Petit Marché and ride out to Stone Mountain, come back, and then eat there. I’ve seen groups of 20 or more. The existing bike facilities that are there really fill up, and then you find them locking them to each other, locking them to the fence around [the] patio,” Holt said.

Holt posted some requests online and got two companies to help out with the project pro bono. Sizemore Group is designing the bike rack, and Steel, LLC, located in Scottdale, will produce it.

“Carl posted a request for help … on Facebook, and I thought here is an opportunity to give back to the community. So we met for coffee and came up with the idea,” said Bill de St. Aubin, CEO of Sizemore Group.

De St. Aubin said the firm had a design meeting to come up with ideas to present to Marchet Sparks, the owner of Le Petit Marché.

Holt shared sketches of the design that Sparks approved: 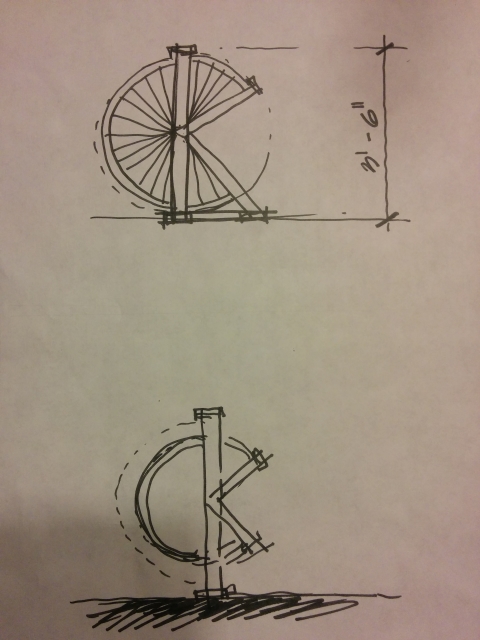 A rendering of the Kirkwood “K” bike rack. Holt said the plan is to have five Ks connected by supports. Design by Sizemore Group.

“It will be the Kirkwood ‘K’ on a vertical post,” said Holt. “Cyclists will be able to secure to the letter, post, or outside arch.”

Holt said there will be five “Ks,” and the rack will accommodate 10 bikes.

He said if all goes well, he thinks Elmyriachi could be the next location for a bike rack. “If we provide more parking for bikes and cyclists don’t have to chain up to the fencing, then they’re going to be more likely to stop there and they’ll remember that in the future when they’re looking for somewhere they can ride to and eat,” said Holt.

Holt is targeting the Kirkwood Wine Stroll, which usually happens in late September, as the deadline for getting the Le Petit Marché bike rack completed and installed.

The Kirkwood Wine Stroll is behind the upcoming installation of an electric vehicle charging station, also in front of Le Petit Marché.

Shane Matteson, treasurer of the Kirkwood Business Owners’ Association (KBOA), and chair of the Kirkwood Wine Stroll, said thanks to a good profit at last year’s wine stroll, KBOA is able to fund installation of a two-vehicle charger.

Matteson considers himself fairly eco-friendly. His job focuses on energy conservation in homes, and he also drives an electric vehicle. Matteson said he believes having an EV charger in downtown Kirkwood makes good business sense and also presents the neighborhood as one concerned about sustainability and the environment.

“I can say as the owner of an electric car, you wind up driving to places with chargers, and the idea is to bring more people to Kirkwood that otherwise wouldn’t be there,” said Matteson.

Matteson said he’s working with Councilwoman Natalyn Archibong to get the spot re-zoned for parking so the chargers can go in soon.

He said the EV charger and the bike rack will “both fit just splendidly” in front of the restaurant.