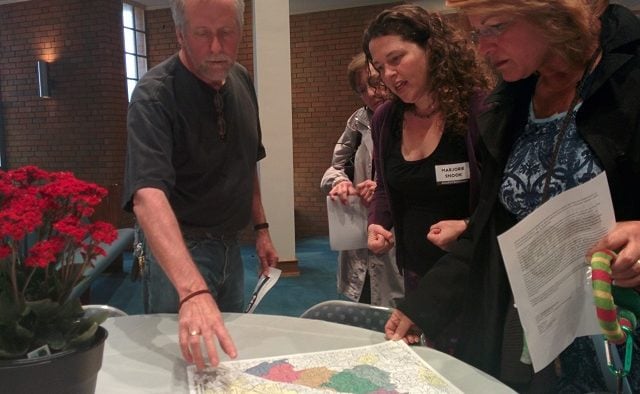 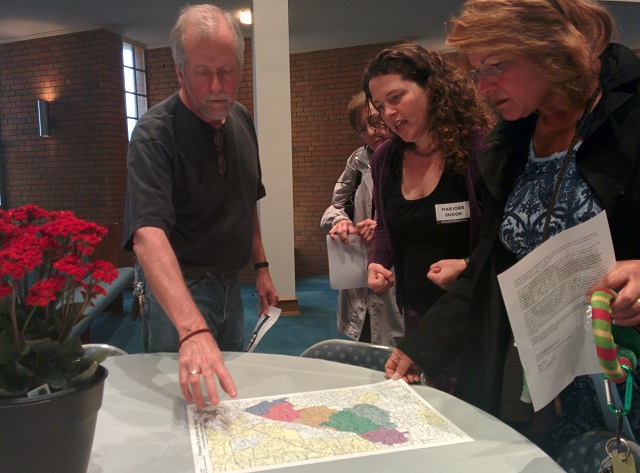 A proposal to annex Druid Hills into Atlanta failed in the Legislature this year, but discussion about it was alive and well during a voter information meeting on April 16.

The event, held at Clairmont Hills Church, drew about 100 people. There was no official representation from groups in support of the proposed cities of Tucker and LaVista Hills.

When asked for his take on some of the information presented during the meeting, LaVista Hills Yes Chairperson Allen Venet said, “I cannot comment on something I have not seen. I can say that we at LaVista Hills YES were thrilled that an enthusiastic crowd packed our volunteer meeting this past Monday.” The city of Tucker movement did not provide any statement regarding the meeting.

Bills calling for referendums on both cities did make it through the 2015 legislative session. The Atlanta annexation proposal died for lack of support in the Legislature.  As Snook pointed out, the Tucker and LaVista Hills cityhood proposals would have no effect on school attendance zones. All schools in the proposed new cities would remain in DeKalb County Schools.

And yet, Trenton Arnold, Regional Superintendent for the DeKalb County School System, was there fielding questions about the failed Atlanta annexation proposal. If the proposal had succeeded, it potentially would’ve brought Druid Hills High, as well as Fernbank and Briar Vista elementary schools, into Atlanta’s public school system. That would’ve disrupted the school feeder pattern for other schools that feed into Druid Hills High: Avondale Elementary, Laurel Ridge Elementary, McLendon Elementary and Druid Hills Middle School. The annexation would’ve also brought Emory University into the city of Atlanta.

“If LaVista Hills is created, I do not think we can stop Atlanta annexation,” Snook said. “We find when people come to these events people want to talk about schools. If you don’t address that issue, they are unhappy. That is the biggest concern of a lot of people. Atlanta annexation will likely come back, I think it will come back much stronger if LaVista Hills gets created. It’s dead in the water if these cities fail.”

Venet does not believe one success of one cityhood proposal will determine whether the Atlanta annexation will be successful.

“None of us has a working crystal ball allowing us to predict future actions of the Georgia General Assembly, or the existing cities, but I personally believe that the assumption is false,” he said. “Except for the relatively small areas of overlapping maps, the cityhood and annexation proposals each stand – or fall – on their own merits. There is absolutely no reason to think that defeat of LaVista Hills would reduce the chances for future annexations by existing cities, and every reason to think that defeat of LaVista Hills will lead to greater annexation activity.”

Attorney Doug Dillard, who specializes in zoning and land use, spoke during the meeting. Dillard said new cities are great for his business because zoning conflicts create more work for his practice. But he said what’s good for him may not be in the best interest of the county.

“The more arbitrary and capricious decisions I can get, the better off I am,” he said. “The problem is we need more government like we need a hole in the head.”

He questioned whether Atlanta could take over those schools if an annexation occurred.

The political back and forth over the LaVista Hills and Tucker proposals is just getting started.

John Bliss attended Thursday’s meeting because he received a robo call asking questions about the proposed city of LaVista Hills. He is in the city’s proposed boundaries.

“It starts off, ‘Are you for or against?’ I said I’m against. It said, ‘Even if taxes don’t go up?’ I said I’m against,” Bliss said. “It kept getting worse and worse. It was leading the answer they want to get from the survey. I’m curious where’s the funding is coming from for these robo calls.”

Other residents who are in the proposed map for the city LaVista Hills have reported receiving similar calls. Venet said the calls aren’t being funded by LaVista Hills YES.

“I received a telephone poll myself, but we do not know who commissioned the poll,” he said.